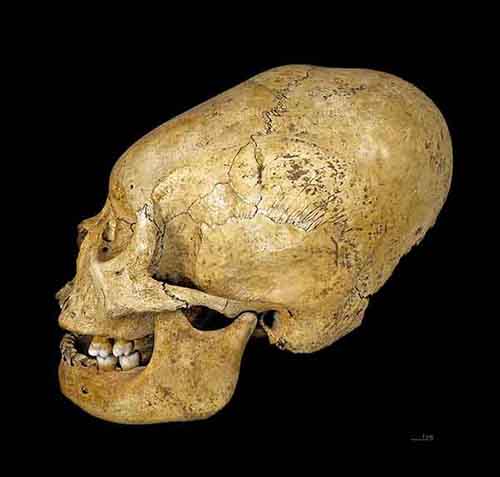 Artificial cranial deformation or modification, head flattening, or head binding is a form of body alteration in which the skull of a human being is deformed intentionally. It is done by distorting the normal growth of a child's skull by applying force. Flat shapes, elongated ones (produced by binding between two pieces of wood), rounded ones (binding in cloth), and conical ones are among those chosen. Typically, it is carried out on an infant, as the skull is most pliable at this time. In a typical case, headbinding begins approximately a month after birth and continues for about six months. Read more


The Conehead skulls or Inca Skulls are deformed human-like skulls associated with the Paracas culture in what is now Peru. They are unnaturally elongated, giving a comparatively pointed shape. Most experts believe they are the result of artificial cranial deformation, a procedure well known by anthropologists in which the skull's shape is modified by tightly binding the head.


Some people believe elongated deformed skulls are those of gray aliens or human-alien hybrids. Only DNA testing can prove they are not human as we quest for truth about our creation, purpose, and future.

The First Evidence of 'Head Cones' Found in 3,300-Year-Old Egyptian Tomb   Live Science - December 11, 2019
Ancient Egyptians have long been depicted wearing so-called head cones, but until now, archaeologists had no physical evidence of their existence. Now, two such head cones, made of wax, have been discovered on the skulls of two individuals buried about 3,300 years ago at the site of Amarna in Egypt. Between 1550 B.C. and 30 B.C., Egyptian art depicted people wearing what look like cones on their heads. Because no examples of these cones had ever been found, archaeologists wondered whether they actually existed or were an artistic motif that had no basis in reality (similar to people with halos over their heads depicted in Christian art).


New insights into the origin of elongated heads in early medieval Germany   Science Daily - March 13, 2018
A palaeogenomic study investigates early medieval migration in southern Germany and the peculiar phenomenon of artificial skull deformation. In an interdisciplinary study, the international research team analyzed the ancient genomes of almost 40 early medieval people from southern Germany. While most of the ancient Bavarians looked genetically like Central and Northern Europeans, one group of individuals had a very different and diverse genetic profile. Members of this group were particularly notable in that they were women whose skulls had been artificially deformed at birth. Such enigmatic deformations give the skull a characteristic tower shape and have been found in past populations from across the world and from different periods of time.

Parents wrapped their children's heads with bandages for a few months after birth in order to achieve the desired head shape. It is difficult to answer why they carried out this elaborate process, but it was probably used to emulate a certain ideal of beauty or perhaps to indicate a group affiliation. So far, scholars have only speculated about origins of the practice in medieval Europe. The presence of these elongated skulls in parts of eastern Europe is most commonly attributed to the nomadic Huns, led by Atilla, during their invasion of the Roman Empire from Asia, but the appearance of these skulls in western Europe is more mysterious, as this was very much the fringes of their territory. 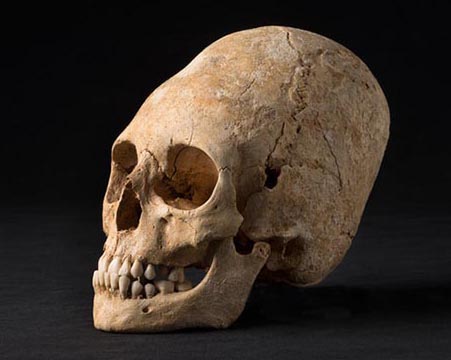 The skeleton of an ancient aristocratic woman whose head was warped into a deformed, pointy shape has been unearthed in a necropolis in France. The necropolis, found in the Alsace region of France, contains 38 tombs that span more than 4,000 years, from the Stone Age to the Dark Ages. The Obernai region where the remains were found contains a river and rich, fertile soil, which has attracted people for thousands of years.