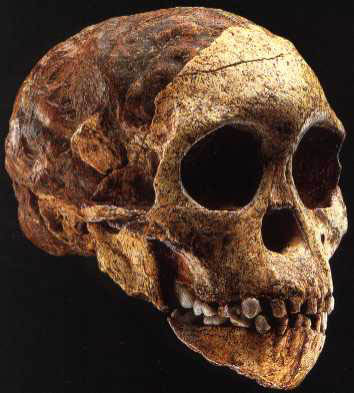 Mummies with elongated skulls are found in many ancient civilizations.

Ancient skulls give clues to China human history   BBC - March 3, 2017
Two skulls found in China shed light on the ancient humans who inhabited the region before our own species arrived. We know that Europe and western Asia was dominated by the Neanderthals before Homo sapiens displaced them. But remains belonging to equivalent populations in East and Central Asia have been scarce. It's unclear if the finds are linked to the Denisovans, a mysterious human group known only from DNA analysis of a tooth and finger bone from Siberia.


Skull clue to exodus from Africa   BBC - January 28, 2015
An ancient skull discovered in Israel could shed light on the migration of modern humans out of Africa some 60,000 years ago. This migration led to the colonization of the entire planet by our species, as well as the extinction of other human groups such as the Neanderthals. The skull from Manot Cave dates to 55,000 years ago and may be the closest we've got to finding one of the earliest migrants from Africa.


Deformed, Pointy Skull from Dark Ages Unearthed in France   Live Science - November 15, 2013
The skeleton of an ancient aristocratic woman whose head was warped into a deformed, pointy shape has been unearthed in a necropolis in France. The necropolis, found in the Alsace region of France, contains 38 tombs that span more than 4,000 years, from the Stone Age to the Dark Ages. The Obernai region where the remains were found contains a river and rich, fertile soil, which has attracted people for thousands of years.


Early Human Skulls Shaped for Nut-Cracking   PhysOrg - February 3, 2009
Study: ancient human skull structure and found that a 2 million-year-old early human relative likely ingested large nuts and seeds that may have been foods of last resort. The team tested long-standing, influential ideas suggesting that early human skulls were structurally buttressed to resist stress in the face when biting with the premolar teeth, also known as bicuspids, on small, hard objects or when chewing large volumes of food using many teeth at once.


Ancient skull found in Ethiopia   BBC - March 27, 2006
Fossil hunters in Ethiopia have unearthed an ancient skull which they say could be a "missing link" between Homo erectus and modern people. The cranium was found in two pieces and is believed by its discoverers to be between 500,000 and 250,000 years old. The skull appeared "to be intermediate between the earlier Homo erectus and the later Homo sapiens," Sileshi Semaw, an Ethiopian research scientist at the Stone Age Institute at Indiana University, US, told a news conference in Addis Ababa.


Oldest skull found in Ethiopia - 2 adult males - 1 child   BBC - June 11, 2003
Three fossilized skulls unearthed in Ethiopia are said by scientists to be among the most important discoveries ever made in the search for the origin of humans. The crania of two adults and a child, all dated to be around 160,000 years old, were pulled out of sediments near a village called Herto in the Afar region in the east of the country. They are described as the oldest known fossils of modern humans, or Homo sapiens. What excites scientists so much is that the specimens fit neatly with the genetic studies that have suggested this time and part of Africa for the emergence of mankind. The skulls are not an exact match to those of people living today; they are slightly larger, longer and have more pronounced brow ridges.


160,000-Year-Old Fossilized Skulls From Ethiopia Are Oldest Modern Humans   Science Daily - June 12, 2003
The fossilized skulls of two adults and one child discovered in the Afar region of eastern Ethiopia have been dated at 160,000 years, making them the oldest known fossils of modern humans, or Homo sapiens. The skulls, dug up near a village called Herto, fill a major gap in the human fossil record, an era at the dawn of modern humans when the facial features and brain cases we recognize today as human first appeared. The fossils date precisely from the time when biologists using genes to chart human evolution predicted that a genetic "Eve" lived somewhere in Africa and gave rise to all modern humans.