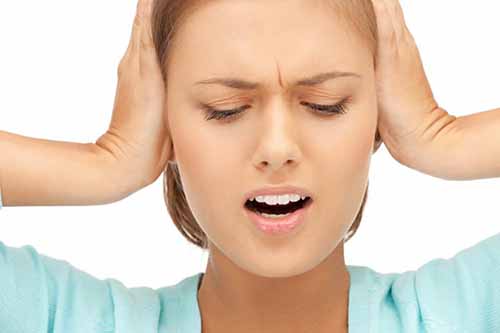 In the world of metaphysics I have read clients who believe the noises associated with tinnitus are not a physical symptom of a medical condition but something linked to the paranormal. They may believe they are connecting to some sort of extrasensory frequency, UFOs, government experiments, or something else in that field. One must be very careful crossing the line here from a physical problem into a metaphysical solution.


Tinnitus is the perception of sound within the human ear ("ringing of the ears") when no external sound is present. Despite the origin of the name, "ringing" is only one of many sounds the person may perceive.

Tinnitus is not a disease, but a condition that can result from a wide range of underlying causes. The most common cause is noise-induced hearing loss. Other causes include neurological damage (multiple sclerosis), ear infections, oxidative stress, emotional stress, foreign objects in the ear, nasal allergies that prevent (or induce) fluid drain, earwax build-up, and exposure to loud sounds. Withdrawal from benzodiazepines may cause tinnitus as well. Tinnitus may be an accompaniment of sensorineural hearing loss or congenital hearing loss, or it may be observed as a side effect of certain medications (ototoxic tinnitus).

If there is an underlying cause, treating it may lead to improvements. Otherwise typically management involves talk therapy. As of 2013, there are no effective medications. It is common, affecting about 10-15% of people. Most however tolerate it well, with it being a significant problem in only 1-2% of people. Read more


Tinnitus mapped inside human brain   BBC - April 23, 2015
For the first time, signals relating to the constant ringing noise of tinnitus have been mapped across the brain of a patient undergoing surgery. In this rare case, a man with tinnitus was being monitored to trace his epileptic seizures, with 164 electrodes placed directly onto his brain. Tinnitus, the constant presence of phantom sounds, affects around 10% of adults in the UK; for 1% it is severe enough to affect their quality of life. Often it takes the form of a ringing sound, but it can be anything from a roar to a hiss.