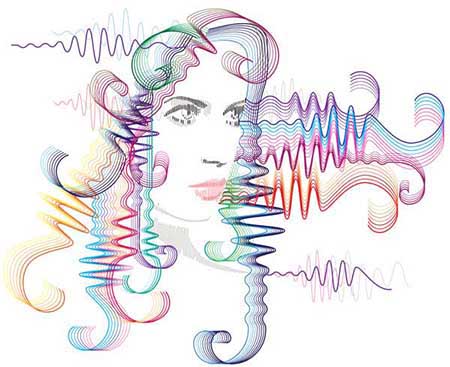 In one common form of synesthesia, known as grapheme -> color synesthesia or color-graphemic synesthesia, letters or numbers are perceived as inherently colored, while in ordinal linguistic personification, numbers, days of the week and months of the year evoke personalities. In spatial-sequence, or number form synesthesia, numbers, months of the year, and/or days of the week elicit precise locations in space (for example, 1980 may be "farther away" than 1990), or may have a (three-dimensional) view of a year as a map (clockwise or counterclockwise).

Yet another recently identified type, visual motion -> sound synesthesia, involves hearing sounds in response to visual motion and flicker. Over 60 types of synesthesia have been reported by people, but only a fraction has been evaluated by scientific research. Even within one type, synesthetic perceptions vary in intensity and people vary in awareness of their synesthetic perceptions.

While cross-sensory metaphors (e.g., "loud shirt," "bitter wind" or "prickly laugh") are sometimes described as "synesthetic," true neurological synesthesia is involuntary. It is estimated that synesthesia could possibly be as prevalent as 1 in 23 persons across its range of variants.

Synesthesia runs strongly in families, but the precise mode of inheritance has yet to be ascertained. Synesthesia is also sometimes reported by individuals under the influence of psychedelic drugs, after a stroke, during a temporal lobe epilepsy seizure, or as a consequence of blindness or deafness. Synesthesia that arises from such non-genetic events is referred to as "adventitious synesthesia" to distinguish it from the more common congenital forms of synesthesia. Adventitious synesthesia involving drugs or stroke (but not blindness or deafness) apparently only involves sensory linkings such as sound -> vision or touch -> hearing; there are few, if any, reported cases involving culture-based, learned sets such as graphemes, lexemes, days of the week, or months of the year.

Although synesthesia was the topic of intensive scientific investigation in the late 1800s and early 1900s, it was largely abandoned by scientific research in the mid-20th century, and has only recently been rediscovered by modern researchers.

Psychological research has demonstrated that synesthetic experiences can have measurable behavioral consequences, while functional neuroimaging studies have identified differences in patterns of brain activation.

Many people with synesthesia use their experiences to aid in their creative process, and many non-synesthetes have attempted to create works of art that may capture what it is like to experience synesthesia. Psychologists and neuroscientists study synesthesia not only for its inherent interest, but also for the insights it may give into cognitive and perceptual processes that occur in synesthetes and non-synesthetes alike. Read more ...

Psychologists discover enhanced language learning in synesthetes   Medical Express - May 15, 2019
"When I see equations, I see the letters in colors. I don't know why," wrote Nobel Prize-winning physicist Richard Feynman. "I see vague pictures of Bessel functions with light-tan j's, slightly violet-bluish n's, and dark brown x's flying around." Feynman was describing his grapheme-color (GC) synesthesia Đ a condition in which individuals sense colours associated with letters and numbers. Synesthesia is a family of conditions where individuals perceive stimulation through more than one sense. GC synesthesia is just one form. In others, musical notes evoke colors; words have associated tastes; sequences of numbers are sensed as points in space; numbers suggest people, like an elderly man or a baby girl.


Tasting colors? Synesthesia induced with hypnosis   Science Daily - December 13, 2017
Hypnosis can alter the way certain individuals information process information in their brain. A new phenomenon was identified by researchers who have successfully used hypnosis to induce a functional analogue of synesthesia. The discovery can open a window into the previously unexplored domains of cognitive neuroscience. Synesthesia is generally understood to be a rare phenomenon where, for example, seeing a certain letter or number is uniformly accompanied by an automatic association to or a visual perception of a color.


The Woman Who Sees Time as a Hula Hoop   The Atlantic - November 30, 2016
Imagine a calendar. Chances are you just thought about a rectangular grid, with time progressing from the top-left to the bottom-right. But around one percent of you may have pictured something different - a V, for example, or a hoop encircling your head. These weird shapes are called "calendar forms." They're a type of synesthesia - the mental phenomenon where people involuntarily map one type of sensation onto another. Some associate letters or numbers with colors, others taste sounds or see smells, and people with calendar forms map time onto space. Sure, everyone does that to an extent - for example, we might picture numbers on a line going from left to right. But calendar forms are especially vivid and perceptually real - people actually see the units of time occupying the space around their bodies.


Associating Colors with Letters: Clues to Synesthesia   Live Science - September 21, 2016
People with an unusual condition called synesthesia, which makes them experience a "mixing" of their senses, may automatically form stronger mental links between the sound of a word and the image that word conjures up in their mind, according to a small new study. About 1 to 4 percent of people have synesthesia. In one of its most common forms, people who are looking at colors might associate them with certain letters, or numbers, or sounds. For example, a person with synesthesia might always perceive the letter "Y" as blue or yellow, even when that individual sees it in black print.


Synesthesia Taught To Adults With Colored Letters And Memory Tests   Medical Daily - November 19, 2014
Most synesthesia studies rely on a phenomenon in color psychology known as the Stroop Effect. It presents the test taker with a list of colors - Yellow, Green, Blue - each written in a typeface of a different color than what the word says. The word yellow may be written in red ink, for instance, and the word blue may actually appear yellow. The person taking the test has to say the color of the text, not read the word. Most of the time, it's difficult. But for synesthetes, the task isn't as hard because colors and words already have concrete associations in their brains. They have an easier time 'hooking' onto the desired color.

Hoping to mimic these effects, a team led by neuroscientist Daniel Bor recruited 14 people to undergo extensive training in the lab. For weeks, the participants read from specially designed colored e-books and spent half-hour chunks of time learning 13 letter-color associations. The goal was to engrain these cross-dimensional concepts as one codified unit, much like actual synesthetes taste words and see sound. By the five-week mark, many of the participants had begun seeing colored letters instead of black text in their lab tests.


Why It Pays to Taste Words and Hear Colors   Live Science - November 22, 2011
While most of us see sights and hear sounds, some people also hear colors and taste words, a mysterious phenomenon called synesthesia, which occurs when stimulating one of the five senses triggers experiences in an unrelated sense. Now researchers suggest this unusual trait can provide numerous mental benefits, potentially explaining why evolution has kept it around


Brain study explores what makes colors and numbers collide   PhysOrg - November 17, 2011
Someone with the condition known as grapheme-color synesthesia might experience the number 2 in turquoise or the letter S in magenta. Now, researchers reporting their findings online - have shown that those individuals also show heightened activity in a brain region responsible for vision. The findings provide a novel way of looking at synesthesia as the product of regional hyperexcitability in the brain, the researchers say. They also provide a window into our understanding of individual differences in perception. Not only do these grapheme-color synesthetes really see the colors they report, as measured in behavioral tests, but functional magnetic resonance imaging (fMRI) of their brains also shows activation in the color-selective regions of the cortex when they view black-and-white letters or numbers.