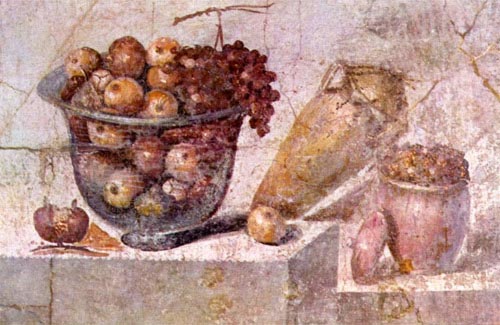 Ancient Roman culture existed throughout the almost 1200-year history of the civilization of Ancient Rome. The term refers to the culture of the Roman Republic, later the Roman Empire, which, at its peak, covered an area from Lowland Scotland and Morocco to the Euphrates.

Life in ancient Rome revolved around the city of Rome, its famed seven hills, and its monumental structures such as the Flavian Amphitheatre (now called the Colosseum), the Forum of Trajan, and the Pantheon.

The city also had several theaters, gymnasiums, and many taverns, baths, and brothels. Throughout the territory under ancient Rome's control, residential architecture ranged from very modest houses to country villas, and in the capital city of Rome, there were imperial residences on the elegant Palatine Hill, from which the word "palace" is derived. The vast majority of the population lived in the city center, packed into insulae (apartment blocks).

The city of Rome was the largest megalopolis of that time, with a population that may well have exceeded one million people, with a high end estimate of 3.5 million and a low end estimate of 450,000. The public spaces in Rome resounded with such a din of hooves and clatter of iron chariot wheels that Julius Caesar had once proposed a ban on chariot traffic at night. Historical estimates indicate that around 30 percent of the population under the city's jurisdiction lived in innumerable urban centers, with population of at least 10,000 and several military settlements, a very high rate of urbanization by pre-industrial standards.

The most urbanized part of the Empire was Italy, which had an estimated rate of urbanization of 32%, the same rate of urbanization of England in 1800. Most Roman towns and cities had a forum, temples and the same type of buildings, on a smaller scale, as found in Rome. The large urban population required an endless supply of food which was a complex logistical task, including acquiring, transporting, storing and distribution of food for Rome and other urban centers. Italian farms supplied vegetables and fruits, but fish and meat were luxuries. Aqueducts were built to bring water to urban centers and wine and oil were imported from Hispania, Gaul and Africa.

There was a very large amount of commerce between the provinces of the Roman Empire, since its transportation technology was very efficient. The average costs of transport and the technology were comparable with 18th-century Europe. The later city of Rome did not fill the space within its ancient Aurelian walls until after 1870.

Eighty percent of the population under the jurisdiction of ancient Rome lived in the countryside in settlements with less than 10 thousand inhabitants. Landlords generally resided in cities and their estates were left in the care of farm managers.

The plight of rural slaves was generally worse than their counterparts working in urban aristocratic households. To stimulate a higher labor productivity most landlords freed a large number of slaves and many received wages. Some records indicate that "as many as 42 people lived in one small farm hut in Egypt, while six families owned a single olive tree." Such a rural environment continued to induce migration of population to urban centers until the early 2nd century, when the urban population stopped growing and started to decline.

Starting in the middle of the 2nd century BC, private Greek culture was increasingly in ascendancy, in spite of tirades against the "softening" effects of Hellenized culture from the conservative moralists. By the time of Augustus, cultured Greek household slaves taught the Roman young (sometimes even the girls); chefs, decorators, secretaries, doctors, and hairdressers - all came from the Greek East. Greek sculptures adorned Hellenistic landscape gardening on the Palatine or in the villas, or were imitated in Roman sculpture yards by Greek slaves. The Roman cuisine preserved in the cookery books ascribed to Apicius is essentially Greek. Roman writers disdained Latin for a cultured Greek style. Only in law and governance was the Italic nature of Rome's accretive culture supreme.

Against this human background, both the urban and rural setting, one of history's most influential civilizations took shape, leaving behind a cultural legacy that survives in part today.