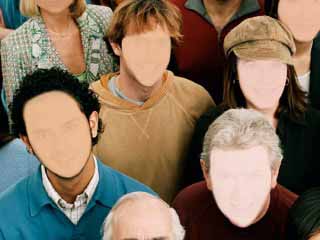 Prosopagnosia (sometimes known as face blindness) is a rare disorder of face perception where the ability to recognize faces is impaired, although the ability to recognize objects may be relatively intact. It usually appears to result from brain injury or neurological illness affecting specific areas of the brain, although more recently cases of congenital or developmental prosopagnosia have also been reported.

Few successful therapies have so far been developed for affected people, although individuals often learn to use 'piecemeal' or 'feature by feature' recognition strategies. This may involve secondary clues such as clothing, hair color or voice. Because the face seems to function as an important identifying feature in memory, it can also be difficult for people with this condition to keep track of information about people.

Some people also use the term prosophenosia, which refers to the inability to recognize faces following extensive damage of both occipital and temporal lobes.

Selective inabilities to recognize faces were reported throughout the 19th century, and included case studies by Hughlings Jackson and Charcot. However, it was not named until the term prosopagnosia was first used in 1947 by Joachim Bodamer, a German neurologist.

He described three cases, including a 24-year old man who suffered a bullet wound to the head and lost his ability to recognise his friends, family, and even his own face. However, he was able to recognize and identify them through other sensory modalities such as auditory, tactile, and even other visual stimuli patterns (such as gait and other physical mannerisms). Bodamer gave his paper the title Die Prosop-Agnosie, derived from classical Greek prosopon meaning "face" and agnosia meaning "non-knowledge".

This sort of evidence has been crucial in supporting the theory that there may be a specific face perception system in the brain. This is counter-intuitive to many people as we do not experience faces as 'special' or perceived in a different way from the rest of the world.

There is some debate about the specificity of both face perception and prosopagnosia and some people have argued that it is just a subtype of visual agnosia.

While prosopagnosia is often accompanied by problems with recognizing visual objects, cases have been reported where perception for faces seems to be selectively impaired.

It has also been argued that prosopagnosia may be a general impairment in understanding how individual perceptual components make up the structure or gestalt of an object. Psychologist Martha Farah has been particularly associated with this view.

Aperceptive prosopagnosia is thought to be a disorder of some of the earliest processes in the face perception system. People with this disorder cannot make any sense of faces and are unable to make same-different judgements when they are presented with pictures of different faces. They may also be unable to work out attributes such as age or gender from a face. However, they may be able to recognize people based on non-face clues such as their clothing, hairstyle or voice.

Associative prosopagnosia is thought to be an impairment to the links between early face perception processes and the semantic information we hold about people in our memories. People with this form of the disorder may be able to say whether photos of people's faces are the same or different and derive the age and gender from a face (suggesting they can make sense of some face information) but may not be able to subsequently identify the person or provide any information about them such as their name, occupation or when they were last encountered. They may be able to recognize and produce such information based on non-face information such as voice, hair, or even particularly distinctive facial features (such as a distinctive moustache) that does not require the structure of the face to be understood. Typically such people do not report that 'faces make no sense' but simply that they do not look distinctive in any way.

Prosopagnosia was originally thought only to be solely associated with brain injury, acquired during adulthood, or more rarely during childhood development. However, recent evidence has suggested that there may be a form of 'congenital prosopagnosia', and that some people are born with a selective impairment in recognizing and perceiving faces. The cases that have been reported suggest that this form of the disorder may be highly variable and there is some suggestion that it may be heritable.

Developmental disorders such as autism and Williams Syndrome are known to also involve differences in face perception, but the mechanism by which these effects take place is largely unknown.

One particularly interesting feature of prosopagnosia is that it suggests both a conscious and unconscious aspect to face recognition. Experiments have shown that when presented with a mixture of familiar and unfamiliar faces, people with prosopagnosia may be unable to successfully identify the people in the pictures, or even make a simple familiarity judgement ("this person seems familiar / unfamiliar"). However, when a measure of emotional response is taken (typically a measure of skin conductance) there tends to be an emotional response to familiar people even though no conscious recognition takes place.

This suggests emotion plays a significant role in face recognition, perhaps unsurprising when basic survival (particularly security) relies on identifying the people around you.

It is thought that Capgras delusion may be the reverse of prosopagnosia. In this condition people report conscious recognition of people from faces, but show no emotional response, perhaps leading to the delusional belief that their relative or spouse has been replaced by an impostor. Prosopagnosia


Agnosia is the loss of ability to recognize objects, persons, sounds, shapes or smells while the specific sense is not defective nor is there any significant memory loss. It is usually associated with brain injury or neurological illness, particularly after damage to the temporal lobe.