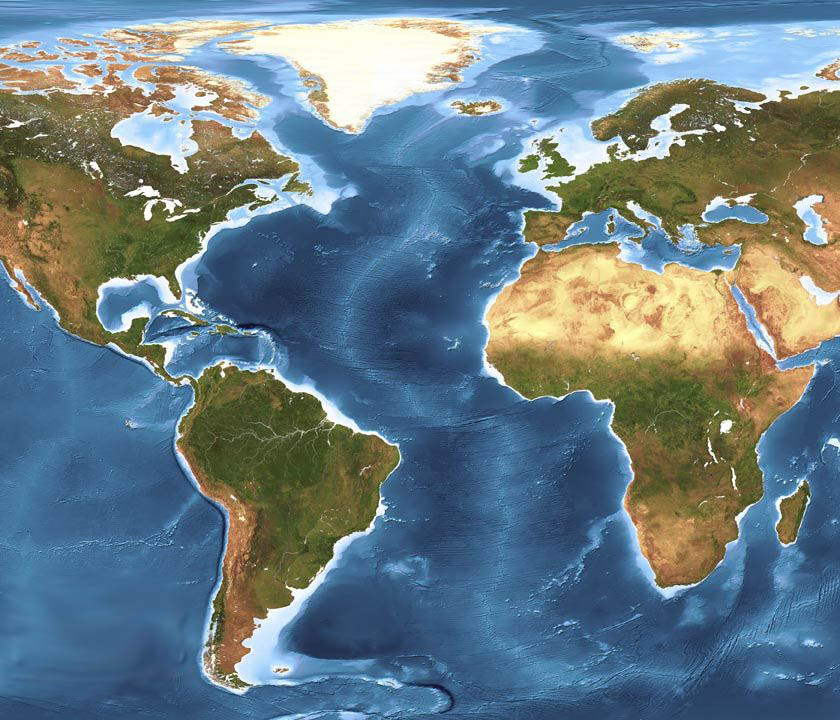 The Mid-Atlantic Ridge (MAR) is a mid-ocean ridge, a divergent tectonic plate boundary located along the floor of the Atlantic Ocean, and the longest mountain range in the world. It separates the Eurasian Plate and North American Plate in the North Atlantic, and the African Plate from the South American Plate in the South Atlantic. The Ridge extends from a junction with the Gakkel Ridge (Mid-Arctic Ridge) northeast of Greenland southward to the Bouvet Triple Junction in the South Atlantic. Although the Mid-Atlantic Ridge is mostly an underwater feature, portions of it have enough elevation to extend above sea level. The section of the ridge which includes the island of Iceland is also known as the Reykjanes Ridge. 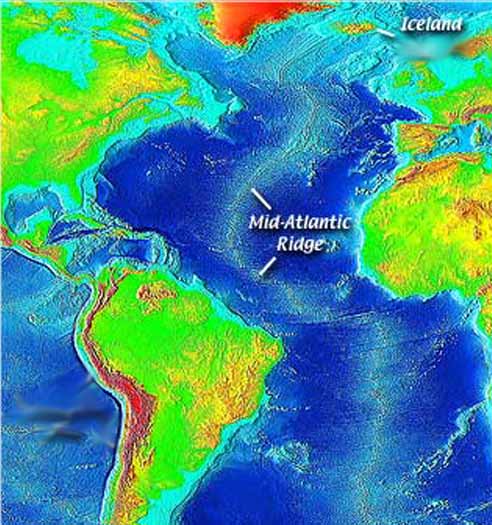 A ridge under the Atlantic Ocean was first inferred by Matthew Fontaine Maury in 1850. The ridge was discovered during the expedition of HMS Challenger in 1872. A team of scientists on board, led by Charles Wyville Thomson, discovered a large rise in the middle of the Atlantic while investigating the future location for a transatlantic telegraph cable. The existence of such a ridge was confirmed by sonar in 1925 and was found to extend around the Cape of Good Hope into the Indian Ocean by the German Meteor expedition.

In the 1950s, mapping of the Earth's ocean floors by Bruce Heezen, Maurice Ewing, Marie Tharp and others revealed the Mid-Atlantic Ridge to have a strange bathymetry of valleys and ridges, with its central valley being seismologically active and the epicentre of many earthquakes. Ewing and Heezen discovered the ridge to be part of a 40,000-km-long essentially continuous system of mid-ocean ridges on the floors of all the Earth's oceans. The discovery of this worldwide ridge system led to the theory of seafloor spreading and general acceptance of Wegener's theory of continental drift and expansion as plate tectonics.

The ridge sits atop a geologic feature known as the Mid-Atlantic Rise which is a progressive bulge that runs the length of the Atlantic Ocean, with the ridge resting on the highest point of this linear bulge. This bulge is thought to be caused by upward convective forces in the asthenosphere pushing the oceanic crust and lithosphere.

This divergent boundary first formed in the Triassic period when a series of three-armed grabens coalesced on the supercontinent Pangaea to form the ridge. Usually only two arms of any given three-armed graben become part of a divergent plate boundary. The failed arms are called aulacogens, and the aulacogens of the Mid-Atlantic Ridge eventually became many of the large river valleys seen along the Americas and Africa (including the Mississippi River, Amazon River and Niger River). The ridge is about 2,500 meters (8,200 ft) below sea level, while its flank is about 5,000 metres deeper. The Fundy Basin on the Atlantic coast of North America between New Brunswick and Nova Scotia in Canada is evidence of the ancestral Mid-Atlantic Ridge.


Notable Features Along the Ridge

The Mid-Atlantic Ridge includes a deep rift valley which runs along the axis of the ridge along nearly its entire length. This rift marks the actual boundary between adjacent tectonic plates, where magma from the mantle reaches the seafloor, erupting as lava and producing new crustal material for the plates. Near the equator, the Mid-Atlantic Ridge is divided into the North Atlantic Ridge and the South Atlantic Ridge by the Romanche Trench, a narrow submarine trench with a maximum depth of 7,758 m (25,453 ft), one of the deepest locations of the Atlantic Ocean. This trench, however, is not regarded as the boundary between the North and South American Plates, nor the Eurasian and African Plates. Read more 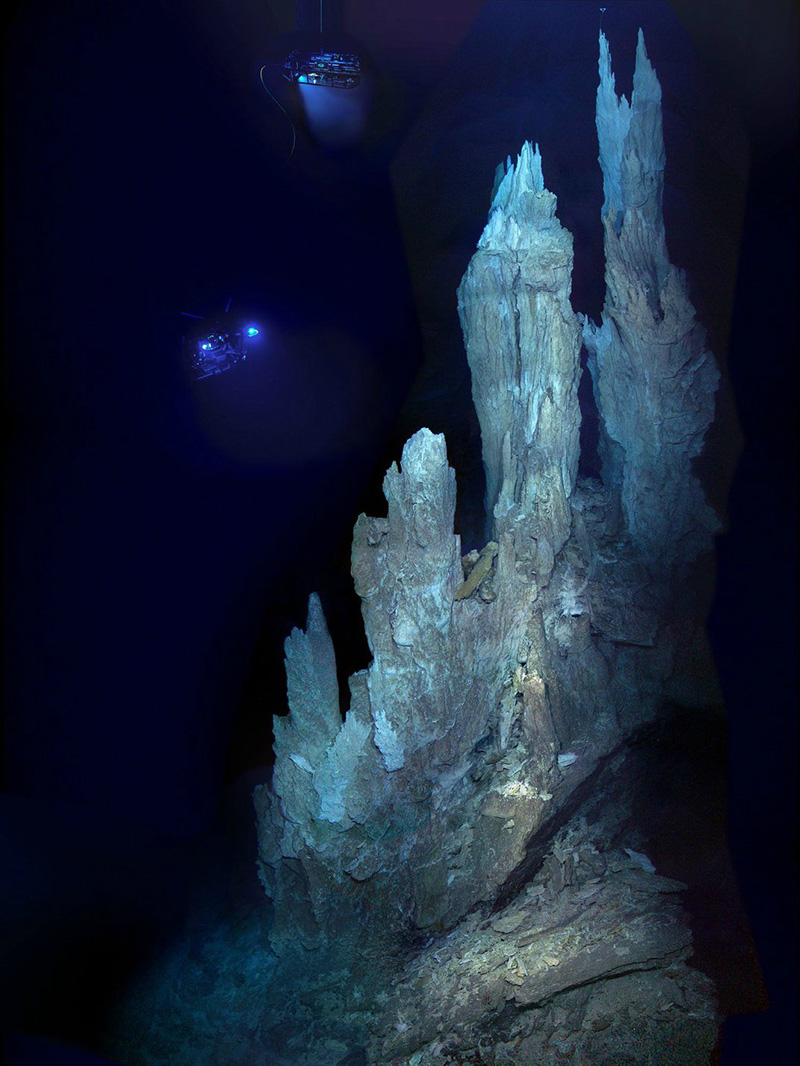 There's a 'Lost City' Deep in The Ocean, And It's a Place Unlike Anywhere Else
Science Alert - August 27, 2022

Close to the summit of an underwater mountain west of the Mid-Atlantic Ridge, a jagged landscape of towers rises from the gloom. Their creamy carbonate walls and columns appear ghostly blue in the light of a remotely operated vehicle sent to explore. They range in height from tiny stacks the size of toadstools to a grand monolith standing 60 meters (nearly 200 feet) tall. This is the Lost City.

Discovered by scientists in 2000, more than 700 meters (2,300 feet) beneath the surface, the Lost City Hydrothermal Field is the longest-lived venting environment known in the ocean. Nothing else like it has ever been found. For at least 120,000 years and maybe longer, the upthrusting mantle in this part of the world has reacted with seawater to puff hydrogen, methane, and other dissolved gases out into the ocean. In the cracks and crevices of the field's vents, hydrocarbons feed novel microbial communities even without the presence of oxygen. Continue reading


Islands on the Mid-Atlantic Ridge

The islands, from north to south, with their respective highest peaks and location, are:

Jan Mayen in the Arctic Ocean

Iceland through which the ridge runs

Azores (Ponta do Pico or Pico Alto, on Pico Island)

Bermuda was formed on the ridge, but is now considerably west of it 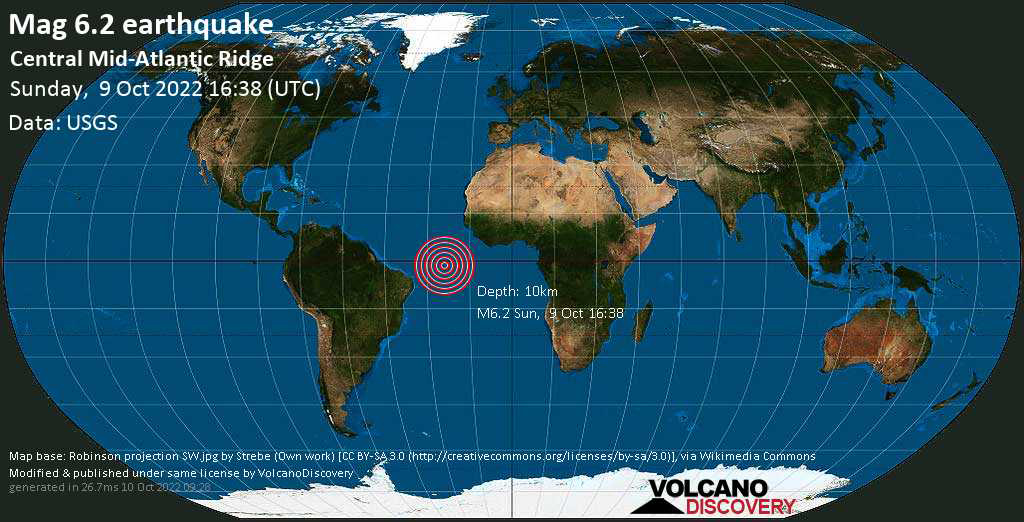 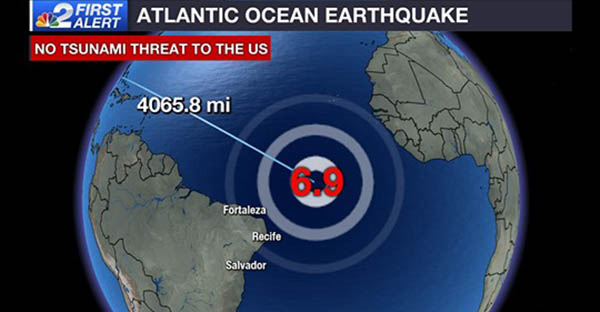 The rise of the Mid-Atlantic Ridge

I always pay attention to the Mid-Atlantic Ridge as a precursor for end times. Most people follow increasing earthquake activity in the Pacific as well as the recently split Indian Ocean Plate but I live on the Atlantic seaboard and this is what rings true for me. The bottom line is all of the tectonic plates are broken so it's just a matter of time until the first 'domino' falls as the others follow suit. This is most likely what what Edgar Cayce considered Atlantis Rising at the end of time.


A volcanic eruption on Iceland 'could be imminent' after more than 18,000 earthquakes hit the island in the past week alone   Daily Mail - March 4, 2021
The sudden burst in seismic activity has been centred around Reykjanes Peninsula, a densely populated region in southwest Iceland just south of capital city Reykjav’k. Icelandic authorities are now expecting two volcanoes on the Reykjanes Peninsula - Mount Keilir and Mount Fagradalsfjall - to erupt in the coming hours. A volcanic eruption would be the first in the area since the 12th century.


The Atlantic Ocean is widening. Here's why.   Live Science - January 28, 2021
The Atlantic Ocean is getting wider, shoving the Americas to one side and Europe and Africa to the other. But it's not known exactly how. A new study suggests that deep beneath the Earth's crust, in a layer called the mantle, sizzling-hot rocks are rising up and pushing on tectonic plates - those rocky jigsaw pieces that form Earth's crust - that meet beneath the Atlantic. Previously, scientists thought that the continents were mostly being pulled apart as the plates beneath the ocean moved in opposite directions and crashed into other plates, folding under the force of gravity. But the new study suggests thatŐs not the whole picture. The research began in 2016, when a group of researchers set sail on a research vessel to the widest part of the Atlantic Ocean between South America and Africa; in other words, to the middle of nowhere.


At this point in history most of the oceanic ridges are active as the tectonic plates break. 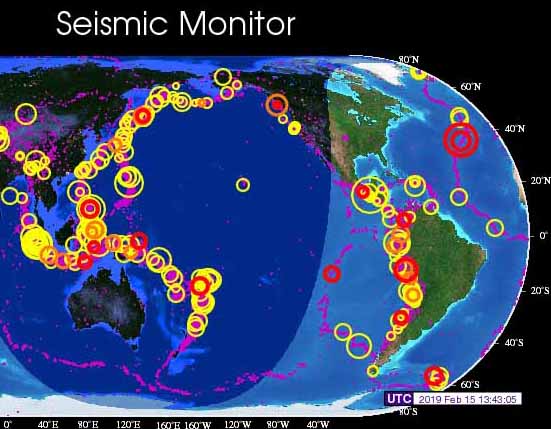 An earthquake measuring 6.2 on the Richter Scale struck northern Mid-Atlantic Range region. The quake hit at a depth of 10 km and took place at 7:57 pm, according to United States Geological Survey (USGS). No tsunami warning has been issued so far. The Mid-Atlantic Ridge is a mid-ocean ridge located along the floor of the Atlantic Ocean. In the North Atlantic, the ridge separates the Eurasian and North American plates, and in the South Atlantic, it separates the African and South American plates. 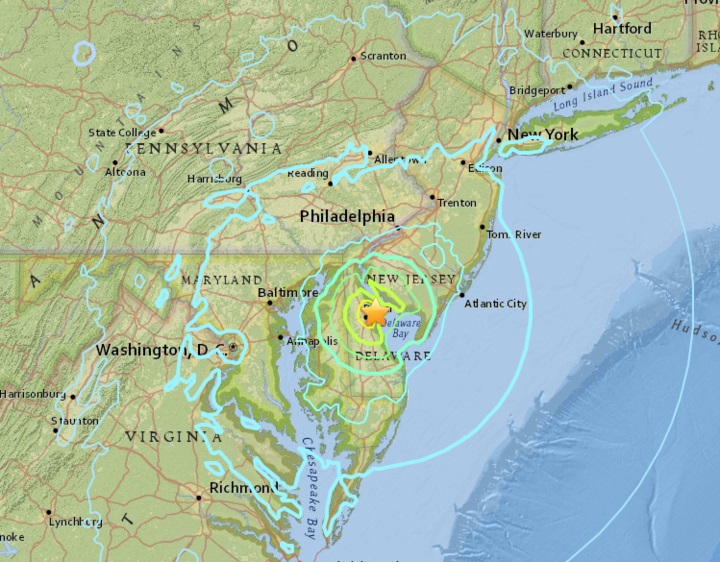 At the end of another busy day, I was relaxing on my couch watching TV when suddenly I felt things shaking. In the way memories connect in the matrix of one's grid consciousness, my thoughts instantly went to the 2011 West Virginia earthquake that shook my area and apartment, but this time it didn't feel as powerful.

I live on the top floor of a six-story building, where one is more likely to feel an earthquake than on the lower floors, a fact I learned during the 2011 quake. Over the past few months roofers drilled, banged, and drove tenants crazy removing the old roof and replacing it with a new one, a project that is nearing completion. I reasoned that whatever they were doing created a shimmy in my apartment ... until I investigated further only to discover Delaware had a 4.1 earthquake that was felt from New York to Baltimore where my Mom's family lives. Aftershocks are expected in the Dover area over the next few days


A favorite plant that fell off the shelf during the earthquake 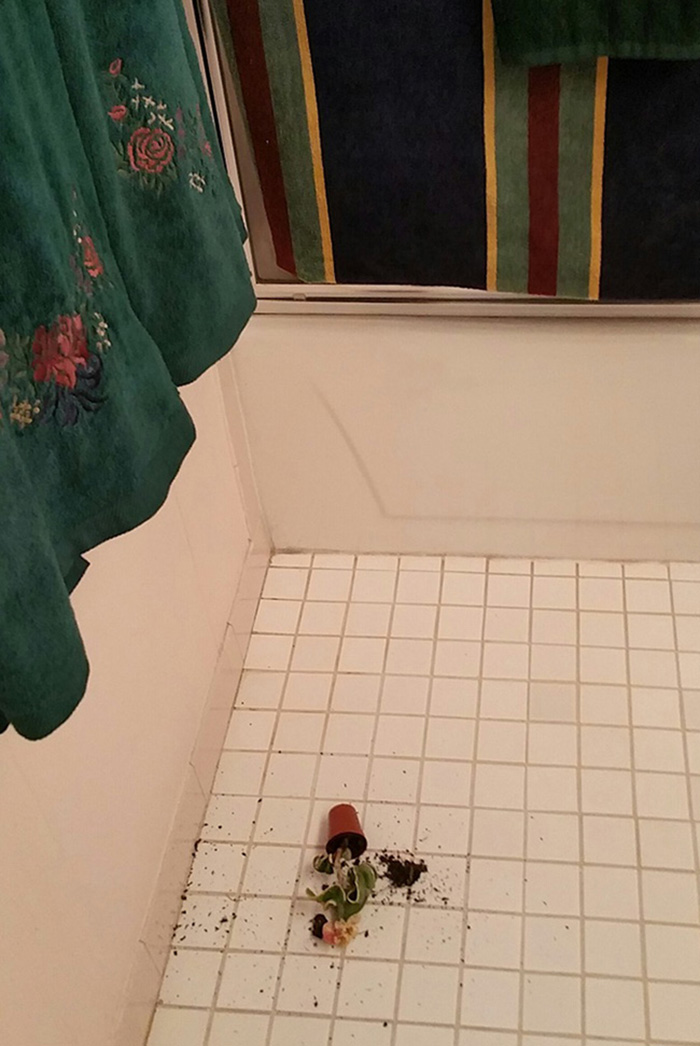 I rescued the plant, put it back on the shelf, and hope it will be okay.
I always prepare my plants for earthquakes ... and they know.
This little guy has lived here for years and should survive. 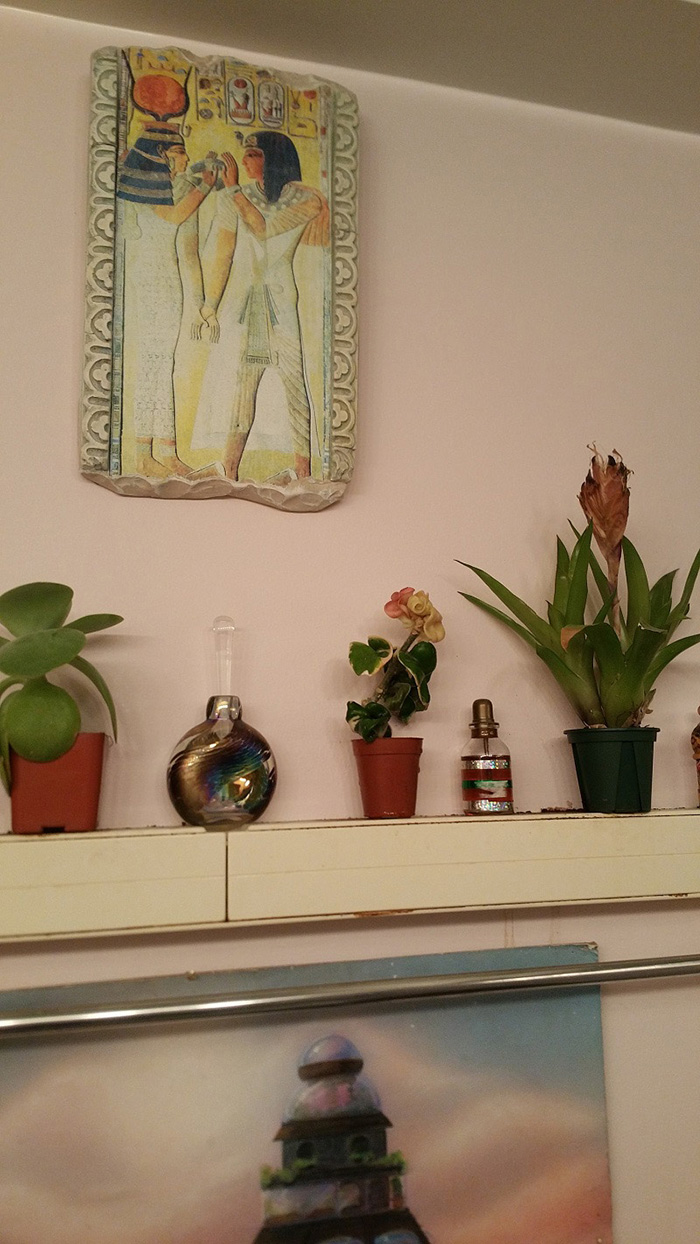 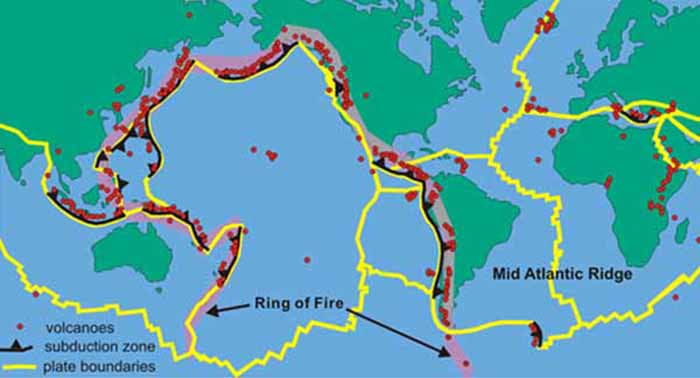 I've "watched", and reported on, increasing activity in the Mid-Atlantic Ridge over the 22 years Crystalinks has been online. Earthquakes have slowly gone from 2.3 -> Thursday's 6.7 earthquake and will continue to increase exponentially until the end of the hologram.

In End Times, the Mid-Atlantic Ridge is rising up, rupturing the Atlantic plate. Psychically, I've watched this for years. The result is increasing earthquake activity along the Atlantic seaboard creating unexpected earthquakes and, as with the Pacific plate, future tsunamis, and other Earth shattering events.

Most people know that the Pacific plate is breaking up particularly those who live along the Pacific Rim where seismic events are the norm. You have watched the increase of earthquake and tsunami activity now predicted to accelerate in 2018 as the Earth's rotation slows. There is no skirting the issue that when plates rupture (interesting that my auto-correct typed "rupture" as "rapture" ) - it will contribute to massive Earth changes especially along coastal areas.

As I live along the Atlantic seaboard, I have always suspected the worst will one day happen ... that moment seemingly in the near future. I have no plans to move inland because once the Atlantic plate ruptures and tsunami activity increases the water will go inland for miles. From what I have been shown this occurs at the end. The Atlantic Ocean Mega-tsunami Theory

Breaking up ... So many things in this reality are broken, I could blog about them forever and most likely will. You already know they extend from our personal experiences to the end of the holographic universe and back ... FADE TO BLACK ... HOLOGRAM DISSOLVES. For now, my plants and I go about our day with the knowing we are part of a simulation that is ending.