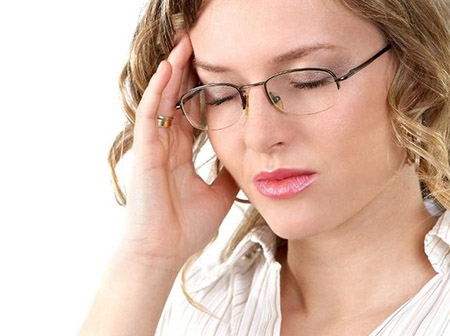 In medicine, a headache or cephalalgia is a symptom of a number of different conditions of the head and sometimes neck. Some of the causes are benign while others are medical emergencies. It ranks among the most common pain complaints. There are a number of different classification systems for headaches. The most well recognized is that of the International Headache Society. Treatment of a headache depends on the underlying etiology or cause, but commonly involves analgesics. Headache 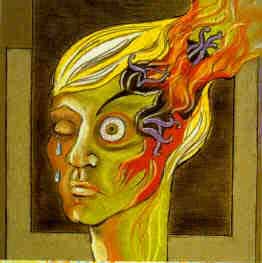 Initial treatment is with analgesics for the head-ache, an anti-emetic for the nausea, and the avoidance of triggering conditions. The cause of migraine headache is unknown; the accepted theory is a disorder of the serotonergic control system, as PET scan has demonstrated the aura coincides with diffusion of cortical depression consequent to increased blood flow (up to 300% greater than baseline). There are migraine headache variants, some originate in the brainstem (featuring intercellular transport dysfunction of calcium and potassium ions) and some are genetically disposed.

Studies of twins indicate a 60 to 65 per cent genetic influence upon their developing propensity to migraine headache. Moreover, fluctuating hormone levels indicate a migraine relation: 75 percent of adult patients are women, although migraine affects approximately equal numbers of prepubescent boys and girls; propensity to migraine headache is known to disappear during pregnancy. Migraines

Cluster headache, nicknamed "suicide headache", is a neurological disease that involves, as its most prominent feature, an immense degree of pain. "Cluster" refers to the tendency of these headaches to occur periodically, with active periods interrupted by spontaneous remissions. The cause of the disease is currently unknown. It affects approximately 0.1% of the population, and men are more commonly affected than women. Cluster headache

Mysterious Changes Identified in The Brains of People Who Get Migraines   Science Alert - November 23, 2022
Using ultra-high-resolution MRI, researchers found that perivascular spaces - fluid-filled spaces around the brain's blood vessels - are unusually enlarged in patients who experience both chronic and episodic migraine.


Study reveals how migraine pain signals are generated - and blocked   Medical Express - February 3, 2022
Migraines affect more than 15 percent of adults, with women twice as likely as men to experience these intense headaches. Calcitonin gene-related peptide (CGRP), a small protein in the nervous system, is known to play an important role in migraine pain; in fact, a new class of drugs to prevent migraines use injections of monoclonal antibodies to target CGRP or its receptors.

It's what some unlucky people dread more than almost anything: the bright flashes of light, seeing shimmering stars, losing vision, or a tingling sensation in their hands or face Đ symptoms called an 'aura', which usually strikes before a migraine headache arrives. Now scientists have detected in mice tsunami-like waves of a brain-signaling molecule that could explain the onset of migraines with auras. At the same time, their findings could help researchers understand other brain conditions such as stroke, epilepsy, and traumatic brain injury. Glutamate is a type of messenger molecule that excites nerve cells in the brain. This includes neurons, which send and receive brain signals, and star-shaped astrocytes, which are specialized support cells that lead clean-up duty in the brain.

What this new study has found is a massive outpouring of glutamate into the space between brain cells in mice, moving with shifts in brain activity already known to occur in people with migraines. Understanding what causes these horrendous headaches is the first step towards finding new treatments for migraines, which could help to relieve more people of their pain, nausea, and vomiting.

The role of glutamate in migraines has been suggested before. People with migraines (migraineurs) have higher levels of glutamate than unaffected individuals, both during and between migraine attacks. But migraines are a fickle beast. Not all migraines are accompanied with an aura Đ only about a third of migraineurs experience them Đ and sometimes people have an aura with little or no headache. Triggers also vary between migraineurs, but can include certain food and drinks, strong smells, bright lights, sun glares, stress, and fatigue. All in all, the root cause of migraines remains poorly understood, though there are some tell-tale signs a migraine is about to occur Đ which leads us back to auras, and a phenomenon called spreading depolarisation. Spreading depolarisation is a sudden shift in brain activity that has been described as "a wave of runaway excitation" in the brain. It's thought to be the basis of the migraine aura, and yet it occurs in other brain conditions too, such as stroke and other forms of brain seizures, which can be measured in people using electrodes.


Having migraines raises the risk of dementia, study finds   Medical Express - September 17, 2019
As if migraines didn't already cause enough suffering, a new study has found that people who experience the debilitating headaches are at much higher risk for Alzheimer's disease. Results show migraine sufferers were three times more likely to have a general dementia diagnosis and four times more likely to have Alzheimer's disease than peers without migraines. The headaches, however, were not associated with vascular dementia, a type of dementia caused by damaged blood vessels in the brain. Dementia is an umbrella term that includes both Alzheimer's and vascular dementia as well as less common types of cognitive decline.


Here's How To Stop A Migraine Before It Destroys Your Whole Day   Huffington Post - July 16, 2015
1. Identify triggers and then avoid them.
2. Regulate stress and sleep.
3. Ask about vitamin supplements
4. Get prescription medication
5. Consider surgical procedures

Migraine sufferers 'may benefit from magnet therapy'   BBC - January 22, 2014
A magnet device can be used to treat some types of migraine, new UK guidance advises. The watchdog NICE says although there is limited evidence, transcranial magnetic stimulation (TMS) may help ease symptoms in some patients. It says that the procedure is still relatively new and that more data is needed about its long-term safety and efficacy. But it may be useful for patients for whom other treatments have failed.


'Aura Migraines' May Increase Women's Heart Attack Risk   Live Science - January 16, 2013
Women whose migraine headaches are accompanied by flashes of light or other changes in vision, called aura, may be at increased risk for a heart attack, a new study suggests. Among women in the study who said they experienced migraines with aura, the rate of cardiovascular events - including heart attack and stroke - was 7.9 events per 1,000 women per year. That's higher than the rate of these events in the overall study population, which was 2.4 per 1,000 women per year