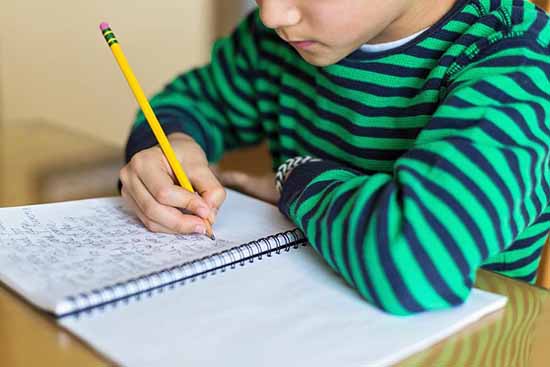 Dysgraphia is a deficiency in the ability to write, primarily handwriting, but also coherence. Dysgraphia is a transcription disability, meaning that it is a writing disorder associated with impaired handwriting, orthographic coding (orthography, the storing process of written words and processing the letters in those words), and finger sequencing (the movement of muscles required to write). It often overlaps with other learning disabilities such as speech impairment, attention deficit disorder, or developmental coordination disorder.

In the Diagnostic and Statistical Manual of Mental Disorders (DSM-IV), dysgraphia is characterized as a learning disability in the category of written expression when onešs writing skills are below those expected given a personšs age measured through intelligence and age-appropriate education. The DSM is not clear in whether or not writing refers only to the motor skills involved in writing, or if it also includes orthographic skills and spelling.

There are at least two stages in the act of writing: the linguistic stage and the motor-expressive-praxic stage. The linguistic stage involves the encoding of auditory and visual information into symbols for letters and written words. This is mediated through the angular gyrus, which provides the linguistic rules which guide writing. The motor stage is where the expression of written words or graphemes is articulated. This stage is mediated by Exneršs writing area of the frontal lobe.

People with dysgraphia can often write on some level and may experience difficulty with other fine motor skills, such as tying shoes. However, dysgraphia does not affect all fine motor skills. People with dysgraphia often have unusual difficulty with handwriting and spelling which in turn can cause writing fatigue. They may lack basic grammar and spelling skills (for example, having difficulties with the letters p, q, b, and d), and often will write the wrong word when trying to formulate their thoughts on paper. The disorder generally emerges when the child is first introduced to writing. Adults, teenagers, and children alike are all subject to dysgraphia.

Dysgraphia should be distinguished from agraphia, which is an acquired loss of the ability to write resulting from brain injury, stroke, or progressive illness. Read more


'Reluctant Writers' May Have A Learning Disability Called Dysgraphia   Huffington Post - August 31, 2017
For many years, my 10-year-old confounded me. She has tested at a ninth-grade reading level and has read classics like L.M. Montgomery's Anne of Green Gables series since the first grade. So, how could a child with such advanced reading and comprehension levels disregard proper syntax and grammar when writing? Why were basic punctuation marks like commas non-existent in every assignment? Why was she failing every spelling test? I soon learned that my daughter, who has an autism spectrum disorder, also has a disability called dysgraphia - or, essentially, 'disabled handwriting.'