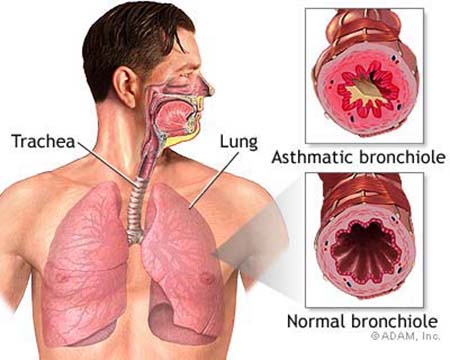 Asthma is a common long-term inflammatory disease of the airways of the lungs. It is characterized by variable and recurring symptoms, reversible airflow obstruction, and bronchospasm. Symptoms include episodes of wheezing, coughing, chest tightness, and shortness of breath. These episodes may occur a few times a day or a few times per week. Depending on the person, they may become worse at night or with exercise. Asthma is thought to be caused by a combination of genetic and environmental factors. Environmental factors include exposure to air pollution and allergens. Other potential triggers include medications such as aspirin and beta blockers. Diagnosis is usually based on the pattern of symptoms, response to therapy over time, and spirometry.

Asthma is classified according to the frequency of symptoms, forced expiratory volume in one second (FEV1), and peak expiratory flow rate. It may also be classified as atopic or non-atopic, where atopy refers to a predisposition toward developing a type 1 hypersensitivity reaction.

There is no cure for asthma. Symptoms can be prevented by avoiding triggers, such as allergens and irritants, and by the use of inhaled corticosteroids. Long-acting beta agonists (LABA) or antileukotriene agents may be used in addition to inhaled corticosteroids if asthma symptoms remain uncontrolled. Treatment of rapidly worsening symptoms is usually with an inhaled short-acting beta-2 agonist such as salbutamol and corticosteroids taken by mouth. In very severe cases, intravenous corticosteroids, magnesium sulfate, and hospitalization may be required. In 2015, 358 million people globally had asthma, up from 183 million in 1990. It caused about 397,100 deaths in 2015, most of which occurred in the developing world. It often begins in childhood. The rates of asthma have increased significantly since the 1960s. Read more


Pollen Can Trigger 'Thunderstorm Asthma', Even if You Typically Don't Have Asthma   Science Alert - October 8, 2022

Climate change has caused melting icebergs, flooding, and landslides. It can also bring about an increase in pollen levels, prolong the duration of pollen season, and cause more pollen-related health problems. Pollen grains landing on the moist membranes of the nose or eyes cause "hay fever" (allergic rhinitis) in one in five people. This often leads to a runny or blocked nose and itchy eyes. During the pollen season, people with asthma are at greater risk of a flare-up. Pollen can also trigger thunderstorm asthma - occurring shortly after a thunderstorm - even in those who haven't been diagnosed with asthma and hay fever.