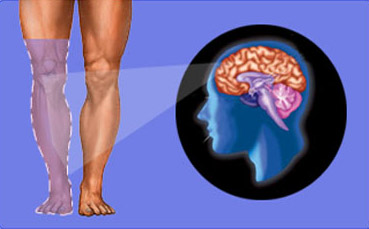 A phantom limb is the sensation that an amputated or missing limb (even an organ, like the appendix) is still attached to the body and is moving appropriately with other body parts. Approximately 60 to 80% of individuals with an amputation experience phantom sensations in their amputated limb, and the majority of the sensations are painful.

Phantom sensations may also occur after the removal of body parts other than the limbs, e.g. after amputation of the breast, extraction of a tooth (phantom tooth pain) or removal of an eye (phantom eye syndrome). The missing limb often feels shorter and may feel as if it is in a distorted and painful position. Occasionally, the pain can be made worse by stress, anxiety, and weather changes. Phantom limb pain is usually intermittent. The frequency and intensity of attacks usually declines with time.

Although not all phantom limbs are painful, patients will sometimes feel as if they are gesturing, feel itches, twitch, or even try to pick things up. For example, Ramachandran and Blakeslee describe that some people's representations of their limbs do not actually match what they should be, for example, one patient reported that her phantom arm was about "6 inches too short".

A slightly different sensation known as phantom pain can also occur in people who are born without limbs and people who are paralyzed. Phantom pains occur when nerves that would normally innervate the missing limb cause pain. It is often described as a burning or similarly strange sensation and can be extremely agonizing for some people, but the exact sensation differs widely for individuals. Other induced sensations include warmth, cold, itching, squeezing, tightness, and tingling.


Even Non-Amputees Can Feel a Phantom Limb   Live Science - April 12, 2013
Phantom limbs occur in 95 percent of amputees who lose an arm or leg. There are more kinds of phantoms than just limbs - people have reported phantom nipples, phantom appendix pains, phantom menstrual cramps after hysterectomies, and even phantom erections from phantom penises. People also say they feel phantom sensations of wristwatches or rings worn on the missing arms.