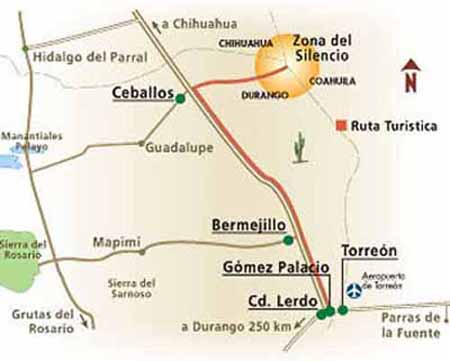 The Mapimĺ Silent Zone (La Zona Del Silencio) is a popular name for a desert patch near the Bolson de Mapimi in Mexico. The area is located between the states of Durango, Chihuahua, and Coahuila between parallels 26 and 28 in a place known as Trino Vertex. 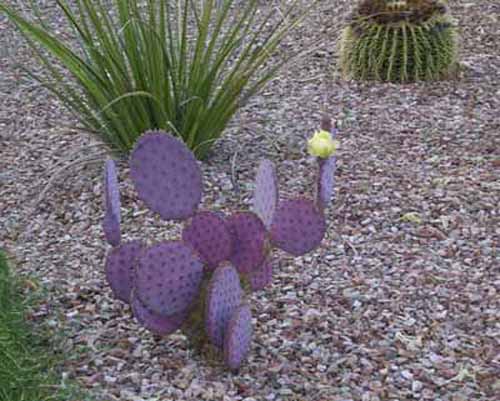 endemic version of the desert tortoise and the purple cactus. 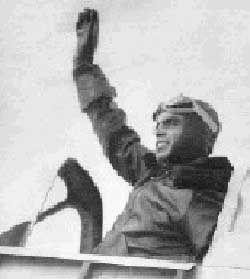 The Zone of Silence was first identified in the 1930's by pilot, Francisco Sarabia when he claimed his radio stopped working and the plane's instruments went wild while flying over the area in northern Mexico. It was later deduced that radio waves cannot be transmitted in and above the area due to local magnetic fields.

In 1970 a faulty American Athena missile fired from the White Sands Missile Base in nearby New Mexico went off course inexplicably and crashed into the mysterious desert region and made the world aware of the unique and apparently unusual properties of the area. Subsequently a team of U.S. Air Force investigators, with Mexican government approval, journeyed to the crash site and made an unexpected discovery. Within an unspecified and sometimes shifting area within the Zone, radio signals fail to travel through the air, creating a type of dark zone. No television, radio, short wave, microwave, or satellite signals seem to penetrate this zone. The name, Zone of Silence, was quickly adopted, and researchers began flocking to the remote location shortly thereafter.

The Mexican government has since constructed a research complex in the Zone of Silence, a place the scientists assigned there call the biosphere. The primary purpose of the research facility is to study the plant and animal life of the unusual region. But rumors have it that a lot more research is going on there than meets the eye - if there were any eyes in this remote part of the world to see it.

Research has show that there may be some natural anomaly associated with the region. High levels of magnetite have been discovered there, and scientist have also found that the area is a hot bed for meteorite activity, raising speculation that there may be some unusual magnetic properties associated with the minerals in the chalky soil. Researchers have been trying to determine whether magnetic ore is naturally occurring or is the product of contamination from thousands or millions of years of meteorite bombardment. And if the high-magnetic properties are a result of natural causes, this could be the reason that so many iron-rich objects from space find their way to this remote spot on Earth.

Theorists are quick to point out that the Zone of Silence is geographically located just north of the Tropic of Cancer and shares the same latitude south of the 30th parallel as the Egyptian Pyramids, the sacred cities of Tibet, and the Bermuda Triangle, a fact scientist point out is probably a simple coincidence. In fact, scientists at the Mexican research center have dubbed the region the Sea of Thetys because millions of years ago the area lay at the bottom of an ocean.

Some believe the area is a magnetic grid point or portal where earth energy is concentrated. This energy is linked to UFO activity and ancient astronaut theory, some believing aliens still return to these highly magnetic areas, either by ship or through wormholes. No reliably-documented evidence exists to support any of these claims, though UFO sightings are common in Mexico. Strange lights, floating orbs, burning bushes, flying saucers, and alien encounters have all been reported with a degree of abundance in the area. Ranchers report the night sky is often filled with mysterious lights, and floating aircraft that allegedly landed vertically in the desert, often causing brush to ignite and catch fire.

There have been reports of encounters with strange humanoid creatures. One ranch family claims they are regularly visited by a trio of blonde, long haired humanoids, two males and a female, that speak perfect Spanish. As the story goes, the visitors only ask for water, never for food or other provision. And when asked once by the rancher where they came from, they reportedly answered "from above".

A visiting researcher who became lost in the desert, reported that he was directed back to his research center by a similar trio of blonde strange looking people. Another story has it that a TV news investigation crew was aided by strange beings in the desert after being stuck in the road after an unusual cloud burst. These beings reportedly wore long raincoats and ball caps, something, admittedly, you don't often see in the desert wilderness.

How much about the unusual region in northern Mexico is true and how much is the product of human imagination, how much fact and how much fiction, no one can say for sure. But there is little question that there does exist some natural phenomena that appears to evade logical explanation. What the cause and effect may be - science, or science fiction - or a bit of both, remains to be proven.