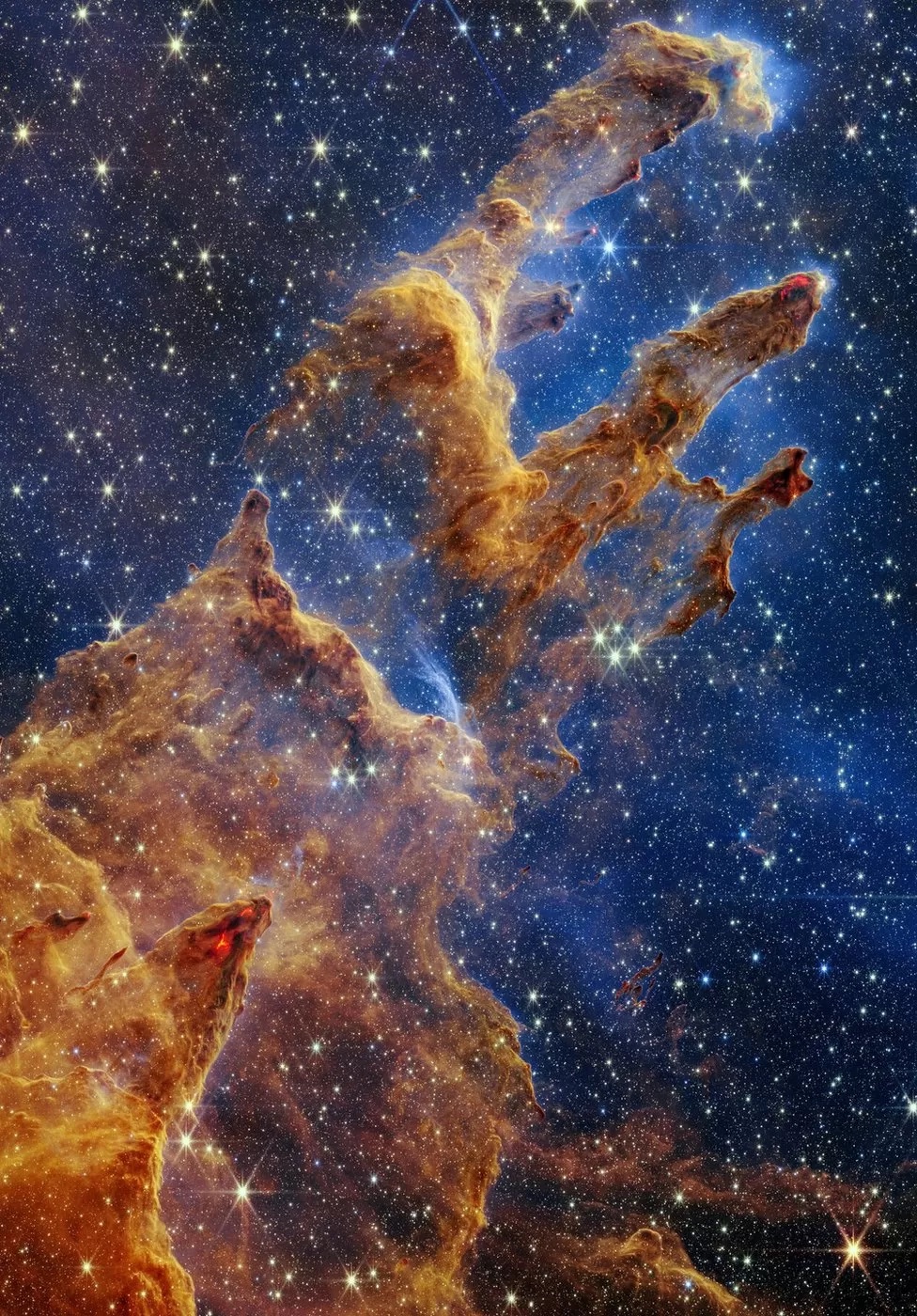 
Stars are formed inside these towering mountains of gas and dust. It's all part of the Eagle Nebula one of the most productive star factories in the Milky Way Galaxy. 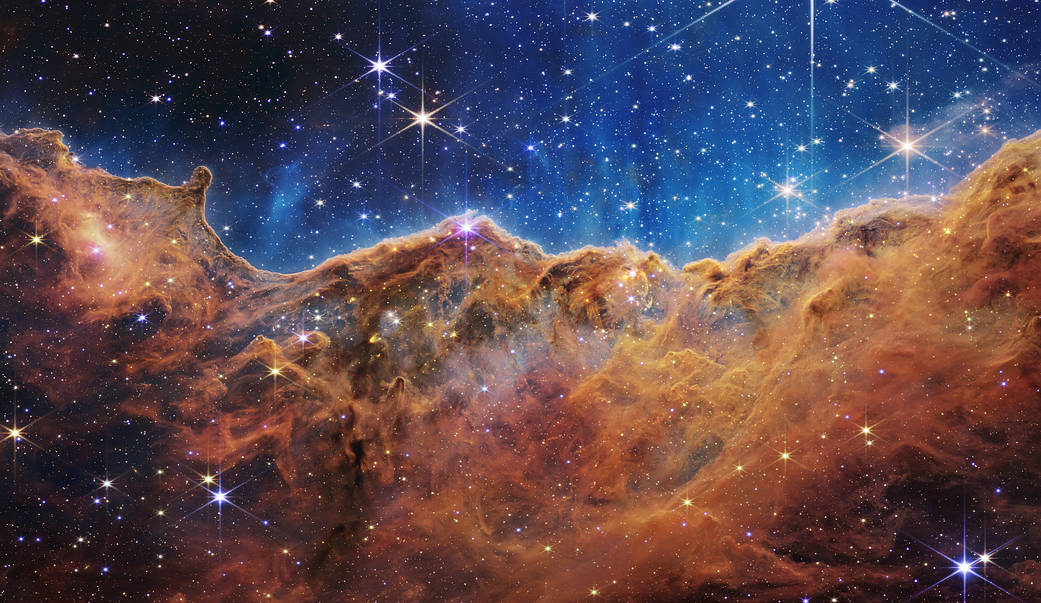 The Carina Nebula was a classic target of the Hubble telescope - Webb's predecessor - although in this Webb version we get a very different rendering. Carina is one of the largest and brightest nebulae in the sky, located roughly 7,600 light-years from Earth. Nebulae are stellar nurseries. They are a massive clouds of gas and dust in which new stars are forming. Except in this Webb image, we not only see the stars - our eyes are drawn to all that gas and the dust. Astronomers refer here to a "cosmic reef", or "cosmic cliff" - a kind of broad demarcation between dust in the bottom half, and then gas in the top half. One of Webb's key scientific goals is to study how stars form, and Carina is an excellent place to do that. 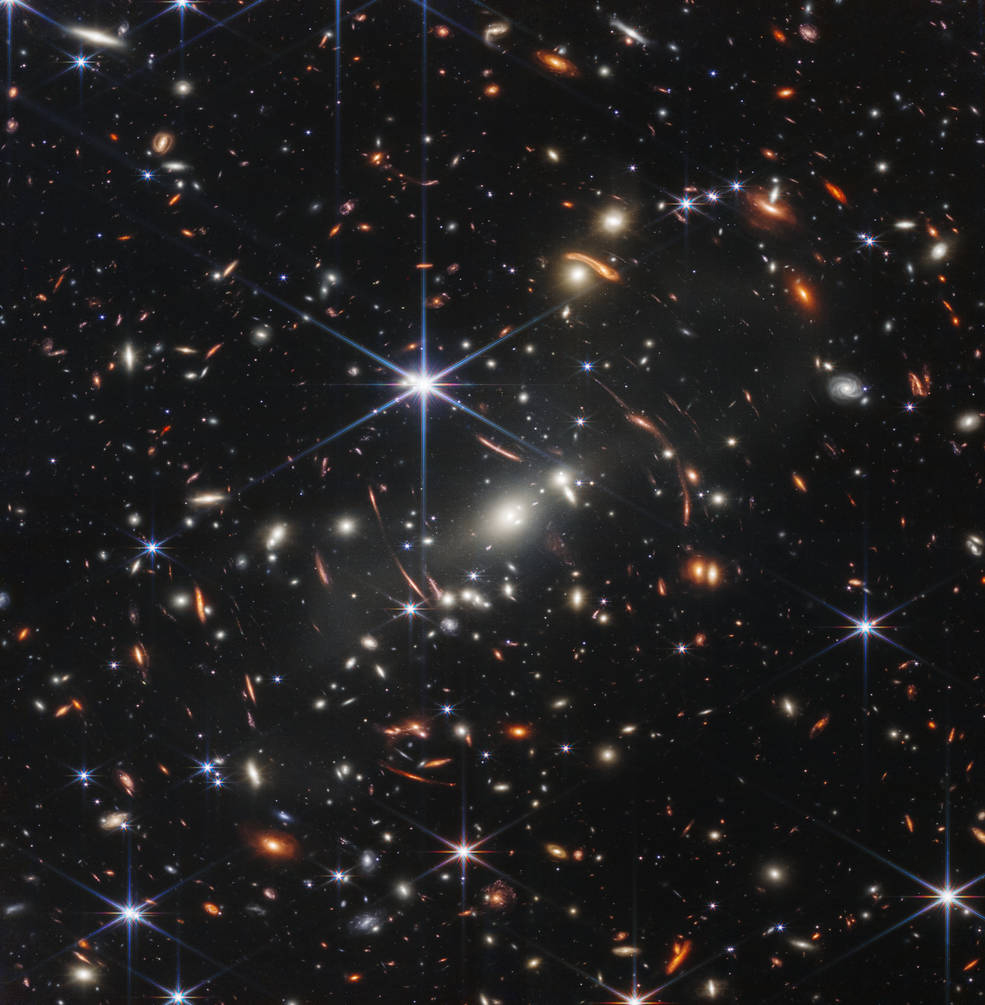 SMACS 0723 is a huge cluster of galaxies. It's known to astronomers as a "gravitational lens" because the mass of the cluster bends and magnifies the light of objects that are much further away. Everywhere you see a red arc-like structure - that's something - a galaxy - way off in the distance and far further back in time. The light in some of those arcs has taken over 13 billion years to reach us. And here's the slightly bizarre thing - some of those arcs on either side of the image are actually the same object. Their light has been bent through SMACS 0723 on more than one path.

The Southern Ring, or "Eight-Burst" nebula, is a giant expanding sphere of gas and dust that's been lit up by a dying star in the centre. As stars age, they change the way they make energy and eject their outer layers. And then, when the star gets very hot again, it energizes all that material it had previously spurned. The Southern Ring is nearly half a light-year in diameter and is located about 2,000 light-years from Earth. This type of structure is called a "planetary nebula", but it actually has nothing to do with planets. It's a misnomer from the early days of telescopes when they didn't have anything like the resolution they have today. Just as Webb wants to see how stars are born, it wants to see how they die, also. 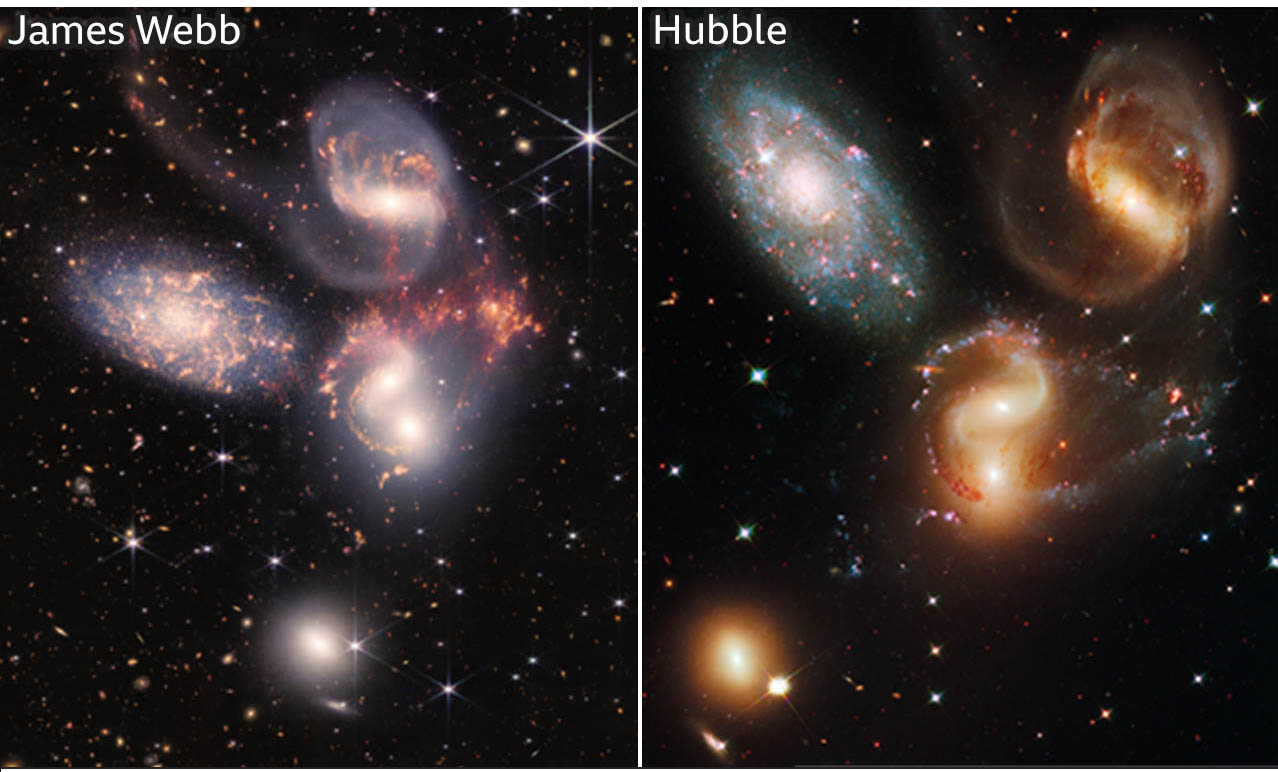 About 290 million light-years away, Stephan's Quintet is located in the constellation Pegasus. It's notable for being the first compact galaxy group ever discovered. Four of the five galaxies within the quintet are locked in a cosmic dance of repeated close encounters. This Webb image doesn't look that different from the Hubble version at first glance, but the new telescope's infrared sensitivity will pull out different features for astronomers to study. And this was the great hope - that we would have Webb working alongside Hubble. They have different strengths and being able to compare and contrast will give scientists a new dimension to their studies. We don't know for how much longer Hubble will operate. It's 32 years old and prone to technical glitches. But the officials at Nasa who are in charge of the old warhorse have just submitted a five-year budget plan. Keep your fingers crossed. 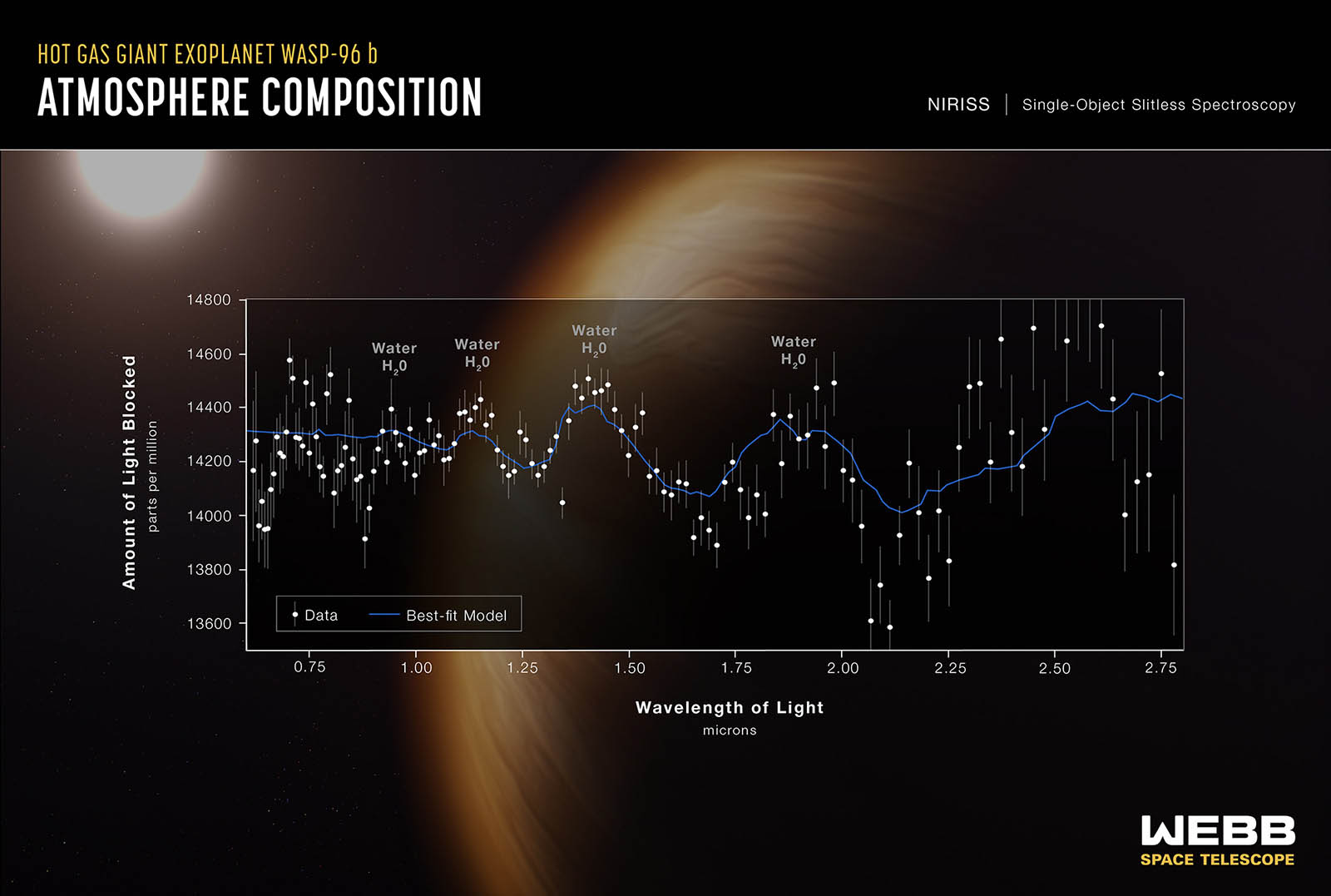 The giant planet WASP-96b, is located about 1,150 light-years from Earth. This mostly gaseous planet measures about half the mass of Jupiter, but orbits so closely to its home star that one year on the planet lasts the equivalent of just 3.4 Earth days. That quick orbital period is important, because it allows astronomers to easily study how light from the planet's home star is absorbed and reemitted by molecules in the planet's atmosphere. By breaking this spectrum of light down into its component wavelengths, scientists can discern the type and quantity of elements in the planet's atmosphere. This image reveals, for example, that there is a good deal of water vapor in WASP-96b's atmosphere. Blazing hot, is unlikely to harbor life. However, astronomers plan to take spectrum images of many other planets beyond our solar system, advancing the hunt for life beyond our solar system. 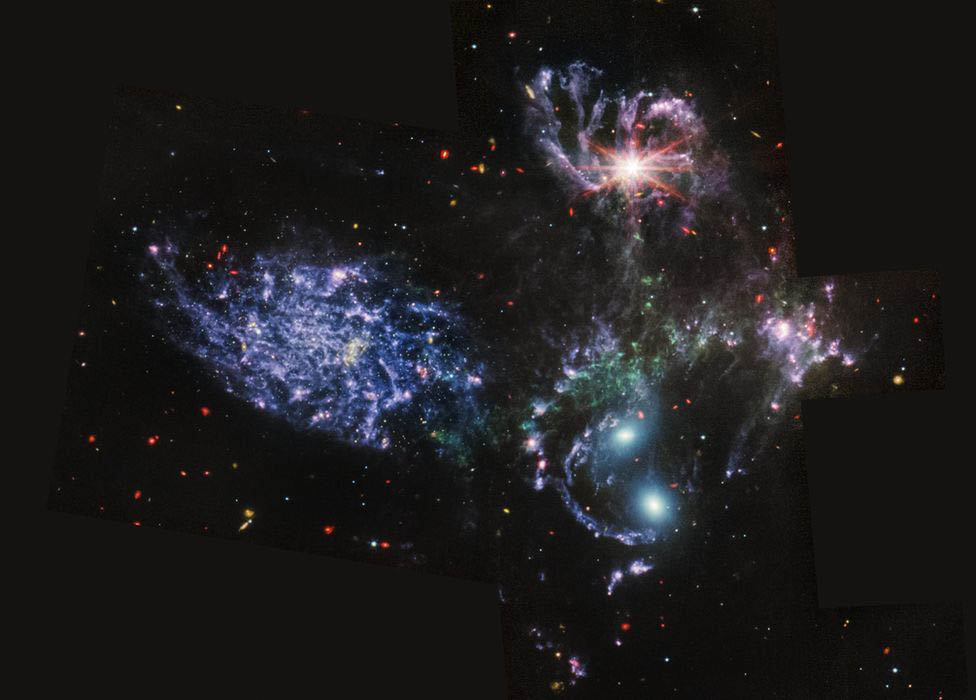 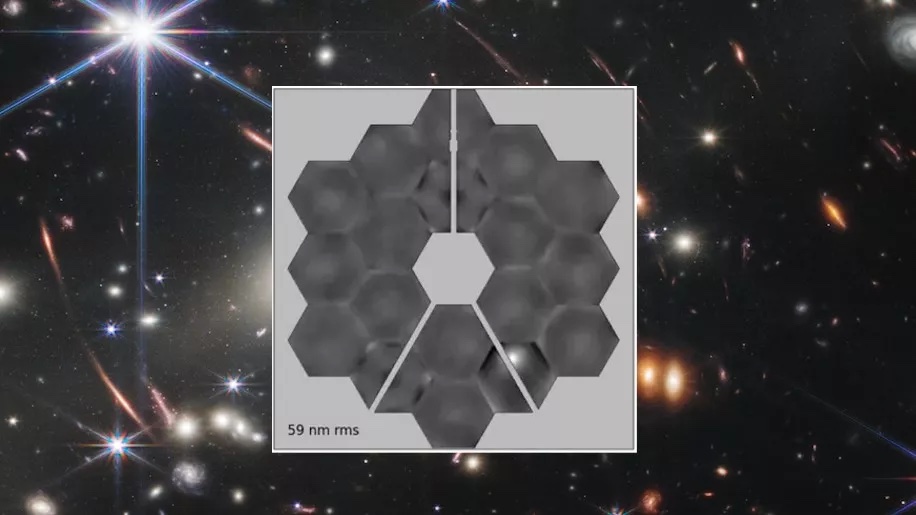 Since launching on Dec. 25, 2021, NASA's James Webb Space Telescope (JWST) has been pelted by at least 19 tiny space rocks - including one large one that left noticeable damage on one of the telescope's 18 gold-plated mirrors. In a sprawling new status report posted to the pre-print database arXiv.org (opens in new tab), NASA researchers have shared the first images showing the extent of that damage. Seen on the C3 mirror in the lower right-hand corner of the image, the impact site appears as a single bright white dent besmirching the golden mirror's surface. 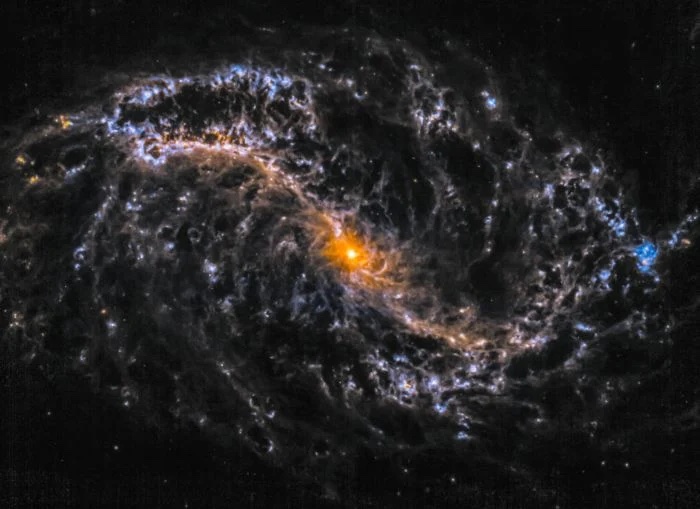 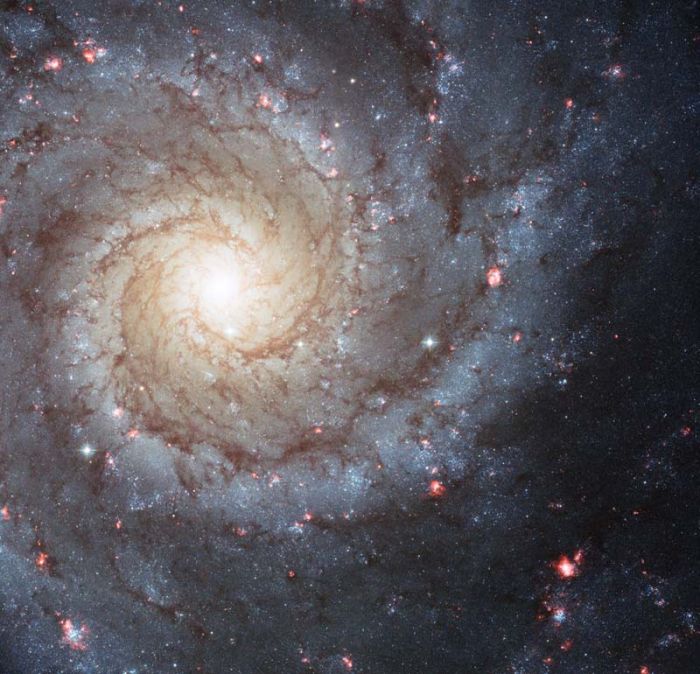 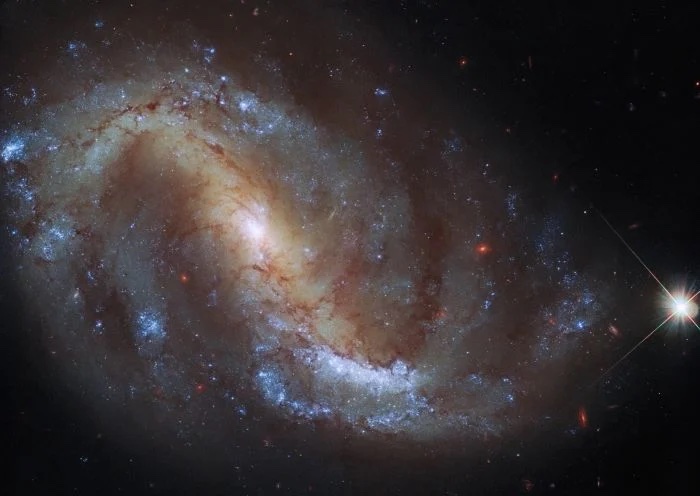 The first is NGC 628, also known as the Phantom Galaxy. The other is NGC 7496. Both are relatively close to the Milky Way, and both are the subject of ongoing observations as part of the Physics at High Angular resolution in Nearby GalaxieS (PHANGS) survey, to better chart the connections between young stars and the clouds of cold molecular gas that give birth to them. 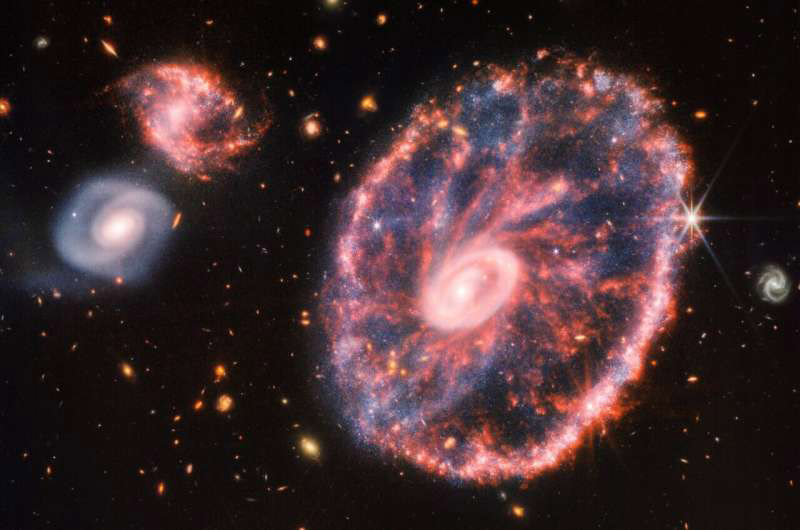 The James Webb Space Telescope has peered through time and huge amounts of dust to capture a new image of the Cartwheel Galaxy, revealing the spinning ring of color in unprecedented clarity. Located around 500 million light-years from Earth in the constellation Sculptor, the Cartwheel gained its shape during a spectacular head-on collision between two galaxies. 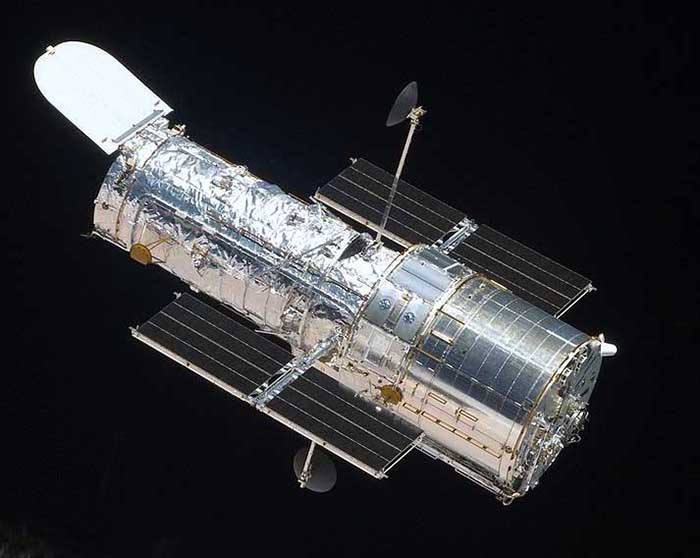 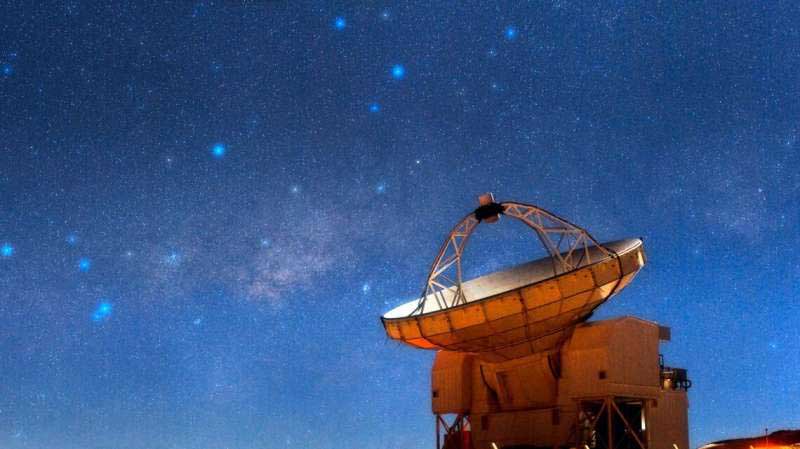 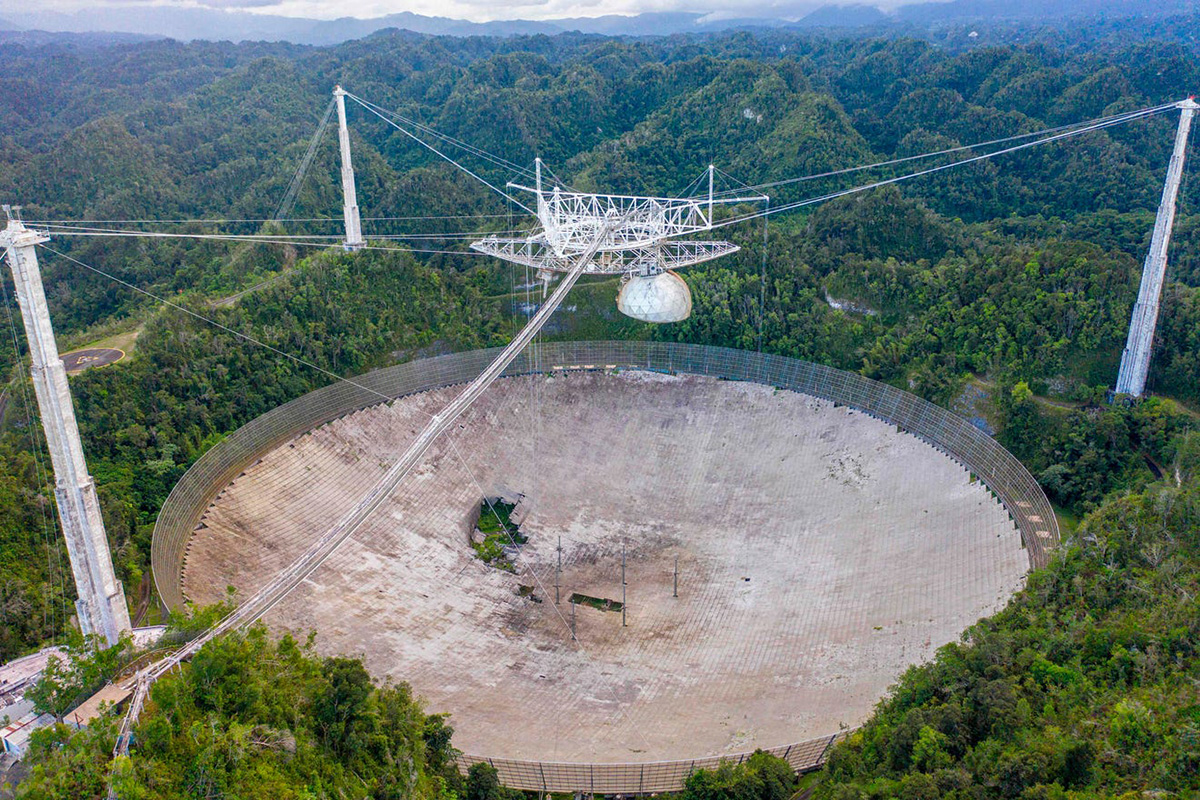 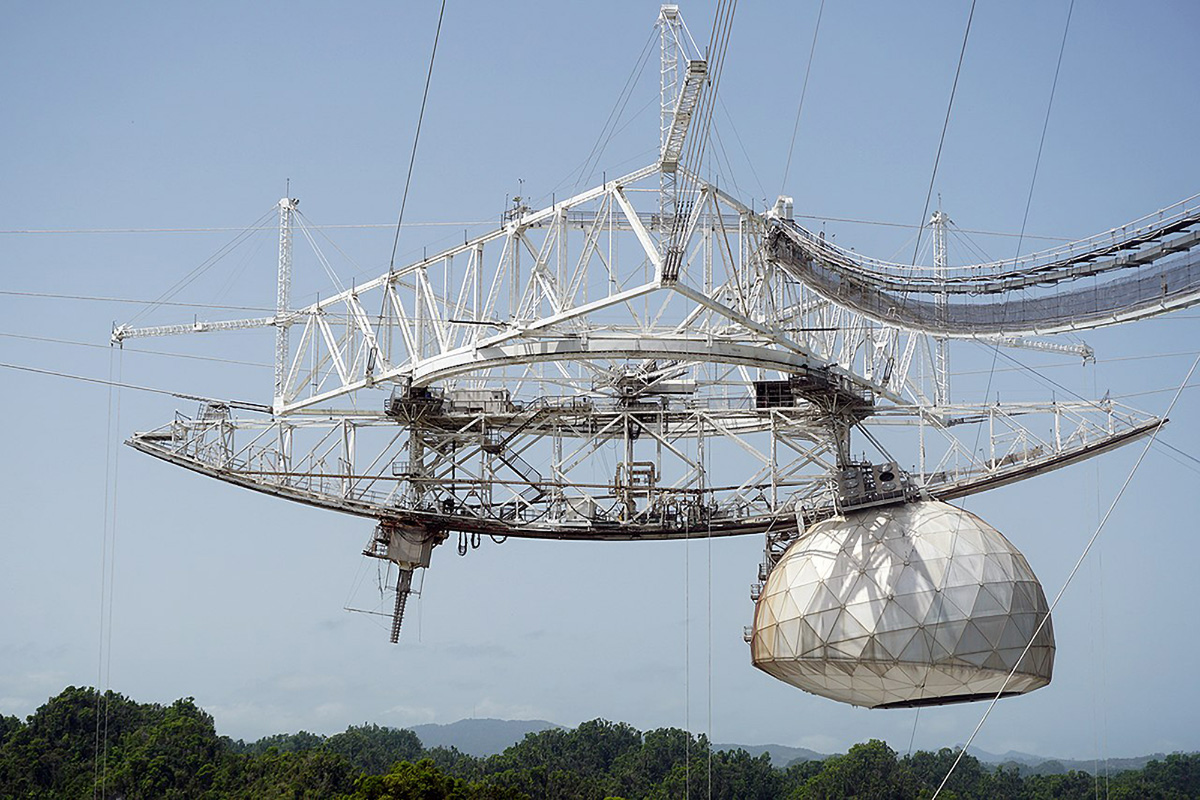 The telescope was damaged by Hurricane Maria in 2017 and was affected by earthquakes in 2019 and 2020. Two cable breaks, one in August 2020 and a second in November 2020, threatened the structural integrity of the support structure for the suspended platform and damaged the dish. Due to uncertainty over the remaining strength of the other cables supporting the suspended structure, and the risk of collapse due to further failures making repairs dangerous, the NSF announced on November 19, 2020, that it would decommission and dismantle the telescope, with the radio telescope and LIDAR facility remaining operational.

The Arecibo message is an interstellar radio message carrying basic information about humanity and Earth that was sent to globular star cluster M13 in 1974. It was meant as a demonstration of human technological achievement, rather than a real attempt to enter into a conversation with extraterrestrials.

The message was broadcast into space a single time via frequency modulated radio waves at a ceremony to mark the remodeling of the Arecibo radio telescope in Puerto Rico on 16 November 1974. The message was aimed at the current location of M13, about 25,000 light years from Earth, because M13 was a large and relatively close collection of stars that was available in the sky at the time and place of the ceremony. When correctly translated into graphics, characters, and spaces, the 1,679 bits of data contained within the message form the image shown here. 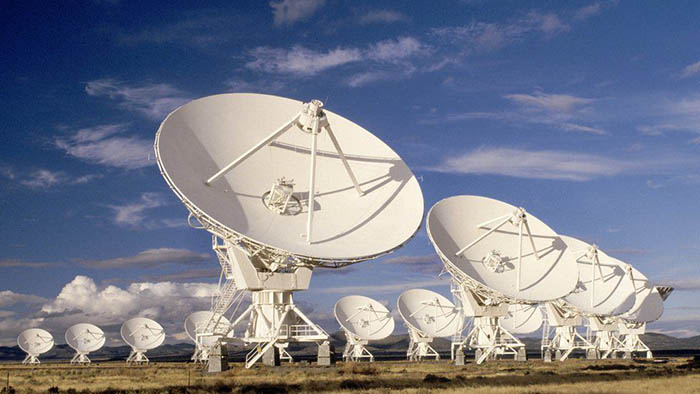 
Man has always looked to the skies for answers ... as if a celestial blueprint that tells the story of humanity's journey in time and space. Creation myths connect gods with the heavens, often the constellations, sometimes with a link to ancient aliens who came to Earth to seed humanity and will one day return. As the millennia progressed, so too did the use of telescopes to find answers to many of these age-old questions. That quest continues today with new and more advanced technologies as we venture into space. One has to wonder ... have any of the advanced telescopes ever captured the image of a UFO. 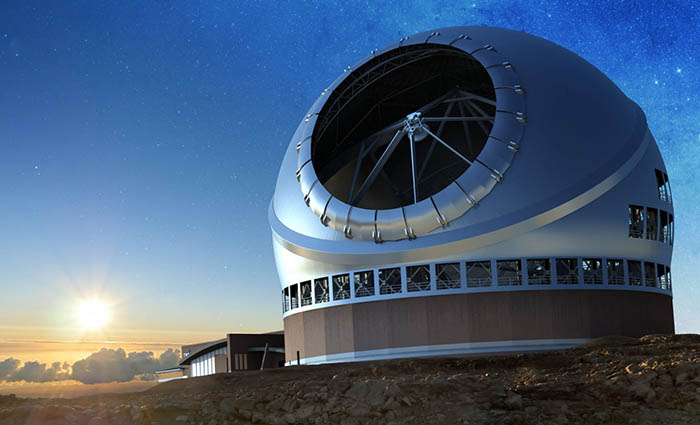 A telescope is an instrument that aids in the observation of remote objects by collecting electromagnetic radiation (such as visible light). The first known practical telescopes were invented in the Netherlands at the beginning of the 17th century, using glass lenses. They found use in terrestrial applications and astronomy.

The word "telescope" was coined in 1611 by the Greek mathematician Giovanni Demisiani for one of Galileo Galilei's instruments presented at a banquet at the Accademia dei Lincei. In the Starry Messenger Galileo had used the term "perspicillum". Read more 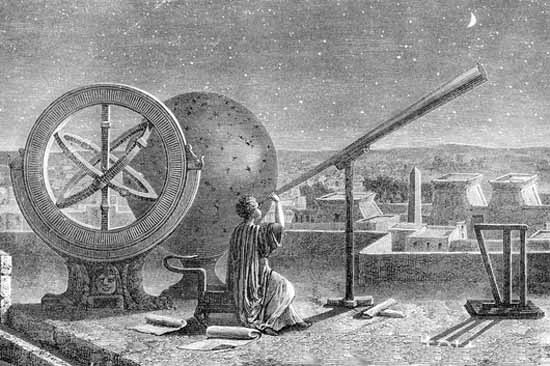 The earliest recorded working telescopes were the refracting telescopes that appeared in the Netherlands in 1608. Their development is credited to three individuals: Hans Lippershey and Zacharias Janssen, who were spectacle makers in Middelburg, and Jacob Metius of Alkmaar. Galileo heard about the Dutch telescope in June 1609, built his own within a month, and greatly improved upon the design in the following year. 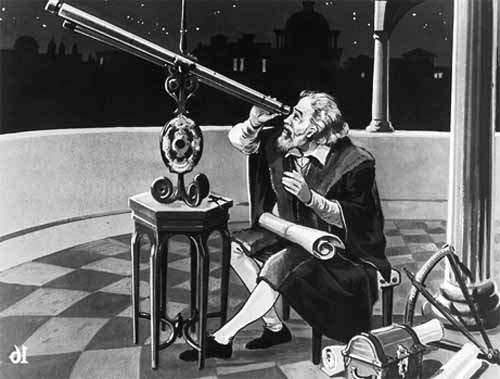 The idea that the objective, or light-gathering element, could be a mirror instead of a lens was being investigated soon after the invention of the refracting telescope. The potential advantages of using parabolic mirrors - reduction of spherical aberration and no chromatic aberration - led to many proposed designs and several attempts to build reflecting telescopes. In 1668, Isaac Newton built the first practical reflecting telescope, of a design which now bears his name, the Newtonian reflector.

The invention of the achromatic lens in 1733 partially corrected color aberrations present in the simple lens and enabled the construction of shorter, more functional refracting telescopes. Reflecting telescopes, though not limited by the color problems seen in refractors, were hampered by the use of fast tarnishing speculum metal mirrors employed during the 18th and early 19th century a problem alleviated by the introduction of silver coated glass mirrors in 1857, and aluminized mirrors in 1932. The maximum physical size limit for refracting telescopes is about 1 meter (40 inches), dictating that the vast majority of large optical researching telescopes built since the turn of the 20th century have been reflectors. The largest reflecting telescopes currently have objectives larger than 10 m (33 feet).

The 20th century also saw the development of telescopes that worked in a wide range of wavelengths from radio to gamma-rays. The first purpose built radio telescope went into operation in 1937. Since then, a tremendous variety of complex astronomical instruments have been developed. Telescopes