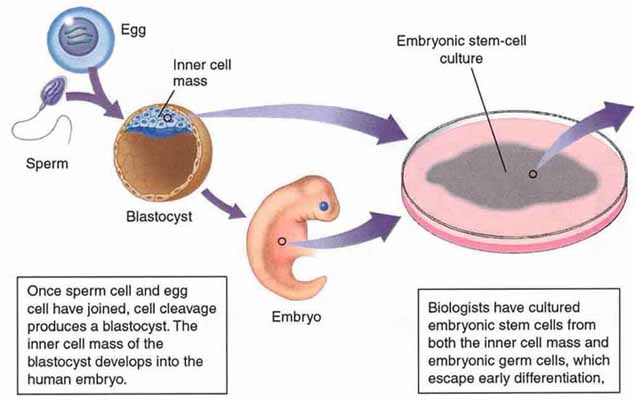 In multicellular organisms, stem cells are undifferentiated or partially differentiated cells that can differentiate into various types of cells and proliferate indefinitely to produce more of the same stem cell. They are the earliest type of cell in a cell lineage.

They are found in both embryonic and adult organisms, but they have slightly different properties in each. They are usually distinguished from progenitor cells, which cannot divide indefinitely, and precursor or blast cells, which are usually committed to differentiating into one cell type.

In mammals, roughly 50-150 cells make up the inner cell mass during the blastocyst stage of embryonic development, around days 5-14. These have stem-cell capability. In vivo, they eventually differentiate into all of the body's cell types (making them pluripotent). This process starts with the differentiation into the three germ layers - the ectoderm, mesoderm and endoderm - at the gastrulation stage. However, when they are isolated and cultured in vitro, they can be kept in the stem-cell stage and are known as embryonic stem cells (ESCs).

Adult stem cells are found in a few select locations in the body, known as niches, such as those in the bone marrow or gonads. They exist to replenish rapidly lost cell types and are multipotent or unipotent, meaning they only differentiate into a few cell types or one type of cell. In mammals, they include, among others, hematopoietic stem cells, which replenish blood and immune cells, basal cells, which maintain the skin epithelium, and mesenchymal stem cells, which maintain bone, cartilage, muscle and fat cells. Adult stem cells are a small minority of cells; they are vastly outnumbered by the progenitor cells and terminally differentiated cells that they differentiate into. Read More ...


Survey looks at why patients request stem cell treatments   Medical Express - July 19, 2022
Mayo Clinic researchers have analyzed a large group of patients to understand their motivations for seeking stem cell therapies and whether expectations are grounded in science.


Scientists Can Now Turn Stem Cells Into Bone Using Nothing More Than Sound   Science Alert - February 23, 2022
Stem cells have the superpower of turning into any other kind of cell - a superpower that some animals use to regrow limbs; for medicine, they yield the potential to help us repair parts of the human body that have been damaged by injury or disease. Carrying out those repairs requires the ability to manipulate stem cells on demand, and a new study outlines an innovative way of doing just that: by using high-frequency sound waves to turn stem cells into bone cells in as little as five days, with 10 minutes of stimulating treatment per day. Further down the line, the researchers hope this technique - which has several advantages over the processes that are in use today - could be used to regrow bone that has been lost to cancer or other types of degenerative disease.


Researchers discover new type of stem cell state   PhysOrg - June 11, 2018
John Bracht, American University biology assistant professor, and his students discovered a new type of cell state that could help ensure one always has the ability to generate healthy fat cells. The finding falls in line with increasing scientific discoveries elucidating how complex our cells are and how much we have yet to learn about their makeup. The discovery involves stem cells. Stem cells are usually thought of as replicating cells. Other cells perform specific functions. To turn into a specialized cell, a stem cell must be given instructions. As the team grew stem cells in the petri dish, they noticed some stem cells not following orders. They were curious. If the stem cells wouldn't turn into fat cells, then what did they become? Eventually, the team found that the rogue cells could differentiate and become fat cells.


Researchers uncover framework for how stem cells determine where to form replacement structures   PhysOrg - March 16, 2018
From previous work, the researchers knew that stem cells are likely reading out instructions from neighboring tissues to guide their path, and it became clear that the process faces some serious challenges in regeneration.


Amniotic fluid is a rich source of stem cells that can now be harvested   Science Daily - December 4, 2017
Amniotic fluid, the protective liquid surrounding an unborn baby, is discarded as medical waste during caesarean section deliveries. However, there is increasing evidence that this fluid is a source of valuable biological material, including stem cells with the potential for use in cell therapy and regenerative medicine. A team of scientists and clinicians has now developed a multi-step method, including a unique collection device and new cell harvesting and processing techniques, that enables term amniotic fluid to be safely harvested for large quantities of cells.


Paralyzed man regains use of arms and hands after experimental stem cell therapy   Science Daily - September 7, 2016
After receiving a stem cell injection into his spine, Kris Boesen, who was paralyzed from his neck to his toes after a car accident, is regaining movement in his extremities and hope for increased independence. The pioneering surgery is the latest example of how the emerging fields of neuro-restoration and regenerative medicine may have the potential to improve the lives of thousands of patients who have suffered a severe spinal cord injury.


New diaphragms grown from stem cells offer hope of a cure for common birth defect, possibly future repairs of the heart   Science Daily - December 1, 2015
New diaphragm tissue in rats has been successfully created in the lab using a mixture of stem cells and a 3D scaffold. When transplanted, it has regrown with the same complex mechanical properties of diaphragm muscle. The study offers hope of a cure for a common birth defect and possible future heart muscle repairs.


Stem cell exosomes used to induce damaged mouse hearts to self-repair   Science Daily - June 18, 2015
A little more than a decade ago, researchers discovered that all cells secrete tiny communications modules jammed with an entire work crew of messages for other cells. Today, a team of researchers is harnessing the communications vesicles excreted by stem cells and using them to induce the damaged heart to repair itself.