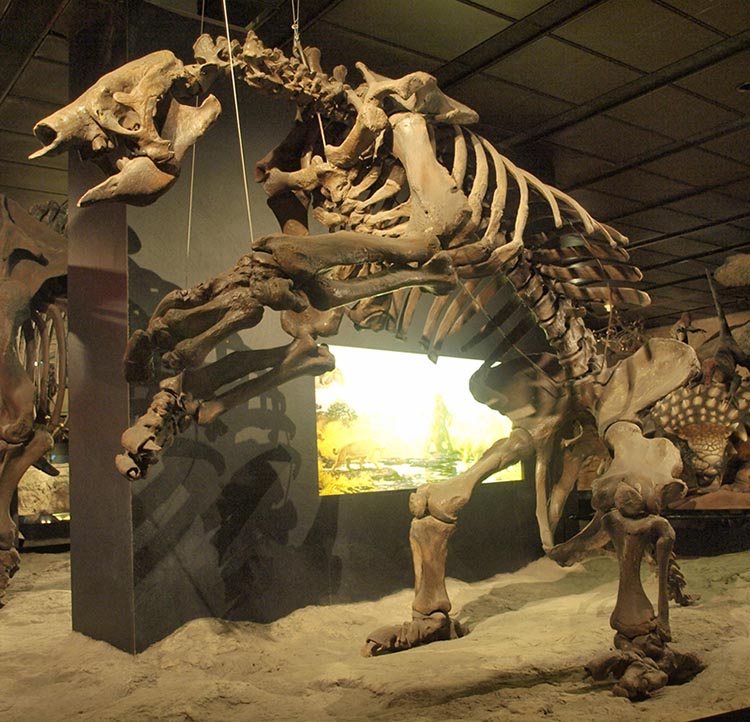 Sloths are medium-sized South American mammals belonging to the families Megalonychidae and Bradypodidae, part of the order Pilosa. Most scientists call these two families the Folivora suborder, while some call it Phyllophaga. Sloths are herbivores, eating very little other than leaves.

Sloths have made extraordinary adaptations to an arboreal browsing lifestyle. Leaves, their main food source, provide very little energy or nutrition and do not digest easily: sloths have very large, specialized, slow-acting stomachs with multiple compartments in which symbiotic bacteria break down the tough leaves. Sloths may also eat insects and small lizards and carrion.

As much as two-thirds of a well-fed sloth's body-weight consists of the contents of its stomach, and the digestive process can take as long as a month or more to complete. Even so, leaves provide little energy, and sloths deal with this by a range of economy measures: they have very low metabolic rates (less than half of that expected for a creature of their size), and maintain low body temperatures when active (30 to 34 degrees Celsius), and still lower temperatures when resting.

Until geologically recent times, large ground-dwelling sloths such as Megatherium lived in North America, but along with many other species they became extinct immediately after the arrival of humans on the continent.

Much evidence suggests that the extinction of the American megafauna, like that of Australia, far northern Asia, and New Zealand, resulted from human activity. However, simultaneous climate change that came with the end of the last Ice Age probably played a role as well.

10,000 years ago humans had reached the very southern tip of South America, where in present day Chilean Patagonia they shared a cavern with the giant sloth whose bones Charles Darwin discovered in the 1830's. The creatures portrayed there may have been giant sloth. 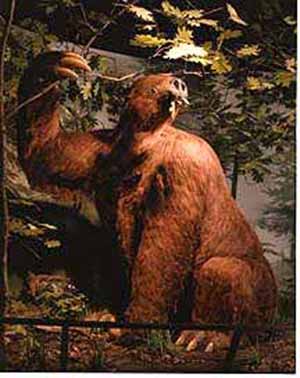 Seven thousand years later the giant sloth and most other large animal species in the Americas were extinct, but the first beginnings of complex human societies were taking shape, around 3000 BCE. Many of the large mammals (e.g., the mammoth, the saber-tooth tiger) that inhabited the Americas, some even after the end of the last ice age, became extinct, in an episode known as the late Pleistocene die off. Significant climatic change is most often cited as the reason but some anthropologists argue that the entrance of humans, first on to the North American plains east of the Canadian Rockies, then southward, could have had a dramatic impact, out of all proportions to their numbers, on the big animals at the top of the food chain. Only the small tree sloth survives today.

Ancient sloths liked meat and two veg! Giant 10ft-long creature that lived in South America 1.8 million years ago was an omnivore, unlike its strictly plant-eating relatives   Daily Mail - October 7, 2021
An extinct ground sloth that lived in South America up to 1.8 million years ago was not a strict vegetarian like most of its living relatives because it likely ate meat, a study has found. Researchers said the gigantic 10ft-long creature was an omnivore that at times consumed meat as well as plants. It had long been thought that Mylodon darwinii, also known as 'Darwin's ground sloth', was a herbivore because the majority of living sloths only eat leaves, fruit and twigs, although some occasionally snack on an insect or bird eggs.


Ancient tooth from an extinct 10-foot long sloth found in Belize reveals the creature's last days 27,000 years ago were spent thirsty   Daily Mail - February 28, 2019
The thirsty animal's 27,000 year old dentine was found submerged in a watery sinkhole, where it is believed to have taken its final drink.


Incredible Fossilized Footprints Suggest That Early Humans Stalked Giant Sloths   Live Science - April 25, 2018
A bigfoot-like ground sloth had unwelcome company about 11,000 years ago. No matter which way the giant creature went, ancient humans followed it, stepping in its elongated, kidney-shaped paw prints as they tracked the furry beast, a new study suggests. Finally, it seems that the giant ground sloth couldn't take it anymore. It reared up on its hind legs - likely standing as tall as 7 feet (2.1 meters) - and swung its sharp, sickle-shaped claws around, looking at the unwanted human interlopers, according to an analysis of the fossilized foot, paw and claw marks left at the site. What happened next remains a mystery. It's possible the humans attempted to kill the sloth and may have succeeded,


Ancient species of giant sloth discovered in Mexico   PhysOrg - August 18, 2017
The Pleistocene-era remains were found in 2010, but were so deep inside the water-filled sinkhole that researchers were only gradually able to piece together what they were. Scientists have so far hauled up the skull, jawbone, and a mixed bag of vertebrae, ribs claws and other bones, but the rest of the skeleton remains some 50 meters (165 feet) under water. Researchers are planning to bring up the rest by next year to continue studying the find - including to estimate how big the animal was.


LA train tunnel diggers find fossilized hip bone of giant 1,500 pound sloth that roamed the area 11,000 years ago   Daily Mail - June 3, 2017
Crews digging a tunnel for a new Los Angeles train line have found the remains of an ancient giant sloth. The Metropolitan Transportation Authority says a fossilized hip joint was discovered on May 16 in a layer of sandy clay 16 feet below a major thoroughfare where the new rail line is being built. The bone is from a Harlan's ground sloth, a mammal that roamed the Los Angeles basin 11,000 years ago.


Ancient giant sloth bones suggest humans were in Americas far earlier than thought   PhysOrg - November 20, 2013
A team of Uruguayan researchers working in Uruguay has found evidence in ancient sloth bones that suggests humans were in the area as far back as 30,000 years ago. Most scientists today believe that humans populated the Americas approximately 16,000 years ago, and did so by walking across the Bering Strait, which would have been frozen over during that time period. More recent evidence has begun to suggest that humans were living in South America far earlier than that - just last month a team of excavators in Brazil discovered cave paintings and ceramics that have been dated to 30,000 years ago and now, in this new effort, the research team has found more evidence of people living in Uruguay around the same time. 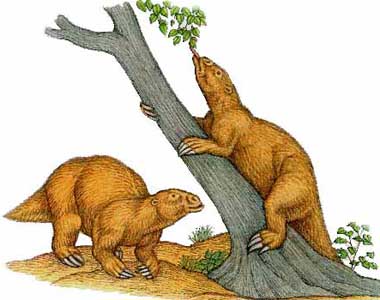 Bones of a newly discovered ground sloth that is the oldest of its kind ever found in North America have been uncovered by a University of Florida research team. Weighing more than five tons and able to reach as high as 17 feet, the 2.2 million-year-old prehistoric creature was larger than today's African bull elephants, said UF paleontologist David Webb. "This is a great, wonderful animal unlike anything in existence whose huge size is almost reminiscent of the dinosaurs," Webb said.

Eremotherium eomigrans, as named in a recent academic journal article, was the earliest of the giant sloths known as megatheres to have migrated from South America north across the Panamanian Land Bridge, Webb said. Before the Ice Age, these slothful plant-eaters lumbered across the Florida peninsula like herds of elephants, using their fearsome claws to strip leaves from branches and entwine them in their long tongues, he said.

Unlike other large-bodied ground sloths, the new species had an extra claw, representing a surprisingly primitive stage of evolution, Webb said. While all other giant sloths had four fingers with only two or three claws, this one had five fingers, four of them with large claws, the biggest being nearly a foot long, he said."The existence of such sloths would have been expected at a much earlier time, and in South America, not Florida," he said.

This evolutionary pattern of a reduction in the number of fingers and claws over time continued into the present with its modern-day descendant, the much smaller three-toed sloth, which lives in the tropical forests of Central and South America, he said. A university geology student found the ground sloth bones in 1986 during a class field trip at the Haile limestone quarry west of Gainesville. Over the years, a dozen other ground sloths were found, some completely articulated skeletons, and were brought to UF's Florida Museum of Natural History.

In 1989, Webb invited two of the world's leading specialists on such animals to examine the bones. Castor Cartelle, a zoologist from the University of Belo Horizonte in Brazil, and Gerardo De Iuliis, a zoologist from the University of Toronto in Canada, studied the bones for a decade before concluding this was a new, huge find. The findings were published as a 20-page paper in the December issue of the Zoological Journal of the Linnean Society of London. The fossil deposit was unusual in that it was found in what was a quiet pond, which allowed for excellent preservation, Webb said. Most fossil collections in Florida are found in small sinkholes or in stream deposits, where the bones are stirred up, he said.

"To get every bone in a hand perfectly articulated in a stream deposit would be very rare," he said. "Because bones are usually scattered, you would probably never know for sure how many claws an animal had, as we were able to determine with this ground sloth." The bones of one of the largest, most complete individuals will be assembled at the Natural History Exhibit Hall in Livingston, Mont. Matt Smith, a professional fossil preparator, was in Gainesville last week to collect the bones and will mount the skeleton. He said visitors to nearby Yellowstone National Park can stop and see him work through a picture window. The skeleton is to be posed in an upright position, as if stripping branches from a tree, and the finished product will be returned to the UF museum in 18 months for display in UF's Powell Hall. Giant ground sloths also fascinated President Thomas Jefferson, an amateur palentologist who brought their bones to the White House. "My favorite piece of history is when he instructed Meriwether Lewis, of the Lewis and Clark expedition, to keep an eye out for ground sloths," Webb said. "He was hoping they would find some living in the Western range."