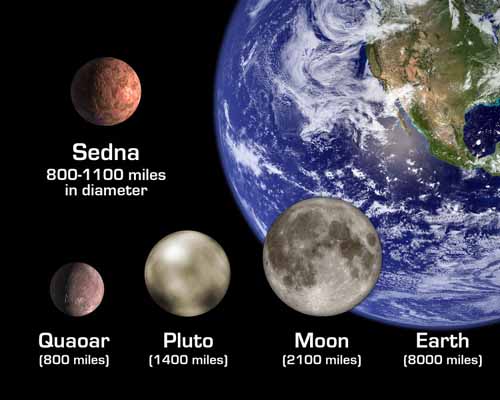 90377 Sedna is a large minor planet in the outer reaches of the Solar System that was, as of 2015, at a distance of about 86 astronomical units (AU) from the Sun, about three times as far as Neptune. Spectroscopy has revealed that Sedna's surface composition is similar to that of some other trans-Neptunian objects, being largely a mixture of water, methane, and nitrogen ices with tholins. Its surface is one of the reddest among Solar System objects. It is most likely a dwarf planet.

For most of its orbit, it is even farther from the Sun than at present, with its aphelion estimated at 937 AU (31 times Neptune's distance), making it one of the most distant-known objects in the Solar System other than long-period comets.

Sedna has an exceptionally long and elongated orbit, taking approximately 11,400 years to complete and a distant point of closest approach to the Sun at 76 AU. These facts have led to much speculation about its origin. The Minor Planet Center currently places Sedna in the scattered disc, a group of objects sent into highly elongated orbits by the gravitational influence of Neptune.

This classification has been contested because Sedna never comes close enough to Neptune to have been scattered by it, leading some astronomers to informally refer to it as the first known member of the inner Oort cloud. Others speculate that it might have been tugged into its current orbit by a passing star, perhaps one within the Sun's birth cluster (an open cluster), or even that it was captured from another star system. Another hypothesis suggests that its orbit may be evidence for a large planet beyond the orbit of Neptune.

Astronomer Michael E. Brown, co-discoverer of Sedna and the dwarf planets Eris, Haumea, and Makemake, thinks that it is the most scientifically important trans-Neptunian object found to date, because understanding its unusual orbit is likely to yield valuable information about the origin and early evolution of the Solar System Read more

In Inuit mythology, Sedna is a sea goddess and master of the animals, especially mammals such as seals, of the ocean. She lives in Adlivun, the Inuit underworld. Sedna is also known as Arnakuagsak or Arnarquagssaq (Greenland) and Nerrivik or Nuliajuk (Alaska). Although Sedna is sometimes thought to predominate throughout the Canadian Arctic she was known by other names by different Inuit groups. One example of this is Arnapkapfaaluk (big bad woman) of the Copper Inuit from the Coronation Gulf area.

Other tales assert that Sedna was a beautiful and chaste maiden who was innocently lured into marriage by an evil bird spirit. When her father tried to rescue her, the spirit became angry and caused a terrible storm which threatened the very survival of her people. In desperation, Sedna's father threw her into the raging sea. The varying legends each give different rationales for her death at the hands of her father. Sometimes she is the innocent victim, and sometimes she appears to deserve death as punishment for greed or some other evil. But all tales agree that she descended into the depths of the ocean and became the Goddess of Sea Creatures. As such she became a vital deity, eagerly worshipped by hunters who depended on her goodwill to supply food. Sedna is also the adversary on the children's cartoon Inuk which follows the story of a young Inuit boy. Her name was taken also to name a new disputed "tenth" planet, 90377 Sedna, as discovered by Michael Brown (Caltech), Chad Trujillo (Gemini Observatory) and David Rabinowitz (Yale University) on November 14, 2003.

There once lived an old widower, Anguta, and his daughter, Sedna, a woman so beautiful that all the Eskimo men sought to live with her. But she found none to her liking and refused all offers. One day, a seabird came to her and promised her a soft life in a warm hut full of bearskins and fish. Sedna flew away with him. The bird had lied. Sedna found her home a stinking nest. She sat, sadly regretting her rejection of the handsome human men. And that was what she told her father, when she listed her complaints when he visited her a year later.

Anguta, "man with something to cut", put his daughter in his kayak to bring her back to the human world. Perhaps he killed the bird husband first, perhaps he just stole the bird's wife, but in either case the vengeance of the bird people followed him. The rising sea threatened the escaping humans with death. On they struggled, until Anguta realized that flight was hopeless.

He shoved Sedna overboard to drown. Desperate for life, she grabbed the kayak with a fierce grip. Her father cut off her fingers. She flung her mutilated arms over the skin boat's sides. Anguta cut them off, shoving his oar into Sedna's eye before she sank into the icy water.

At the bottom of the sea, she lived thereafter as queen of the deep, mistress of death and life, "old food dish," who provided for the people. Her amputated fingers and arms became the fish and marine mammals, and she alone decided how many could be slaughtered for food. She was willing to provide for the people if they accepted her rules: for three days after their death, the souls of her animals would remain with their bodies, watching for violation of Sedna's demands. Then they returned to the goddess, bearing information about the conduct of her people. Should her laws be broken, Sedna's hand would begin to ache, and she would punish humans with sickness, starvation, and storms. Only if a shaman traveled to her country, Adlivun, and assuaged her pains would the sea mammals return to the hunters, which, if the people acted righteously, they did willingly.

In Adlivun in a huge house of stone and whale ribs, Sedna dragged along the ground with one leg bent beneath her. A horrible dog guarded her, said by some to be her husband. Anguta himself lived there too; some versions of the myth say that, hoping the seabirds would think Sedna dead, he allowed her back into the kayak and returned home.

But she hated him thereafter and cursed her dogs to eat his hands and feet; the earth opened and swallowed them. In any case, Anguta served Sedna by grabbing dead human souls with his maimed hand and bringing them home. These dead lived in a region near Sedna's home through which shamans had to pass to reach the goddess. There was also an abyss, in which an ice wheel turned slowly and perpetually; then a caldron full of boiling seals blocked the way; finally, the horrible dog stood before Sedna's door, guarding the knife-thin passageway to her home. Should the shaman pass all these dangers and ease Sedna's aching hands, the goddess permitted him to return, bearing the news that Old Woman had forgiven her people, that the seals would again seek the hunter, that the people would no longer starve.