In physics, magnetism is one of the phenomena by which materials exert attractive or repulsive forces on other materials. Some well-known materials that exhibit easily detectable magnetic properties (called magnets) are nickel, iron, cobalt, gadolinium and their alloys; however, all materials are influenced to greater or lesser degree by the presence of a magnetic field.

Magnetism also has other definitions/descriptions in physics, particularly as one of the two components of electromagnetic waves such as light.

Aristotle attributes the first of what could be called a scientific discussion on magnetism to Thales, who lived from about 625 BC to about 545 BC. Around the same time in ancient India, the Indian surgeon, Sushruta, was the first to make use of the magnet for surgical purposes.

In ancient China, the earliest literary reference to magnetism lies in a 4th century BC book called Book of the Devil Valley Master: "The lodestone makes iron come or it attracts it." The earliest mention of the attraction of a needle appears in a work composed between AD 20 and 100 (Louen-heng): "A lodestone attracts a needle."

The ancient Chinese scientist Shen Kuo (1031-1095) was the first person to write of the magnetic needle compass and that it improved the accuracy of navigation by employing the astronomical concept of true north (Dream Pool Essays, AD 1088 ), and by the 12th century the Chinese were known to use the lodestone compass for navigation.

In 1600, William Gilbert published his De Magnete, Magneticisque Corporibus, et de Magno Magnete Tellure (On the Magnet and Magnetic Bodies, and on the Great Magnet the Earth). In this work he describes many of his experiments with his model earth called the terrella. From his experiments, he concluded that the Earth was itself magnetic and that this was the reason compasses pointed north (previously, some believed that it was the pole star (Polaris) or a large magnetic island on the north pole that attracted the compass).

An understanding of the relationship between electricity and magnetism began in 1819 with work by Hans Christian Oersted, a professor at the University of Copenhagen, who discovered more or less by accident that an electric current could influence a compass needle. This landmark experiment is known as Oersted's Experiment. Several other experiments followed, with Andrˇ-Marie Amp¸re, Carl Friedrich Gauss, Michael Faraday, and others finding further links between magnetism and electricity. James Clerk Maxwell synthesized and expanded these insights into Maxwell's equations, unifying electricity, magnetism, and optics into the field of electromagnetism. In 1905, Einstein used these laws in motivating his theory of special relativity, requiring that the laws held true in all inertial reference frames.

Electromagnetism has continued to develop into the twentieth century, being incorporated into the more fundamental theories of gauge theory, quantum electrodynamics, electroweak theory, and finally the standard model. Read more ... 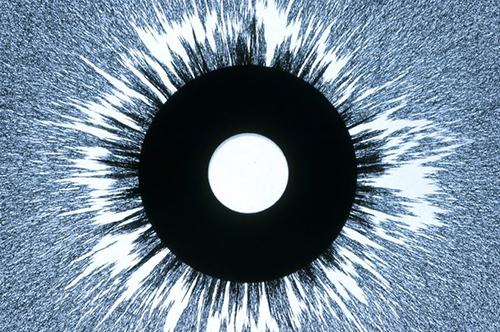 Scientists have discovered a brand-new kind of magnet hiding out in a uranium compound. The compound, USb2 (a compound of uranium and antimony), a so-called "singlet-based" magnet, is novel in that it generates magnetism in an entirely different way than any other magnet known to scientists. Electrons, which are negatively charged particles, generate their own tiny magnetic fields. These fields have a "north" and "south" pole, a consequence of a quantum mechanical property known as spin. In most objects, these magnetic fields point in random directions, canceling each other out. (This is why your body isn't a giant magnet.) But in certain materials, those fields become aligned. When that happens, they create a magnetic field powerful enough to, for example, move a bunch of iron filing around or cause a compass to point north.