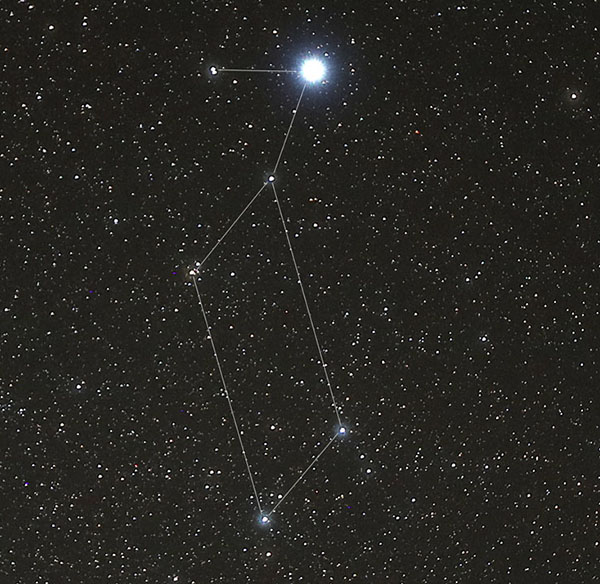 Lyra is a compact constellation named after the ancient Greek stringed instrument, the lyre, which resembled a U-shaped harp. For many night-sky watchers its rising heralds the arrival of the summer Milky Way. Vega is Lyra's most luminous star and the fourth brightest in the night sky. It's also an ideal place to begin our tour of the constellation's deep-sky and double-star treasures. Despite its small footprint you'll find a little bit of everything within the Lyre's borders.

On older skymaps Lyra ist represented as a bird: Vultur, the Vulture. Together with the Cygnus, the Swan, and Aquila, the Eagle, it is hunted by Hercules.

Another story says that Mercury invented the lyre by placing strings across the back of a tortoise shell. So sometimes in early descriptions this constellation is also drawn as a tortoise.

Lyra the 'Lyre' or 'Harp' is the instrument invented by Hermes (Mercury) and given to Apollo his half-brother, who in turn gave it to his son Orpheus, the musician of the Argonauts, and son of Apollo and the muse Calliope. Apollo gave his son the lyre as a gift, and Orpheus played it so well that even the wild beasts, the rocks, and the trees were charmed by his music. He fell deeply in love with the nymph Eurydice, and the two were married.

Their wedded bliss did not last for very long, however. Eurydice was wandering in the fields with some other nymphs when she was seen by the shepherd Aristaeus. Aristaeus was struck by her beauty and pursued her; as she fled, she was bitten by a snake in the grass and died of the serpent's poison.

Orpheus was devastated. He decided to seek out his wife in the underworld, and gained an audience with Pluto and Persephone. The king and queen of the underworld, like all others, were charmed by his music and granted him permission to take Eurydice back to the land of the living with him:

They called Eurydice. She was among the ghosts who had but newly come, and walked slowly because of her injury. Thracian Orpheus received her, but on condition that he must not look back until he had emerged from the valleys of Avernus or else the gift he had been given would be taken from him.

Up the sloping path, through the mute silence they made their way, up the steep dark track, wrapped in impenetrable gloom, till they had almost reached the surface of the earth. Here, anxious in case his wife's strength be failing and eager to see her, the lover looked behind him, and straightaway Eurydice slipped back into the depths.

Orpheus stretched out his arms, straining to clasp her and be clasped; but the hapless man touched nothing but yielding air. Eurydice, dying now a second time, uttered no complaint against her husband.

What was there to complain of, that she had been loved? With a last farewell which scarcely reached his ears, she fell back again into the same place from which she had come

According to Ovid, Orpheus was so morose that he rejected the company of the Thracian women in favor of the company of small boys. The women were infuriated and, when maddened by the rites of Bacchus, hurled rocks at the bard. The rocks, tamed by the sound of the lyre, fell harmlessly at his feet until the screams of the infuriated women drowned out the music.

The women dismembered Orpheus, throwing his lyre and his head into the river Hebrus. The Muses gathered up his limbs and buried them, and Orpheus went to the underworld to spend eternity with Eurydice. Jupiter himself cast the bard's lyre into the sky.

Lyra may be easily be seen because of Vega, at zero magnitude the second brightest star in the northern sky. Vega is also part of the summer triangle, formed with Deneb and Altair.

In Latin Lyra as often the alpha star or lucida takes on the name of the constellation. Flamsteed's had Testa fulgida dicta Lyra; Latin Fidis and Fides "lyre", "string" and Fidicula.

In Holland's translation of Pliny it is the 'Harp-Star'.