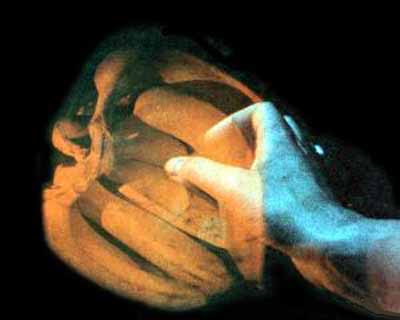 Holography is the science and practice of making holograms. Typically, a hologram is a photographic recording of a light field, rather than of an image formed by a lens, and it is used to display a fully three-dimensional image of the holographed subject, which is seen without the aid of special glasses or other intermediate optics.

The hologram itself is not an image and it is usually unintelligible when viewed under diffuse ambient light. It is an encoding of the light field as an interference pattern of seemingly random variations in the opacity, density, or surface profile of the photographic medium. When suitably lit, the interference pattern diffracts the light into a reproduction of the original light field and the objects that were in it appear to still be there, exhibiting visual depth cues such as parallax and perspective that change realistically with any change in the relative position of the observer. In its pure form, holography requires the use of laser light for illuminating the subject and for viewing the finished hologram. In a side-by-side comparison under optimal conditions, a holographic image is visually indistinguishable from the actual subject, if the hologram and the subject are lit just as they were at the time of recording.

A microscopic level of detail throughout the recorded volume of space can be reproduced. In common practice, however, major image quality compromises are made to eliminate the need for laser illumination when viewing the hologram, and sometimes, to the extent possible, also when making it. Holographic portraiture often resorts to a non-holographic intermediate imaging procedure, to avoid the hazardous high-powered pulsed lasers otherwise needed to optically "freeze" living subjects as perfectly as the extremely motion-intolerant holographic recording process requires. Holograms can now also be entirely computer-generated to show objects or scenes that never existed.

Holography is distinct from lenticular and other earlier autostereoscopic 3D display technologies, which can produce superficially similar results but are based on conventional lens imaging. Stage illusions such as Pepper's Ghost and other unusual, baffling, or seemingly magical images are also often incorrectly called holograms. Read more