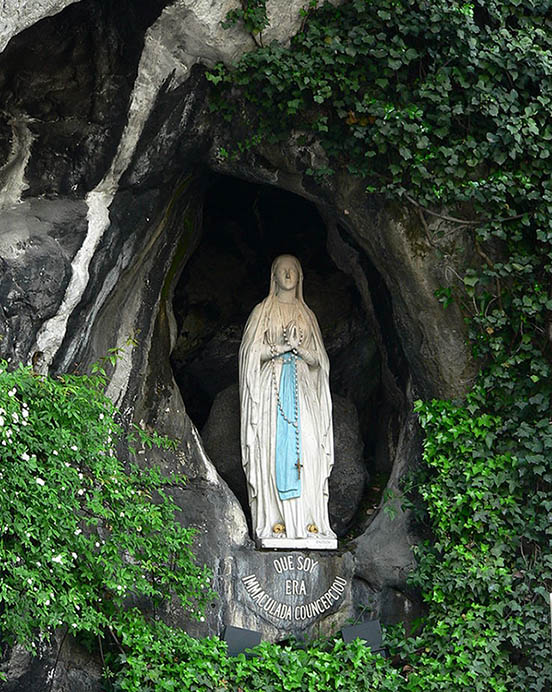 Lourdes (Lorda in Occitan) is a town in the Hautes-Pyrenees departement in France. It is the largest Catholic religion pilgrimage location in France. It is situated in the south of the country in the foothills of the Pyrenees mountains, and has about 17,000 inhabitants.

It is said that in February 1858 the Blessed Virgin Mary appeared to a 14-year-old girl called Bernadette Soubirous (now St. Bernadette) in the remote Grotto of Massabielle. A statue of the Madonna of Lourdes was erected at the site in 1864. Soon the previous chapel structure was replaced with a pilgrimage basilica. Bernadette Soubirous entered the Monastery of Nevers in 1866 and was canonized a Saint in 1933. 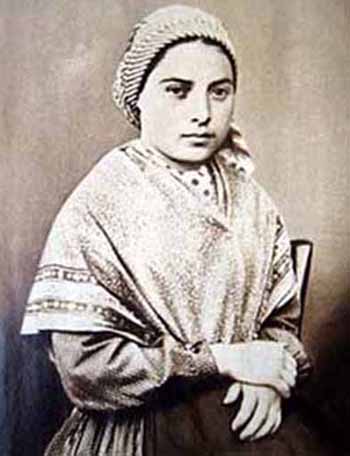 Bernadette Soubirous (January 7, 1844 - April 16, 1879) was a visionary from the town of Lourdes in southern France. Her visions made the town a major site for pilgrimages. In 1933 she was canonized as a saint by the Catholic Church.

Bernadette was the daughter of Francois Soubirous, a miller, and his wife Louise, a laundress. She was the eldest of six children. Hard times had fallen on rural France and the family lived in extreme poverty, relying on their love and support for one another and their religious devotion. All the family members sought what employment they could. Bernadette did farm work, notably sheep herding, for a family friend in nearby Bartres, and also waited tables in her Aunt Bernarde's tavern.

She returned to Lourdes in January 1858 to attend the free school run by the Sisters of Charity and Christian Instruction so she could finish learning the Catechism so as to receive her first Holy Communion.

Her difficulties in school were attributed at the time to simple-mindedness, and in later hagiographies used to illustrate her innocence; but since all classes were taught in classic French rather than the local dialect, which is closer to Basque, it is likely Bernadette was not the only student with learning problems.

On 11 February 1858, aged 14, while she was out gathering firewood with her sister and another friend at the grotto of Massabielle outside Lourdes, Bernadette saw the first of 18 visions of a lady who was later accepted by the Church as being the Blessed Virgin Mary.

The other girls saw nothing. The apparition did not identify herself until the 17th vision, and until then Bernadette called her simply 'Aquero' ('she' in the local dialect).

On the ninth vision, the lady told Bernadette to drink from the spring that flowed under the rock.

Although there was no known spring there, and the ground was hard and dry, Bernadette assumed the lady meant that the spring was underground. She did as she was told and dug into the dirt, and a spring appeared which continues flowing to this day. The water of the spring is claimed to have miraculous healing properties; in the 145 years since then, about 70 cures have been verified by the Lourdes Bureau as "inexplicable", but only after extremely rigorous scientific and medical examinations failed to find any other explanations.

The other content of Bernadette's visions was simple, and focused on the need for prayer and penance. However, at the thirteenth apparition on March 2nd, the lady said "Please go to the priests and tell them that a chapel is to be built here. Let processions come hither." Bernadette duly went to parish priest Father Dominique Peyramale with the request.

A brilliant but often roughspoken man with little belief in claims of visions and miracles, Peyramale told Bernadette that the lady must identify herself. Bernadette repeated this to the lady, but the lady bowed a little, smiled and said nothing.

Her sixteenth, which went for over an hour, was on March 25, 1858. During this vision, the second of two "miracles of the candle" occurred. Bernadette was holding a lighted candle; during the vision it burned down, and the flame was in direct contact with her skin for over 15 minutes but she showed no sign of experiencing any pain.

This was witnessed by many people present, including a doctor who timed it. Despite the flame, there was no sign that her skin was in any way affected, so the doctor monitored Bernadette closely but did not intervene.

After the vision ended, the doctor examined her hand but found no evidence of any burning, and she was completely unaware of what had been happening. The doctor then briefly applied a lighted candle to her hand and she reacted immediately.

Towards the end of this vision, Bernadette again asked the lady her name but she just smiled back. She repeated the question a further three times. The lady then said, in the local dialect, "I am the Immaculate Conception". Four years earlier, Pope Pius IX had promulgated the doctrine of the Immaculate Conception. This was that, alone of all human beings who have ever lived, Mary the mother of Jesus was born without the stain of original sin.

However this was not well known to Catholics at large at that time, being generally confined to discussion amongst the clergy. It certainly was not an expression known to a simple uneducated peasant girl who could barely even read, and her parents, teachers and priests all later testified that she had never previously heard the words 'immaculate conception' from them.

If Bernadette had heard of the idea at all (she did own a Miraculous Medal) she probably thought, as most people did and still do, that "conceived without sin" in the Medal's prayer referred to the Virgin Birth.Bernadette was a sickly child; she had had cholera in infancy and suffered most of her life from asthma, and some of the people who interviewed her following her revelation of the visions thought her simple-minded.

But despite being rigorously interviewed by officials of both the Catholic Church and the French government, she stuck consistently to her story. Her behavior during this period set the example by which all who claim visions and mystical experiences are now judged by Church authorities.

She spent the rest of her brief life there, working as an assistant in the infirmary and later as a sacristan, creating beautiful embroidery for altar cloths and vestments.

During a severe asthma attack, she asked for water from the Lourdes spring, and her symptoms subsided, never to return. However, she did not seek healing in this way when she later contracted tuberculosis of the bone in the right knee. She had followed the development of Lourdes as a pilgrimage shrine while she still lived at Lourdes, but was not present for the consecration of the basilica there in 1876.

She eventually died of her illness at the age of thirty-five on April 16, 1879.

Her body was first exhumed on September 2, 1909, in the presence of representatives appointed by the postulators of the cause, two doctors, and a sister of the community.

Although the crucifix in her hand and the rosary had both oxidized, her body was found to be "incorrupt" - preserved from decomposition, perhaps by supernatural means. This was one of the miracles cited for support of her canonization. Her body was washed and reclothed before burial in a new double casket.

The corpse was exhumed a second time on April 3, 1919. The body was found to be still preserved. There was slight discoloration of the face which has been explained as being due to the washing process of the first exhumation.

A wax mask was applied to the face and the remains were then placed in a gold and glass reliquary in the Chapel of Saint Bernadette at the motherhouse in Nevers.

She was canonized in 1933, not so much for the content of her visions, but rather for her simplicity and holiness of life. She is the patron saint of sick persons and of Lourdes.

Her life was given a fictionalised treatment in Franz Werfel's novel The Song of Bernadette, which was later adapted into a 1943 film starring Jennifer Jones as Bernadette (and the uncredited Linda Darnell as the Immaculate Conception). Jones won her only Best Actress Oscar for this portrayal. A more realistic version of Bernadette's life is presented in the 1988 film by Jean Dellanoy, Bernadette.

Yearly, from March to October, the Sanctuary of Our Lady of Lourdes is the place of mass pilgrimages from Europe and other parts of the world. The spring water from the grotto is believed by some to possess healing properties, and the Catholic Church has officially recognized 67 miraculous healings. Especially impressive are candlelight and sacrament processions.