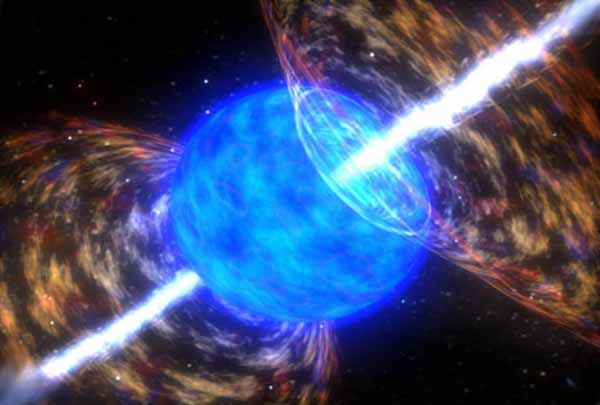 Gamma rays (also called gamma radiation) are penetrating electromagnetic radiation of a kind arising from the radioactive decay of atomic nuclei. It consists of photons in the highest observed range of photon energy. Paul Villard, a French chemist and physicist, discovered gamma radiation in 1900 while studying radiation emitted by radium. In 1903, Ernest Rutherford named this radiation gamma rays. Rutherford had previously discovered two other types of radioactive decay, which he named alpha and beta rays.

Gamma rays are able to ionize other atoms (ionizing radiation), and are thus biologically hazardous. The decay of an atomic nucleus from a high energy state to a lower energy state, a process called gamma decay, produces gamma radiation. Natural sources of gamma rays on Earth are observed in the gamma decay of radionuclides and secondary radiation from atmospheric interactions with cosmic ray particles. There are rare terrestrial natural sources, such as lightning strikes and terrestrial gamma-ray flashes, that produce gamma rays not of a nuclear origin.


Articles in the News

Astronomers detect once-in-a-lifetime gamma rays   PhysOrg - November 14, 2018
n a cluster of some of the most massive and luminous stars in our galaxy, about 5,000 light years from Earth, astronomers detected particles being accelerated by a rapidly rotating neutron star as it passed by the massive star it orbits only once every 50 years. The discovery is extremely rare


Gamma-ray burst captured in unprecedented detail   Science Daily - July 27, 2017
Gamma-ray bursts are among the most energetic and explosive events in the universe. They are also short-lived, lasting from a few milliseconds to about a minute. This has made it tough for astronomers to observe a gamma-ray burst in detail. Using a wide array of ground- and space-based telescope observations, astronomers constructed one of the most detailed descriptions of a gamma-ray burst to date.


Five billion light years across: The largest feature in the universe   Science Daily - August 4, 2015
Astronomers have found what appears to be the largest feature in the observable universe: a ring of nine gamma ray bursts -- and hence galaxies - 5 billion light years across. Gamma-ray bursts (GRBs) are the most luminous events in the universe, releasing as much energy in a few seconds as the Sun does over its 10 billion year lifetime. They are thought to be the result of massive stars collapsing into black holes. Their huge luminosity helps astronomers to map out the location of distant galaxies, something the team exploited. The GRBs that make up the newly discovered ring were observed using a variety of space- and ground-based observatories. They appear to be at very similar distances from us -- around 7 billion light years -- in a circle 36ˇ across on the sky, or more than 70 times the diameter of the Full Moon.


For an Earth-orbiting gamma-ray telescope, Earth is actually the brightest source of gamma-rays, the most energetic form of light. Gamma-rays from Earth are produced when high energy particles, cosmic rays from space, crash into the atmosphere. While that interaction blocks harmful radiation from reaching the surface, those gamma-rays dominate in this remarkable Earth and sky view from the orbiting Fermi Gamma-ray Space Telescope's Large Area Telescope. The image was constructed using only observations made when the center of our Milky Way galaxy was near the zenith, directly above the Fermi satellite. The zenith is mapped to the center of the field. The Earth and points near the nadir, directly below the satellite, are mapped to the edges of the field resulting in an Earth and all-sky projection from Fermi's orbital perspective. The color scheme shows low intensities of gamma-rays as blue and high intensities as yellowish hues on a logarithmic scale. Our fair planet's brighter gamma-ray glow floods the edges of field, the high intensity yellow ring tracing Earth's limb. Gamma-ray sources in the sky along the relatively faint Milky Way stretch diagonally across the middle. Launched June 11, 2008 to explore the high-energy Universe, this week Fermi celebrated its 2,000th day in low Earth orbit.


Universe's Biggest Explosions Shaped by Extreme Magnetic Fields   Live Science - December 4, 2013
Scientists have captured their best view yet of how extreme magnetic fields shape superfast jets from the most powerful explosions in the universe. The new research tracked polarized light from cosmic explosions, known as gamma-ray bursts, and offered an unprecedented glimpse into how intense magnetic fields shape the evolution of the outbursts.


Earth's Gold Came from Colliding Dead Stars   Science Daily - July 17, 2013
This artist's conception portrays two neutron stars at the moment of collision. New observations confirm that colliding neutron stars produce short gamma-ray bursts. Such collisions produce rare heavy elements, including gold. All Earth's gold likely came from colliding neutron stars. Gold is rare on Earth in part because it's also rare in the universe. Unlike elements like carbon or iron, it cannot be created within a star. Instead, it must be born in a more cataclysmic event -- like one that occurred last month known as a short gamma-ray burst (GRB). Observations of this GRB provide evidence that it resulted from the collision of two neutron stars -- the dead cores of stars that previously exploded as supernovae. Moreover, a unique glow that persisted for days at the GRB location potentially signifies the creation of substantial amounts of heavy elements - including gold.