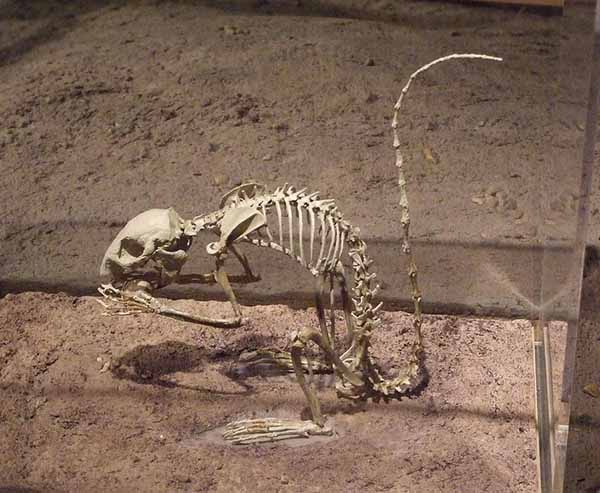 The earliest known squirrels date from the Eocene and are most closely related to the mountain beaver and to the dormouse among living rodent families. Read more ...

The fossil was discovered in the Inner Mongolian region of China. The rock beds it was found in date to at least 125 million years ago to the Mesozoic Era, a time when dinosaurs roamed the Earth. With a length of 12-14cm (5-6in) and weight of about 70g (3oz), the creature was comparable in size and shape to modern-day flying squirrels. It had a fold of fur-covered skin membrane that stretched between the creature's fore and hind limbs. This large membrane combined with its light weight suggested it was an agile glider, the researchers said, although probably not deft enough to capture its prey mid-flight.


Ancient squirrel nest found in Yukon   SFU.ca - November 3, 2005
The fossilized remains of 25,000-year-old ground squirrel nests are shedding new light on the flora and fauna of the Yukon during the last ice age. The fossils were discovered in the Dawson city area in Canada. Frozen in permafrost for tens of thousands of years, the nests contain fossilized caches of food, seeds, bones and fecal pellets. These remains detail an unprecedented picture of a rich landscape characterized by tundra and arctic grassland plants during harsh ice-age climates. Almost all of the plant species found in the nests aren't found in the area today. Most of them are presently restricted to high alpine tundra or in rare habitats such as dry prairies or salt flats. In fact, ground squirrels are no longer found at the fossil sites because they can't tunnel through the permafrost. But during the last ice age the area was a cold, dry grassland tundra with soils perfect for burrowing. The ground squirrels' fecal pellets likely fertilized the soil, creating nutritious vegetation for the woolly mammoths and bison also known to have inhabited the area. Yet most paleontology in the arctic is focused on large animals like bison. Comparing the fossil plant remains with what is known about the ground squirrel's diet in present day tundra indicates their diet hasn't changed much over several thousand years, demonstrating their ability to adapt to pronounced ecological change.