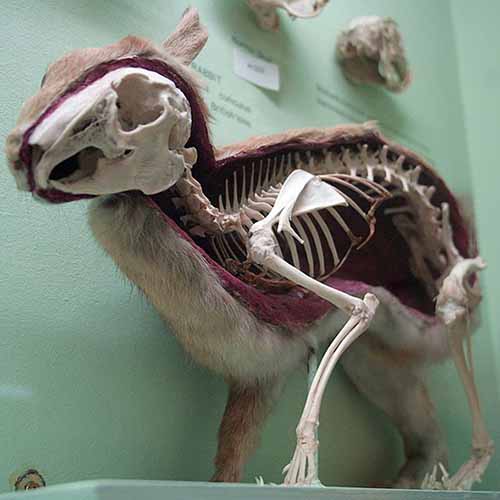 Rabbits are small mammals in the family Leporidae of the order Lagomorpha, found in several parts of the world. There are eight different genera in the family classified as rabbits, including the European rabbit (Oryctolagus cuniculus), cottontail rabbits (genus Sylvilagus; 13 species), and the Amami rabbit (Pentalagus furnessi, an endangered species on Amami Oshima, Japan). There are many other species of rabbit, and these, along with pikas and hares, make up the order Lagomorpha. The male is called a buck and the female is a doe; a young rabbit is a kitten or kit. Read more ...


King of Rabbits: Ancient, Gigantic Bunny Discovered   Live Science - March 21, 2011
Just in time for Easter, the skeleton of a giant rabbit has been discovered, one that was once about six times the size of today's bunnies. The fossils of the giant were discovered on the island of Minorca off the coast of Spain, a fact reflected in the rabbit's scientific name, Nuralagus rex, "the Minorcan king of the rabbits.


Fossil finds are rabbit forebears BBC - February 22, 2008
Fossil hunters have found the remains of ancient mammals that were related to today's rabbits and hares. The 53-million-year-old specimens consist of small ankle bones unearthed in Gujarat, central India. They belong to early examples of an animal group called lagomorphs, which today comprises hares, rabbits and a hamster-like animal called a pika.


Oldest fossil 'rabbit' unearthed BBC - February 17, 2005
The fossilized skeleton of a rabbit-like creature that lived 55 million years ago has been found in Mongolia, Science magazine reports. Gomphos elkema, as it is known, is the oldest member of the rabbit family ever to be found. Gomphos was surprisingly similar to modern rabbits - and probably hopped around on its elongated hindlimbs. The fossil adds weight to the idea that rabbit-like creatures first evolved no earlier than 65 million years ago.