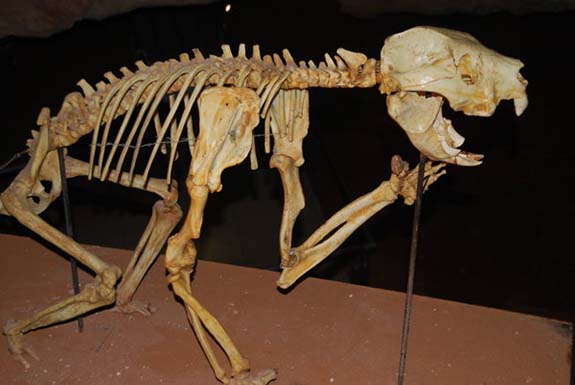 Marsupials are an infraclass of mammals living primarily in Australasia and the New World. A distinctive characteristic, common to most species, is that the young are carried in a pouch. Well-known marsupials include kangaroos, wallabies, the koala, possums, opossums, wombats and the Tasmanian devil. Less well-known species of marsupials include the numbat, bandicoots, bettongs, the bilby, quolls, and the quokka.

Marsupials represent the clade originating with the last common ancestor of extant metatherians. Like other mammals in the Metatheria, they are characterized by giving birth to relatively undeveloped young, often residing in a pouch with the mother for a certain time after birth. Close to 70% of the 334 extant species occur in Australia, New Guinea, and nearby islands, with the remaining 100 found in the Americas, primarily in South America, but with 13 in Central America, and one in North America north of Mexico.

The kangaroo is a marsupial from the family Macropodidae (macropods, meaning 'large foot'). In common use the term is used to describe the largest species from this family, especially those of the genus Macropus, red kangaroo, antilopine kangaroo, eastern grey kangaroo and western grey kangaroo. Kangaroos are endemic to Australia, and one genus, the tree-kangaroo, is also found in Papua New Guinea.

New species of extinct marsupial lion discovered in Australia   PhysOrg - December 7, 2017
A team of Australian scientists has discovered a new species of marsupial lion which has been extinct for at least 19 million years. Wakaleo schouteni was a predator that stalked Australia's abundant rainforests some 18 to 26 million years ago in the late Oligocene to early Miocene era. This meat-eating marsupial is estimated to have been about the size of a dog and weighed around 23 kilograms. The new species is about a fifth of the weight of the largest and last surviving marsupial lion, Thylacoleo carnifex, that weighed in at around 130 kilograms and which has been extinct for 30,000 years. Members of this family, the Thylacoleonidae, had highly distinct large, blade-like, flesh-cutting premolars that they used to tear up prey.


Giant Australian marsupials were like no other   PhysOrg - September 28, 2017
= A giant prehistoric Ice Age marsupial related to wombats and koalas has been discovered to be the only marsupial known to have ever followed annual seasonal migration. Likening it to "Australia's Ice Age Serengeti," the University of Queensland's Dr Gilbert Price tracked the now extinct megafauna diprotodon - a three-tonne beast up to 1.8 metres tall and 3.5 metres long - using fossils and geochemistry tools.


Remains of bizarre group of extinct snail-eating Australian marsupials discovered   Science Daily - May 27, 2016
Fossil remains of a previously unknown family of carnivorous Australian marsupials that lived 15 million years ago have been discovered at the Riversleigh World Heritage Fossil Site in north-western Queensland. The ancient animals appeared to eat snails using a huge, hammer-like premolar that would have been able to crack the strongest of snail shells.


Ancient Mini Kangaroos Had No Hop, They Scurried   Live Science - March 2, 2016
Two newly described species of tiny kangaroos that lived between 18 million and 23 million years ago scurried rather than hopped, a new study finds. But although these pint-size kangas were short on bounce, they outperformed their fanged kangaroo relatives, which lived alongside them and eventually went extinct, researchers say. In a recent study, researchers described a new kangaroo genus, Cookeroo, and two new species: Cookeroo bulwidarri, dated to about 23 million years ago,and Cookeroo hortusensis, which lived between 18 million and 20 million years ago. Both species were found at the Riversleigh World Heritage area in northwestern Queensland, Australia, a location recognized as one of the richest fossil deposits in the world 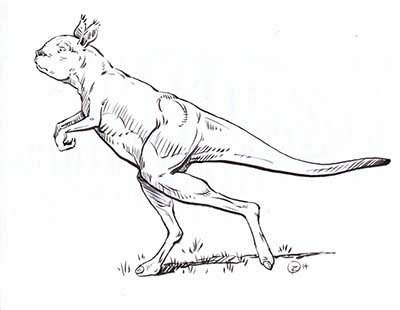 The ancestors of modern-day kangaroos, giant marsupials with rabbitlike faces, may have walked upright on two feet, sans any hopping, a new study finds. These enormous creatures, part of the extinct family of sthenurine kangaroos, once roamed the Australian outback from about 100,000 to 30,000 years ago. But they were likely bad hoppers, said lead researcher Christine Janis, a professor of ecology and evolutionary biology at Brown University in Rhode Island.


Giant kangaroos 'walked on two feet'   BBC - October 16, 2014
Too big to hop? Analysis of their bones suggests that the extinct roos walked on their hind legs. They roamed Australia while mammoths and Neanderthals lived in Europe - and it now seems they did so by putting one heavy foot in front of the other. According to new research, the extinct "sthenurine" family of giant kangaroos, up to three times larger than living roos, was able to walk on two feet.


Massive Marsupials Once Swung from Treetops Down Under   Live Science - November 27, 2012
Some 15 million years ago, mobs of 150-pound (70-kilogram) marsupials roamed the treetops of Australia's rain forests, researchers say. Nimbadon lavarackorum belonged to a family of large-bodied marsupials known as the diprotodontids that went extinct about 11,000 years ago. During the diprotodontids' reign in Australia, they ranged from sheep-size wombatlike creatures to the mega-herbivore Diprotodon, which stood at 13 feet (4 meters) tall and weighed up to 6,100 pounds (2,800 kg). Nimbadons were on the small-end of this spectrum, and they lived during the Middle Miocene (about 16 million to 11.6 million years ago). These ancient marsupials are best known from 26 different specimens found at the bottom of a vertical cave in northwestern Queensland, where a group of them apparently plunged to their deaths. In a new study, researchers examined Nimbadon bones and compared them with other species to get a clearer picture of how these ancient animals might have lived.


'Giant wombat' skeleton found in Australia's Queensland   BBC - July 6, 2011
Scientists in Australia have found the skeleton of a "giant wombat" which lived some two million years ago. The plant-eating marsupial would have been the size of a four-wheel drive car and weighed three tonnes, experts say.


Weird Australian hammer-tooth marsupial fossil found   PhysOrg - April 20, 2011
Fossils of bizarre lizard-like, snail-eating marsupials have been discovered by UNSW paleontologists in an ancient fossil field in the Riversleigh World Heritage area in Queensland. The fossils date back 10 to 17 million years ago.


Fossil Bones Suggest Ancient Marsupials Plunged to Death   Live Science - July 15, 2010
More than 20 marsupials, some still suckling newborns, plunged to their deaths 15 million years ago through a vertical cave entrance obscured by vegetation, new fossil evidence suggests. Researchers discovered the remains along a cave floor in Australia, revealing nearly the complete life cycle of this extinct wombat-like marsupial. In addition to well-preserved fossils of Nimbadon lavarackorum, the team also found the remains of galloping kangaroos, primitive bandicoots, a fox-sized thylacine and forest bats. The animals either fell to their deaths or survived the fall before being entombed and unable to escape, the evidence revealed.


Discovery Of The Oldest European Marsupial In Southwest France   Science Daily - November 9, 2009
Remains of one of the oldest known marsupials have been recovered in Charente-Maritime, France, by palaeontologists. This discovery raises a new hypothesis about the dispersal route of the earliest marsupial mammals. In the history of the first modern mammals (i.e., marsupials and placentals), during the Cretaceous, Europe is almost a Terra incognita. No fossils are known between 125 and 84 million years (my), and very few up to the Cretaceous-Tertiary boundary (65 my). In the Cenomanian (99 my) of Charente-Maritime, the discovery of the scientist team from the Museum1 (CNRS) and the University of Rennes 12 thus provides important information on the early history of these mammals in Europe. The discovery consists of a few teeth, collected after screen washing of 5 tons of sediment. They belong to a new tiny mammal, named Arcantiodelphys marchandi, which is one of the oldest and most primitive marsupial known in the world. It is also the oldest known representative of the modern therians in Europe


Australia: Caverns give up huge fossil haul BBC - January 24, 2007
An astonishing collection of fossil animals from southern Australia is reported by scientists. The creatures were found in limestone caves under Nullarbor Plain and date from about 400,000-800,000 years ago. The palaeontological "treasure trove" includes 23 kangaroo species, eight of which are entirely new to science. The caves also yielded a complete specimen of Thylacoleo carnifex, an extinct marsupial lion. It appears the unsuspecting creatures fell to their deaths through pipes in the dusty plain surface that periodically opened and closed over millennia. Most of the animals were killed instantly but others initially survived the 20m drop only to crawl off into rock piles to die from their injuries or from thirst and starvation. 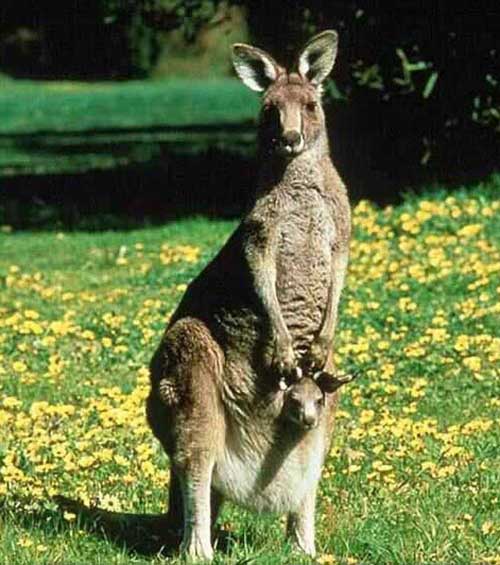