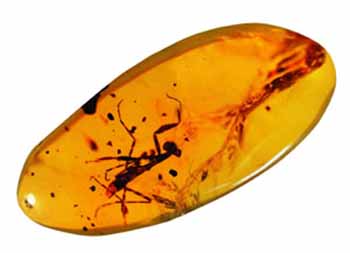 Prehistoric insects are various groups of insects that lived before recorded history. Their study is the field of paleoentomology. Insects inhabited Earth since before the time of the dinosaurs. The earliest identifiable insect is the Devonian Rhyniognatha hirsti, estimated at 407 to 396 million years ago. Forms similar to many modern insects had already evolved before the dawning of the dinosaur and lived alongside them and beyond up to the present day. Like today, prehistoric insects were an important part of the food chain in their time.

The differences between modern and prehistoric varieties can be essential, and, like many other creatures of prehistory, the latter tended to be much larger than their contemporary equivalents. This size difference is thought to be due to higher atmospheric oxygen levels (allowing diffusion through spiracles over greater distances), higher temperatures (enhancing metabolism), and the absence of birds as key predators of insect life.

Since insects have chitin exoskeletons rather than mineralized bones, their burial processes differ compared to the fossils of much larger vertebrates such as dinosaurs. Many insect remains are found preserved in the hardened sap of ancient trees (amber). Read more ...

World's oldest bug is fossil millipede from Scotland   PhysOrg - May 28, 2020
A 425-million-year-old millipede fossil from the Scottish island of Kerrera is the world's oldest "bug" - older than any known fossil of an insect, arachnid or other related creepy-crawly


New fossil pushes back physical evidence of insect pollination to 99 million years ago   PhysOrg - November 11, 2019
The revelation is based upon a tumbling flower beetle with pollen on its legs discovered preserved in amber deep inside a mine in northern Myanmar. The fossil comes from the same amber deposit as the first ammonite discovered in amber, which was reported by the same research group earlier this year.


Newborn insects trapped in amber show first evidence of how to crack an egg   PhysOrg - December 20, 2018
Fossilized newborns, egg shells, and egg bursters preserved together in amber provide the first direct evidence of how insects hatched in deep time. One of the earliest and toughest trials that all organisms face is birth. The new findings give scientists evidence on how tiny insects broke the barrier separating them from life and took their first steps into an ancient forest. Trapped together inside 130 million-year-old Lebanese amber, or fossilized resin, researchers found several green lacewing newborn larvae, the split egg shells from where they hatched, and the minute structures the hatchlings used to crack the egg, known as egg bursters. The discovery is remarkable because no definitive evidence of these specialized structures had been reported from the fossil record of egg-laying animals, until now. The fossil newborns have been described as the new species Tragichrysa ovoruptora, meaning 'egg breaking' and 'tragic green lacewing', after the fact that multiple specimens were ensnared and entombed in the resin simultaneously.


Half a billion-year-old brains of terrifying sea monsters related to today's spiders and insects are found perfectly preserved in Greenland   Daily Mail - March 16, 2018
The half a billion-year-old brains and nervous systems of 15 ancestors of modern-day spiders and insects have been found in the frozen shale of Greenland. The brains and nervous tissue belong to a type of marine predator known as Kerygmachela kierkegaardi which existed around 521 and 514 million years ago. These sea monsters are believed to have had two long appendages on their head, 11 swimming flaps and a skinny tail to help them hunt their prey. Unlike the human brain, which has three segments, the fossilized brains of these predators only had a single segment.


Extinct E.T.? Alien-Like Insect Found Trapped in Amber   Live Science - January 27, 2017
The 100-million-year-old remains of an alien-looking female insect - complete with a triangular head and bulging eyes - have been discovered encased in a glob of hardened resin called amber. The tiny creature, now called Aethiocarenus burmanicus, did not land on Earth via spaceship, but rather lived in what are now mines in Hukawng Valley in Myanmar, the researchers said. There, hiding out in the miniscule cracks in tree bark, the insect may have hunted for mites, worms or fungi, the researchers added. Nearby, dinosaurs would have lumbered by, the scientists who discovered these remains said. In fact, the extinct "extraterrestrial" was so different from other insects that its discoverers have created an entirely new order, called Aethiocarenodea, for the creature. An order is a scientific classification for organisms that is broader than a genus and family.


New Cretaceous fossils shed light on the early evolution of ants   PhysOrg - June 1, 2016
Ants comprise one lineage of the triumvirate of eusocial insects and experienced their early diversification within the Cretaceous. The success of ants is generally attributed to their remarkable social behavior. Recent studies suggest that the early branching lineages of extant ants formed small colonies of either subterranean or epigeic, solitary specialist predators. The vast majority of Cretaceous ants belong to stem-group Formicidae and comprise workers and reproductives of largely generalized morphologies, and it is difficult to draw clear conclusions about their ecology, although recent discoveries from the Cretaceous suggest relatively advanced social levels.


Chinese mosquitoes on the Baltic Sea: Ancient insect inclusions in East-Asian amber   Science Daily - July 30, 2014
> The analysis of the roughly 3,000 pieces is still in its infant stage. But it is already evident that the results will be of major significance. The Baltic amber comes from the Baltic Sea region, which is almost 10,000 kilometers from Fushun. Sites rich in finds are, e.g., the coastal regions of Mecklenburg, Poland and Belarus. The pieces from the Baltic region are slightly younger than the ones from FushunĐaccording to estimates, about 40 to 50 million years.


Decades-old amber collection offers new views of a lost world: Tiny grasshopper encased in amber   Science Daily - July 30, 2014
Scientists are searching through a massive collection of 20-million-year-old amber found in the Dominican Republic more than 50 years ago, and the effort is yielding fresh insights into ancient tropical insects and the world they inhabited. Perhaps the most striking discovery thus far is that of a pygmy locust, a tiny grasshopper the size of a rose thorn that lived 18- to 20-million years ago and fed on moss, algae and fungi.


Ancient Insects Get Intricate Portraits   Live Science - August 11, 2013
Plants and insects form two of the most diverse groups of organisms on the planet, and their interactions with each other can be traced back more than 400 million years.


Humble bug plugs gap in fossil record   PhysOrg - August 2, 2012
One day 370 million years ago, a tiny larva came to a sticky end when it plunged into a shrimp-infested swamp and drowned. The humble bug now looks set to plug a giant gap in the fossil record. Scientists until now had few if any confirmed insect fossils from between 385 and 325 million years ago, a period known as the Hexapoda Gap.


Reign of the giant insects ended with the evolution of birds, study finds   PhysOrg - June 4, 2012
Giant insects ruled the prehistoric skies during periods when Earth's atmosphere was rich in oxygen. Then came the birds. After the evolution of birds about 150 million years ago, insects got smaller despite rising oxygen levels, according to a new study by scientists at the University of California, Santa Cruz.


Dinosaurs had fleas too -- giant ones, fossils show   PhysOrg - February 29, 2012
In the Jurassic era, even the flea was a beast, compared to its minuscule modern descendants. These pesky bloodsuckers were nearly an inch long. New fossils found in China are evidence of the oldest fleas - from 125 million to 165 million years ago, said Diying Huang of the Nanjing Institute of Geology and Paleontology. Their disproportionately long proboscis, or straw-like mouth, had sharp weapon-like serrated edges that helped them bite and feed from their super-sized hosts, he and other researchers reported today.


50-Legged Creature May Have Been Top Predator of Ancient Seafloor   Live Science - November 9, 2011
An ancient cockroach-like creature nearly a foot long once skittered along the seafloor in what is now Canada, a new fossil find reveals. The fossil, a series of 500-million-year-old tracks, captured the movement of a large seafloor-dwelling creature with at least 25 pairs of legs. The animal was likely an arthropod called Tegopelte, a rare giant very rarely found fossilized. Arthropods are invertebrates with exoskeletons, a group that includes today's crustaceans and insects.


Fossil moths reveal their true colors   PhysOrg - October 12, 2011
Moths dead for 47 million years are again showing their true colors. For the first time, scientists have reconstructed the colors of an ancient fossil moth. The findings detailed not just a few spots of color, but the appearance of the entire organism.


Ancient 'Frankenstein' Insect Discovered   Live Science - July 19, 2011
Insect "Frankensteins" have been discovered among fossils from a deposit in Brazil. The prehistoric creatures had the wings and middle-body segments of a dragonfly's, wing veins arranged like a mayfly and a praying mantis's forelegs. From two adult and about 30 larval fossils that came from the Brazilian fossil deposit and are now contained in collections around the world, the researchers created a new order - a broad category that can contain many species - called Coxoplectoptera. This newly named group of insects is long gone; it has no modern descendants, and the fossils date back 120 million years to the early Cretaceous Period.

Ancient 'Monster' Insect: 'Unicorn' Fly Never Before Observed   Science Daily - October 27, 2009
Just in time for Halloween, researchers have announced the discovery of a new, real-world "monster" - what they are calling a "unicorn" fly that lived about 100 million years ago and is being described as a new family, genus and species of fly never before observed.


Oldest Example Of Mutualism: Termites And Protozoa Discovered Together In Ancient Amber   Science Daily - May 15, 2009
The analysis of a termite entombed for 100 million years in an ancient piece of amber has revealed the oldest example of "mutualism" ever discovered between an animal and microorganism, and also shows the unusual biology that helped make this one of the most successful, although frequently despised insect groups in the world.


Scientists discover first fossil of a leaf insect PhysOrg - February 9, 2007
Stick and leaf insects both belong to the insect order Phamatodea, or phasmid for short, a term which shares the same roots as the word phantom. Besides appropriately describing the species' illusory presence mimicking natural flora, the rare leaf insect was proving to be illusive to scientists in search of the history behind the leaf insects - namely, through a complete absence of fossils.