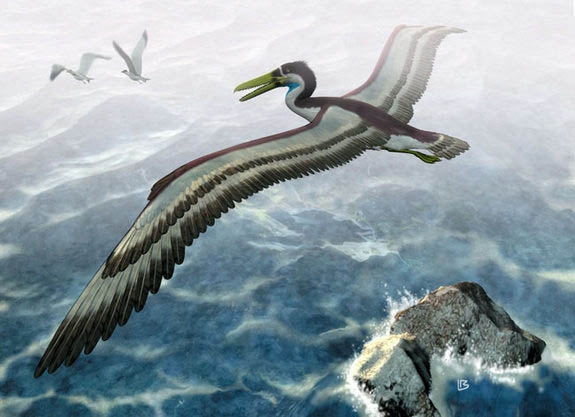 Fossils of true geese are hard to assign to genus; all that can be said is that their fossil record, particularly in North America, is dense and comprehensively documents many different species of true geese that have been around since about 10 million years ago in the Miocene. The aptly named Anser atavus (meaning "great-great-great-grandfather goose") from some 12 million years ago had even more plesiomorphies in common with swans. In addition, some goose-like birds are known from subfossil remains found on the Hawaiian Islands. Read more ...


Mother Of A Goose! Giant Ocean-going Geese With Bony-teeth Once Roamed Across SE England   Science Daily - September 27, 2008
A 50 million year old skull reveals that huge birds with a 5 meter wingspan once skimmed across the waters that covered what is now London, Essex and Kent. These giant ocean-going relatives of ducks and geese also had a rather bizarre attribute for a bird: their beaks were lined with bony-teeth.


Prehistoric Giant Goose Skull Found   Live Science - September 26, 2008
Scientists have found a new huge and well-preserved fossil of a goose and duck relative that swam around what is now England 50 million years ago flashing sharp, toothy smiles. The skull, discovered on the Isle of Sheppey off the southeast coast of England in the Thames Estuary, belonged to a huge ancient bird in the extinct genus Dasornis, which had a whopping 16-foot (5-meter) wingspan. Scientists had found fossils of other bony-toothed birds, or pelagornithids, in deposits called the London Clay, which underlies much of London, Essex and northern Kent in the southeast of England. This new fossil, from the same clay layer, is one of the most well-preserved fossils ever found there and has provided scientists with previously unknown details of the birds' anatomy. Like all living birds, Dasornis had a beak made of keratin, the same substance that forms our hair and fingernails. But unlike modern birds, whose ancestors lost their teeth through evolutionary processes, Dasornis had bony "pseudo-teeth" (true teeth are made of enamel and dentine). The ancestors of modern birds likely lost their teeth to save weight and make flying easier, but that bony-toothed birds such as Dasornis re-evolved them for dietary reasons. These birds probably skimmed across the surface of the sea, snapping up fish and squid on the wing. With only an ordinary beak, these would have been difficult to keep hold of, and the pseudo-teeth evolved to prevent meals slipping away.