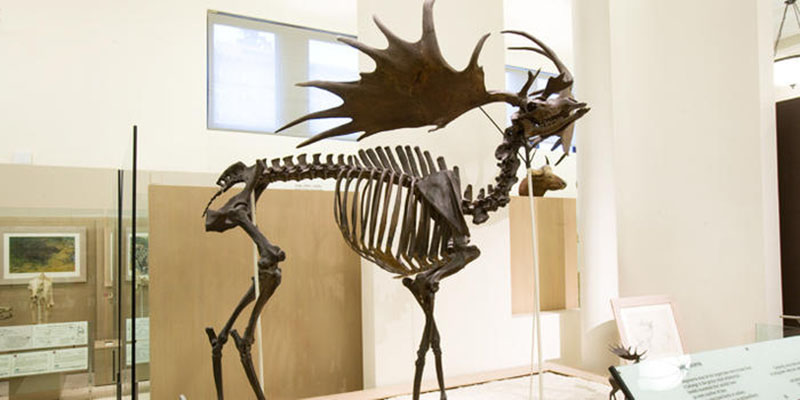 Members of the genus Cervus (and hence early relatives or possible ancestors of the elk) first appear in the fossil record 25 million years ago, during the Oligocene in Eurasia, but do not appear in the North American fossil record until the early Miocene. The extinct Irish Elk (Megaloceros) was not a member of the genus Cervus, but rather the largest member of the wider deer family (Cervidae) known from the fossil record. Read more ...


Students Discover 11,000-Year-Old Remains Of Irish Elk Science Daily - November 14, 2005
A group of history students have discovered the antler of an Irish Elk in cliffs near Kirk Michael on the Isle of Man. Although the exact age of the antler has yet to be determined, the position of the remains indicates that the elk (Megaloceros giganteus) lived around 11,000 years ago. The giant deer roamed the open tundra landscape that was widespread in northern Europe at the end of the last Ice Age, as the glaciers retreated northwards.

The students who found the elk were taking part in a field trip examining the Manx landscape. Dr Peter Davey, Director of the Centre for Manx Studies and Reader in Archaeology at the University who was leading the group at the time, said: "It's absolutely amazing -- most of the time when I come out here with students to demonstrate the structure of the deposits in the cliffs, we only see sediments such as gravels, sands, muds and peats.

As the block was in danger of imminent collapse, which would have crushed the antler, Dr Davey arranged for a team to remove it almost immediately. The antler is now being cleaned, examined and re-constructed by Dr Philippa Tomlinson from the Centre for Manx Studies who is a specialist in fossil and archaeological bone and plant remains. Environmental historians believe the landscape of the Isle of Man remained suitable for the giant deer for several more hundred years than surrounding islands because of the possible slower rate of colonization by forest after the Ice Age, before the elk finally became extinct.

The remains, which will now be scientifically dated, could add to growing evidence that giant deer were present on the island much later than paleozoologists originally thought. The antler was found in a 'kettle hole' -- a hollow created when blocks of ice melt, now exposed in the eroding the cliff face. Its stratigraphic position, high up in the kettle hole, may provide a later date for the presence of giant deer on the island than previous studies. 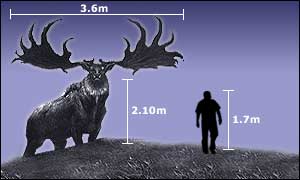 The giant Irish Elk survived the last ice age - but probably only just. The enormous deer, which sported antlers 3.6m wide (10 feet), was thought to have perished along with woolly mammoths in the frozen wastes. But new fossil dating evidence shows that at least some of the beasts survived to warmer times. The revelation raises the possibility that humans, not the climate, may have driven the majestic creature into extinction. However, just 20 bone samples from Irish Elks have been dated and the ongoing program of research is expected to reveal more surprises about how they met their fate.

The bone samples were found in Britain on the Isle of Man and in southwest Scotland. They were only dated, using radiocarbon techniques, to determine the age of an interesting geological deposit. Adrian Lister, at University College London, was surprised when the analysis of two fragments revealed ages of 9,200 and 9,400 years ago. This is long after the previous youngest find, 10,600 years ago. Dr Lister told BBC News Online: "It's quite possible that the ice age could have squeezed the populations down to one or two relics on the western fringe of Europe, like we see here." But he pointed out that only 20 radiocarbon dates have ever been obtained for giant elks, leaving the possibility that many elks survived the ice age. By contrast, over 500 dates have been obtained for mammoths. Data from a Siberian island also shows that some mammoths survived the ice age.

The last ice age stretched from 100,000 years ago to 10,000 years ago. Giant elk are known to have existed right across Europe since 400,000 years ago. But the evidence that they survived the ice age leaves open the possibility that human hunters may have finally wiped out the elks. Against this idea, is the fact that, so far, no post-ice age evidence of human presence has been found in the area before 7,000 years ago. w data collected by Dr Lister, and his colleagues, also shows that the elks did not drift through the ice age unchanged. In the UK, at least, they got smaller, which may be the result of food becoming scarce. Intriguingly though, their spectacular antlers remained as huge: "You would especially expect the antlers to get smaller as they are so-called luxury organs - they should be the first thing to go. But we found the exact opposite, that these little animals had got relatively large antlers. This suggests that the need for large, "expensive" antlers outweighs even the threat of starvation. "