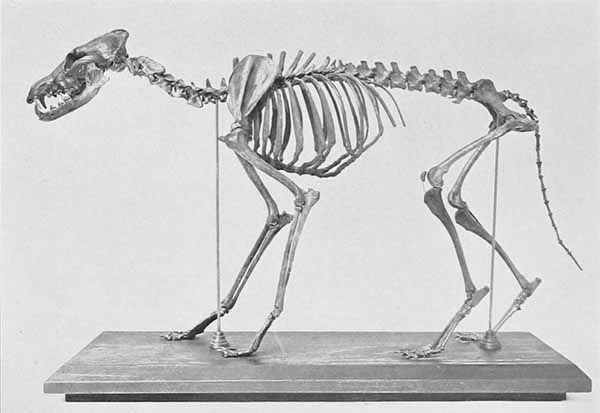 The earliest fossil carnivores that can be linked with some certainty to canids are the Eocene Miacids, which lived some 38 to 56 million years ago. The Miacids later diverged into caniforms and feliforms, with the former line leading to such genera as the coyote-sized Mesocyon of the Oligocene (38 to 24 million years ago), the fox-like Leptocyon and the wolf-like Tomarctus which inhabited North America some 10 million years ago. The coyote represents a more primitive form of Canis than the gray wolf, as shown by its relatively small size and its comparatively narrow skull and jaws, which lack the grasping power necessary to hold the large prey wolves specialize in. This is further corroborated by the coyote's sagittal crest, which is low or totally flattened, thus indicating a weaker bite than the wolf's. The coyote is not a specialized carnivore as the wolf is, as shown by the larger chewing surfaces on the molars, reflecting the species' relative dependence on vegetable matter. In these respects, the coyote resembles the fox-like progenitors of the genus more so than the wolf. Modern phylogenetics places the coyote between the gray wolf and golden jackal. 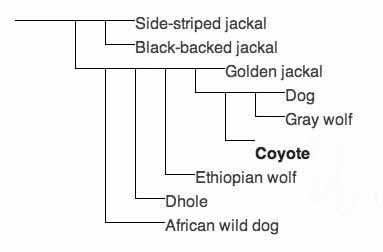 The evolution of the coyote is remarkably well documented, and can be traced back in an unbroken line to the Hemphillian Eucyon davisi. The coyote likely arose from a certain population of the Blancan species C. lepophagus which, although similar in weight to modern coyotes, had shorter limb bones, thus indicating a less cursorial lifestyle. Modern coyotes arose during the Middle Pleistocene, and showed much more variation than they do today. Compared to their modern Holocene counterparts, Pleistocene coyotes (C. l. orcutti) were larger and more robust, likely in response to larger competitors and prey. Pleistocene coyotes were likely more specialized carnivores than their descendants, as their teeth were more adapted to shearing meat, showing fewer grinding surfaces suited for processing vegetation. Their reduction in size occurred within 1000 years of the Quaternary extinction event, when their large prey died out. Furthermore, Pleistocene coyotes were unable to exploit the big game hunting niche left vacant after the extinction of the dire wolf, as it was rapidly filled by gray wolves, which likely actively killed off the large coyotes, with natural selection favoring the modern gracile morph.


Ice Age coyotes were supersized, fossil study reveals   PhysOrg - February 27, 2012
Coyotes today are pint-sized compared to their Ice Age counterparts, finds a new fossil study. Between 11,500 and 10,000 years ago - a mere blink of an eye in geologic terms - coyotes shrunk to their present size. The sudden shrinkage was most likely a response to dwindling food supply and changing interactions with competitors, rather than warming climate, researchers say. In a paper appearing this week in Proceedings of the National Academy of Sciences, researchers studied museum collections of coyote skeletons dating from 38,000 years ago to the present day. It turns out that between 11,500 and 10,000 years ago, at the end of a period called the Pleistocene, coyotes in North America suddenly got smaller.