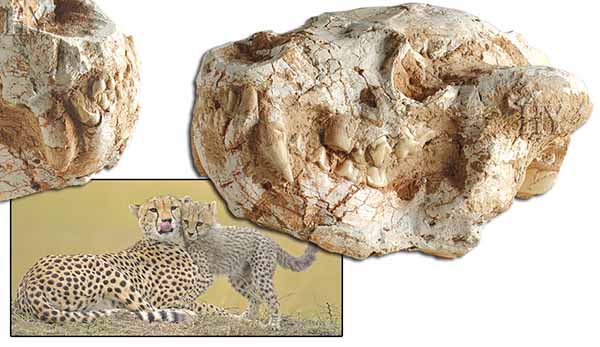 The cheetah was formerly considered to be particularly primitive among the cats and to have evolved approximately 18 million years ago. However, new research suggests the last common ancestor of all 40 existing species of felines lived more recently than about 11 million years ago. The same research indicates that the cheetah, while highly derived morphologically, is not of particularly ancient lineage, having separated from its closest living relatives (Puma concolor, the cougar, and Puma yaguarondi, the jaguarundi) around five million years ago. These felids have not changed appreciably since they first appeared in the fossil record. Read more ...

Ancient Fossil Suggests Origin of Cheetahs   Live Science - December 30, 2008
A nearly complete skull of a primitive cheetah that sprinted about in China more than 2 million years ago suggests the agile cats originated in the Old World rather than in the Americas. The skull was discovered in Gansu Province, China, and represents a new cheetah species, now dubbed Acinonyx kurteni, said Per Christiansen of the Zoological Museum in Denmark, who studied the fossil. The animal probably lived some time between 2.2 million and 2.5 million years ago, making the specimen one of the oldest cheetah fossils identified to date, he said.