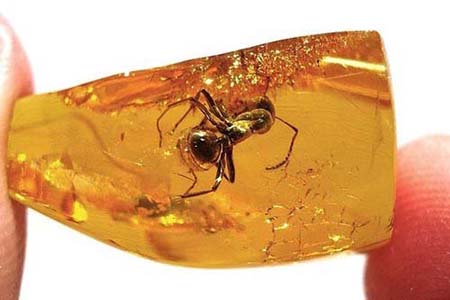 Up until recently, the oldest non-compression bee fossil had been Cretotrigona prisca in New Jersey amber and of Cretaceous age, a meliponine. A recently reported bee fossil, of the genus Melittosphex, is considered "an extinct lineage of pollen-collecting Apoidea sister to the modern bees", and dates from the early Cretaceous (~100 mya). Derived features of its morphology ("apomorphies") place it clearly within the bees, but it retains two unmodified ancestral traits ("plesiomorphies") of the legs (two mid-tibial spurs, and a slender hind basitarsus), indicative of its transitional status. Read more ...


Bee Fossils Provide Rare Glimpse into Ice Age Environment   Live Science - April 10, 2014
A new analysis of rare leafcutter-bee fossils excavated from the Rancho La Brea Tar Pits in Southern California has provided valuable insight into the local environment during the last Ice Age. The La Brea Tar Pits, located in Los Angeles, contain the world's richest deposits of Ice Ace fossils, and are best known for their collection of saber-toothed cats and mammoths. In the new study, researchers used high-resolution micro-computed tomography (CT) scanners to analyze two fossils of leaf-cutter-bee nests excavated from the pits. By examining the nest cell architecture and the physical features of the bee pupae (stage of development where the bee transforms into an adult from a larva) within the leafy nests, and cross-referencing their data with environmental niche models that predict the geographic distribution of species, the scientists determined their Ice Age specimens belonged to Megachile gentilis, a bee species that still exists today.


Israel: Archaeologists Discover Ancient Beehives Science Daily - September 4, 2007
Archaeologists revealed that the first apiary (beehive colony) dating from the Biblical period has been found in excavations in Israel's Beth Shean Valley. This is the earliest apiary to be revealed to date in an archaeological excavation anywhere in the ancient Near East, according to the researcher.


Oldest bee fossil: 100 million-year-old fossil found in a mine in Myanmar   NBC - October 26, 2006
The discovery of the oldest bee fossil supports the theory that bees evolved from wasps, scientists reported Wednesday. The 100 million-year-old fossil was found in a mine in the Hukawng Valley of Myanmar (Burma) and preserved in amber. Amber, which begins as tree sap, often traps insects and plant structures before they fossilize."This is the oldest known bee we've ever been able to identify, and it shares some of the features of wasps," said lead author George Poinar, a researcher from Oregon State University. "But overall it's more bee than wasp, and gives us a pretty good idea of when these two types of insects were separating on their evolutionary paths."