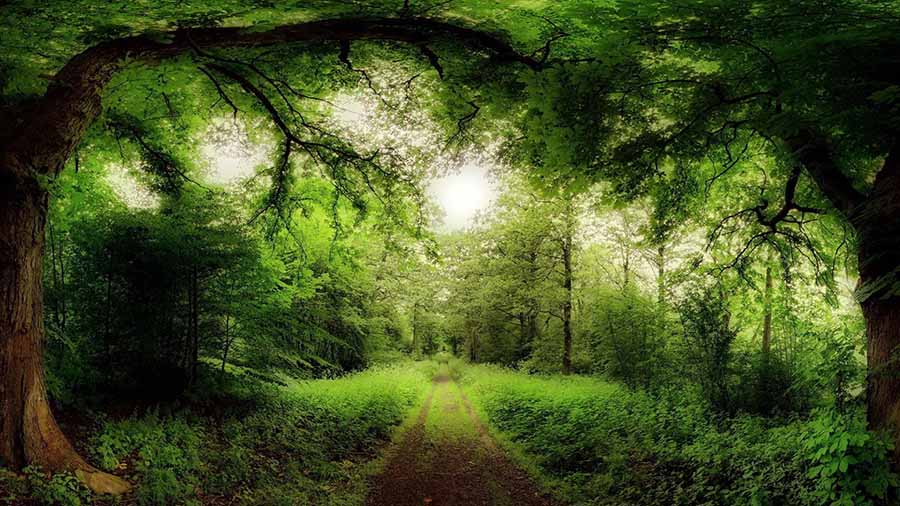 A forest, also referred to as a wood or the woods, is an area with a high density of trees. As with cities, depending on various cultural definitions, what is considered a forest may vary significantly in size and have different classifications according to how and of what the forest is composed. A forest is usually an area filled with trees but any tall densely packed area of vegetation may be considered a forest, even underwater vegetation such as kelp forests, or non-vegetation such as fungi, and bacteria.

A typical tree forest is composed of the over-story (canopy or upper tree layer) and the understory. The understory is further subdivided into the shrub layer, herb layer, and also the moss layer and soil microbes. In some complex forests, there is also a well-defined lower tree layer. Forests are central to all human life because they provide a diverse range of resources: they store carbon, aid in regulating the planetary climate, purify water and mitigate natural hazards such as floods. Forests also contain roughly 90 percent of the world's terrestrial biodiversity. Read more ... 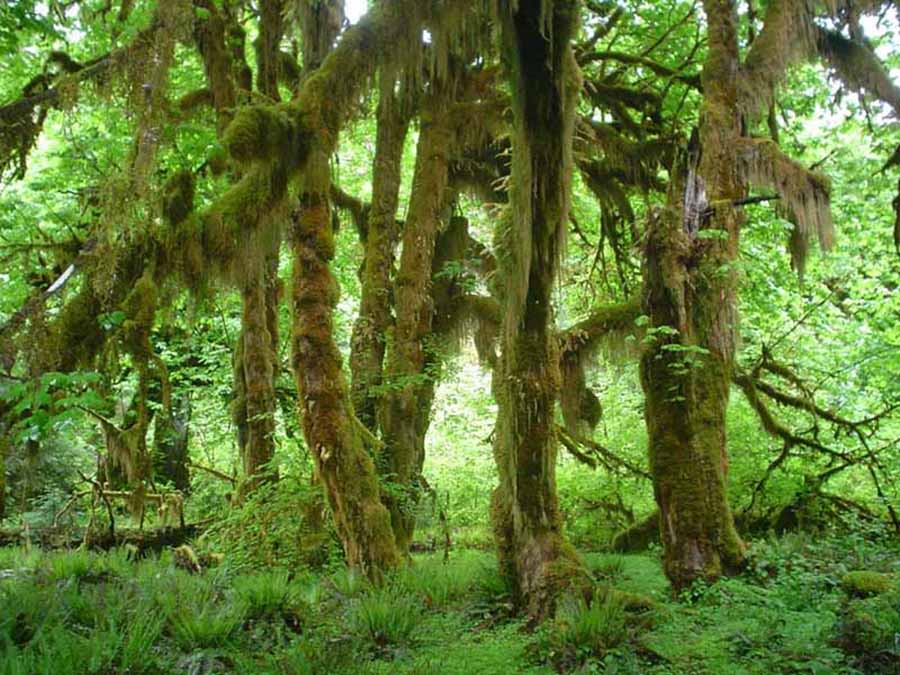 Rainforests are forests characterized by high rainfall, with annual rainfall between 250 centimetres (98 in) to 450 centimetres (180 in). The monsoon trough, alternatively known as the intertropical convergence zone, plays a significant role in creating the climatic conditions necessary for the Earth's tropical rainforests.

Around 40% to 75% of all biotic species are indigenous to the rainforests. It has been estimated that there may be many millions of species of plants, insects and microorganisms still undiscovered in tropical rainforests. Tropical rainforests have been called the "jewels of the Earth" and the "world's largest pharmacy", because over one quarter of natural medicines have been discovered there. Rainforests are also responsible for 28% of the world's oxygen turnover, sometimes misnamed oxygen production, processing it through photosynthesis from carbon dioxide and consuming it through respiration.

The undergrowth in some areas of a rainforest can be restricted by poor penetration of sunlight to ground level. If the leaf canopy is destroyed or thinned, the ground beneath is soon colonized by a dense, tangled growth of vines, shrubs and small trees, called a jungle. There are two types of rainforest, tropical rainforest and temperate rainforest. Read more ...

Scientists Finally Discover How 'Stone Forests' Develop Their Otherworldly Forms   Science Alert - September 12, 2020
According to ancient legend, a beautiful maiden named Ashima drowned in a river, and turned into stone. This, it has been said for centuries, is how China's stunning Stone Forest of Shilin first took shape. According to new research, however, there's another explanation for the phenomenon that gives stone forests their surreal and otherworldly forms, and while it might not quite match the magic and mystery of Ashima's tragic tale, it is perhaps a more convincing take in these modern, skeptical times. In a new study, scientists investigated the formation processes behind these jagged pillars, which naturally take on their spiky shapes after mineral formations submerged in water slowly dissolve over time once they become exposed to the air. 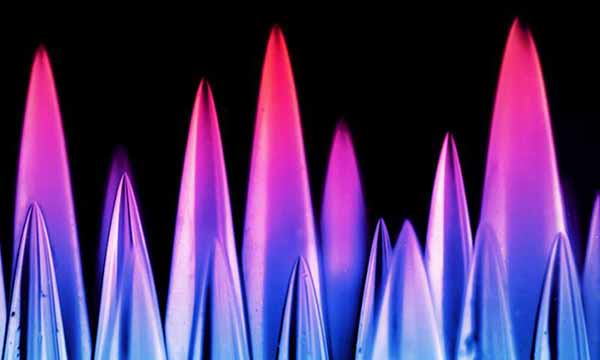 Video: How do stone forests get their spikes? New research offers pointed answer   PhysOrg - September 8, 2020
Stone forests - pointed rock formations resembling trees that populate regions of China, Madagascar, and many other locations worldwide - are as majestic as they are mysterious, created by uncertain forces that give them their shape. In their study, the scientists simulated the formation of these pinnacles over time through a mathematical model and computer simulations that took into account how dissolving produces flows and how these flows also affect dissolving and thus reshaping of a formation.

Fossils of Leaves in Borneo Reveal an Ancient 4 Million-Year-Old Forest   Science Alert - May 4, 2022
Leaf fossils on Borneo have been studied in detail for the first time, say researchers, revealing that the rainforests that cover the surface of the island have been in place and fostering biodiversity for at least 4 million years. 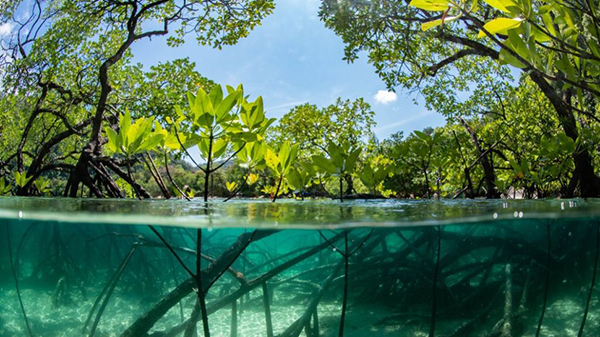 Normally, trees of this species - known as red mangroves, or Rhizophora mangle - grow only in salt water, along tropical coastlines. But this forest is located near the San Pedro River in the state of Tabasco, more than 125 miles (200 kilometers) from the nearest ocean. Somehow, these mangroves have adapted to live exclusively in this freshwater environment in southeast Mexico. Exactly how this ecological enigma came about has baffled scientists. But now, an international, multidisciplinary team of researchers has revealed that this out-of-place ecosystem began growing around 125,000 years ago, when sea levels were much higher and the ocean covered most of the region.


July was the hottest month ever recorded on Earth since the human biogenetic experiment began. Now massive wildfires are burning across the globe. Amazon, Siberia, Indonesia, more. 2019 Wildfires   Wikipedia

Amazon fires: What about Bolivia?   BBC - August 27, 2019
Fires do not stop at borders, and Bolivia's rainforest is burning too. The Amazon sprawls for millions of square miles across nine different countries - and Bolivia has seen fires rage across the forest near its borders with Brazil and Paraguay.


Greece wildfires: Blaze forces evacuations on island of Samos   BBC - August 26, 2019
Hundreds of people have been evacuated from hotels and beaches in Greece as firefighters tackle dozens of wildfires across the country. About 700 firefighters were deployed over the weekend as the fires spread, fanned by strong winds and hot, dry conditions, officials said. One of the worst fires, on the island of Samos, forced authorities to transfer people from several hotels. Wildfires often occur in Greece as temperatures rise in dry summer months.


In pictures: Wildfires ignite across Indonesia   BBC - August 23, 2019
As fires rage in Brazil's Amazon rainforest, the south-east Asian nation of Indonesia is witnessing a similarly devastating ecological tragedy unfold. The dry season has arrived in Indonesia - home to some of the world's oldest tropical forests - bringing with it its worst annual fire season since 2015. Close to 700 hotspots have been identified in fire-prone regions in Sumatra, Kalimantan and the Riau islands. They are often considered to be the planet's most bio-diverse places but large swathes are being destroyed in the name of large-scale commercial efforts. 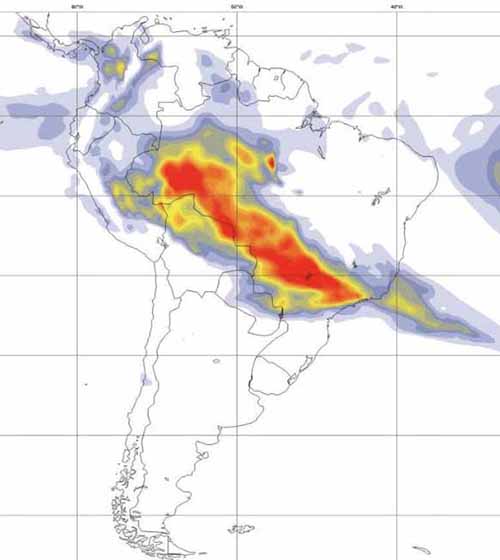 Smoke from the Amazon wildfires has covered almost half of Brazil. Wildfires are raging at a record rate in Brazil's Amazon rainforest. Environmental organizations and researchers say the wildfires were set by cattle ranchers and loggers who want to clear and utilize the land, emboldened by the country's pro-business president. The Amazon, the lungs of our planet produces 20% of our oxygen.


Research predicts extreme fires will increasingly be part of our global landscape   PhysOrg - February 6, 2017
Increasingly dangerous fire weather is forecast as the global footprint of extreme fires expands, according to the latest research. Extreme fire events are a global and natural phenomenon, particularly in forested areas that have pronounced dry seasons. They can't stop big, intense fires from happening i many places, as they are increasing under climate change. However, in the western US, they hope to reduce the potential for fire disasters by both reducing forest density and improving mitigation and preparedness through the development of fire-resilient communities. 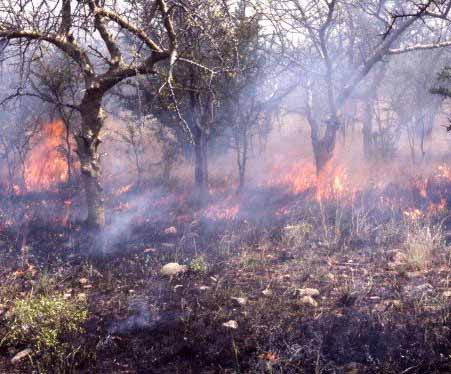 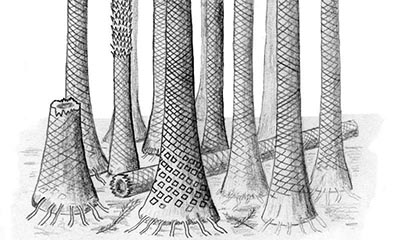 UK researchers have unearthed ancient fossil forests, thought to be partly responsible for one of the most dramatic shifts in the Earth's climate in the past 400 million years. The fossil forests, with tree stumps preserved in place, were found in Svalbard, a Norwegian archipelago situated in the Arctic Ocean. They were identified and described by Dr Chris Berry of Cardiff University's School of Earth and Ocean Science. Prof John Marshall, of Southampton University, has accurately dated the forests to 380 million years. The forests grew near the equator during the late Devonian period, and could provide an insight into the cause of a 15-fold reduction in levels of carbon dioxide (CO2) in the atmosphere around that time. Current theories suggest that during the Devonian period (420-360 million years ago) there was a huge drop in the level of CO2 in the atmosphere, thought to be largely caused by a change in vegetation from diminutive plants to the first large forest trees. 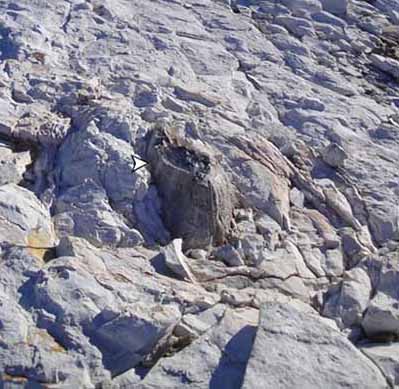 Strange forests with some features of today's tropical trees once grew in Antarctica, new research finds. Some 250 million years ago, during the late Permian and early Triassic, the world was a greenhouse, much hotter than it is today. Forests carpeted a non-icy Antarctic. But Antarctica was still at a high latitude, meaning that just as today, the land is bathed in round-the-clock darkness during winter and 24/7 light in the summer.


Giant Vines & Towering Trees: Ancient Forest Unearthed   Live Science - February 29, 2012
One of the earliest forests in the world was home to towering palmlike trees and woody plants that crept along the ground like vines, a new fossil find reveals. The forest, which stood in what is now Gilboa, N.Y., was first unearthed in a quarry in the 1920s. But now, a new construction project has revealed for the first time the forest floor as it stood 380 million years ago in the Devonian period.


First-of-Its-Kind Map Details the Height of the Globe's Forests   Science Daily - July 21, 2010
Using NASA satellite data, scientists have produced a first-of-its kind map that details the height of the world's forests. Although there are other local- and regional-scale forest canopy maps, the new map is the first that spans the entire globe based on one uniform method.


The Lost Forests of America   Live Science - April 24, 2009
You could plant any old tree to celebrate Arbor Day April 24. But consider instead a sugar maple, or another of the native trees that once abounded in this country. The forests that once dominated this nation were full of trees such as chestnuts, hemlocks and white pines on the East Coast and conifers such as redwoods and Douglas firs on the West Coast. Around the arrival of Columbus, "it's said that squirrels could travel from tree to tree from the Northeast to the Mississippi without ever having to touch the ground," said Chris Roddick, chief arborist at the Brooklyn Botanic Garden in New York. "In the old growth forests in the Northeast, you had hemlock that were six or seven feet in diameter, chestnut trees 200 feet tall."


Ancient forest found in Hungary BBC - August 12, 2007
An ancient forest of cypress trees, estimated to be eight million years old, has been discovered in Hungary. Archaeologists found the 16 preserved trunks in an open cast coal mine in the north-eastern city of Bukkabrany. The specimens were preserved intact while most of the forest turned to coal thanks to a casing of sand, which was perhaps the result of a sandstorm. It is hoped the trees may offer experts a valuable insight into Earth's climate eight million years ago. The massive trunks are of a species known as swamp cypresses, which grew for 200-300 years. The wood of the trees is still brown in photographs taken by the archaeologists, giving the impression that it has only just been split. The stumps, 2-3m (10ft) in diameter and 6m (19ft) high, stand uncovered on the lowest level of the mine. However, now that the protective material around them has been stripped there is a danger that the trunks could turn to dust before the scientists' eyes.