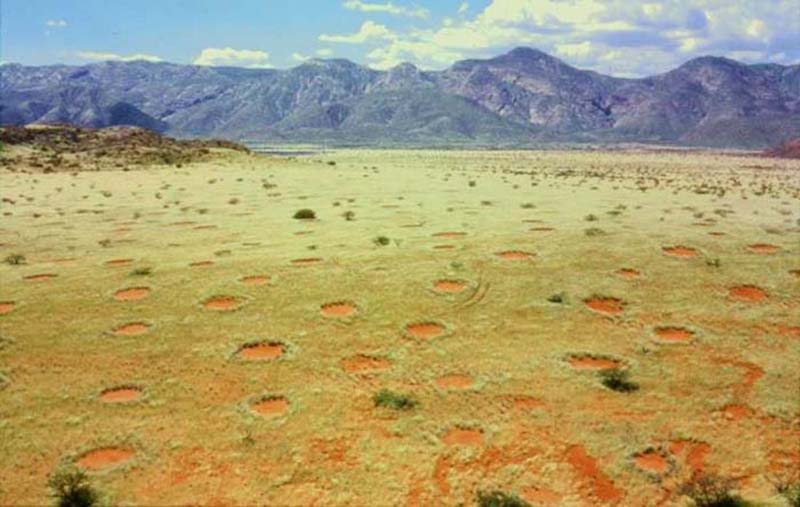 Fairy circles are circular barren patches of land, typically found in the grasslands of the western part of Southern Africa. They are most prolific in Namibia, but are also present in Angola and South Africa. Their diameters vary between 2 and 15 metres (7 and 49 ft), and they occur amidst monospecific grassy vegetation, specifically in Namibia. The circles are to be found in a band about 100 miles (160 km) inland, stretching south from Angola for about 1,500 miles (2,400 km). Located in a remote and inhospitable stretch of land that is over a hundred miles from the nearest village. The circles have been studied since they were reported in 1971.

In the oral myths of the Himba people these barren patches are said to have been caused by the gods, spirits and/or natural divinities. The region's bushmen have traditionally ascribed spiritual and magical powers to them. Of specific beliefs, the Himba people note that their original ancestor, Mukuru was responsible for the creation of the fairy circles, or that they were the footprints of gods. Another myth says that the circles are formed by a dragon in the earth and that its poisonous breath kills the vegetation. Read more ... 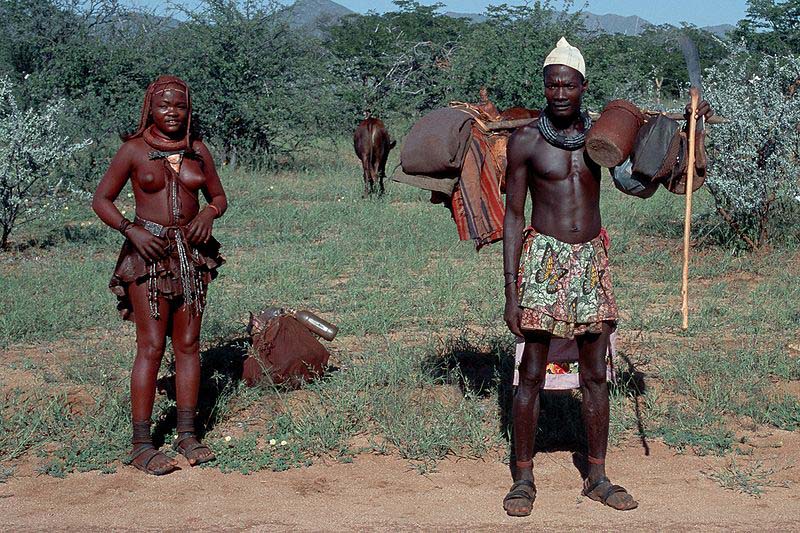 The Himba are indigenous peoples - population about 20,000 to 50,000 - people living in northern Namibia. Himba are mostly a semi-nomadic, pastoral people, closely related to the Herero. Read more ...

Secrets of Namibia's fairy circles demystified: Plants self-organize   PhysOrg - October 20, 2022
Scientists have puzzled over the origin of Namibia's fairy circles for nearly half a century. It boiled down to two main theories: either termites were responsible, or plants were somehow self-organizing. Now, researchers from the University of Gottingen, benefitting from two exceptionally good rainfall seasons in the Namib Desert, show that the grasses within the fairy circles died immediately after rainfall, but termite activity did not cause the bare patches. Instead, continuous soil-moisture measurements demonstrate that the grasses around the circles strongly depleted the water within the circles and thereby likely induced the death of the grasses inside the circles.


Barren Desert 'Fairy Circles' Caused by ... Rain?   Live Science - February 26, 2019
Unusual bare circles in the grasslands of Australia and the Namib Desert called "fairy circles" aren't the work of termites, new research suggests. Fairy circles are a long-standing mystery. Some scientists have argued that they mark termite nests or are the result of plants competing for scarce resources. Some say that a combination of termite and plant activity resulted in the odd splotches. But now, a new study suggests that the circles aren't the result of anything living. Rather, they're a result of weathering caused by heavy rainfall and evaporation. 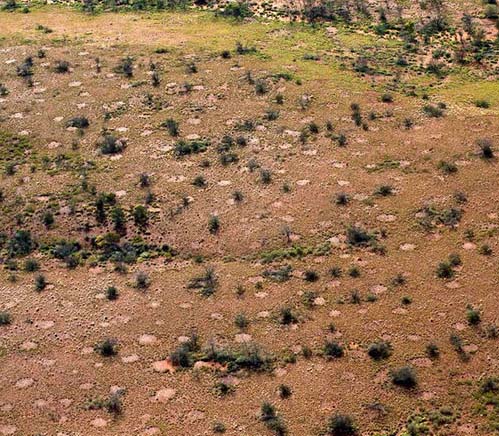 The discovery of fairy circles in Australia earlier this year has hardly put to rest the controversy over how these mysterious structures form. "Fairy circles" are regular, repeating patches of dirt in remote grasslands that, when viewed from above, look like whimsical rings that were scattered across a landscape. Despite their fanciful appearance, the patterns have been a source of serious scientific debate for the last four decades. While some have argued that the geometric patterns are the work of termites, others have postulated that the circles form naturally as vegetation self-organizes in competition for scarce water and other nutrients. Previously, these patches had been observed only in southeastern Africa, mostly Namibia, but in March, a group of researchers announced that they had identified fairy circles in satellite images and during fieldwork in Western Australia. [See Stunning Photos of Fairy Circles in Australia]


Mysterious 'fairy circles' spotted in Australia. How did they get there?   BBC - March 15, 2016
"Fairy circles," the distinctive bald spots dotting the Namibian grasslands, were once mysterious not only for their striking patterns, but their exclusivity: no other landscape in the world seemed to have the same six-sided honeycombs. But more than 6,200 miles away, a new discovery in the Australian outback has helped researchers crack the code, supporting the theory that sparse grasses actually organize themselves into the unusual structures to deal with their dry environment. 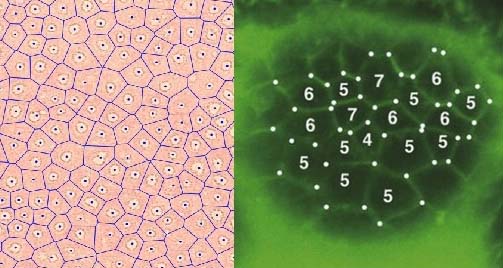 Patterns appearing on both the very large and very small scale are extremely rare. Desert fairy circles are considered one of nature's greatest mysteries because no one knows how they form. Different from mushroom rings, these fairy circles are large barren patches of earth ringed by short grass dotting the desert like craters on the moon or big freckles. Several groups are racing to figure out this bizarre phenomenon. The distribution of fairy circles throughout the desert may look random, but turns out to have a pattern that very closely matches the distribution pattern of skin cells. A pattern spanning such drastically different size scales - microscopic skin cells and the desert landscape - is almost unheard of in nature.


Fairy circles apparently not created by termites after all   PhysOrg - May 21, 2014 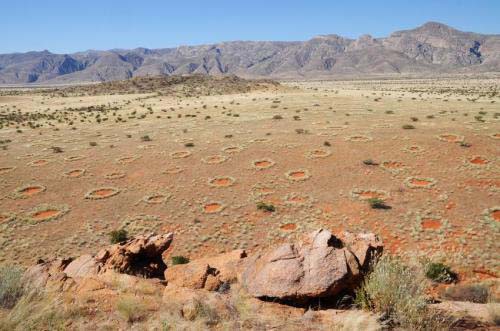 This is an aerial view of the mysterious fairy circles of Namibia. The enigmatic, bare patches within the grassland occur in millions at the transition to the Namib Desert in South Africa. This picture was taken in the Marienfluss Valley, close to one of the study areas for which the scientists have undertaken extensive aerial image analyses. The authors of the study have, for the first time ever, investigated the spatial patterns of the fairy circles in detail. Typical for these patterns are the regularly spaced distances in-between circles at small neighborhood scale while homogeneously spread distribution prevails at large scale level. The scientists conclude from these results to have found strong support for the theory of self-organization, with the remarkable circle patterns emerging as a result of plant competition for water.

There are several theories about the fairy circles, the most popular of which hypothesizes that these mysterious patches are the work of termites, but new evidence discredits that theory. 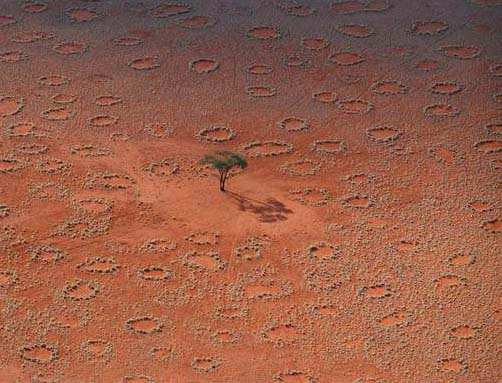 The "artists" behind bizarre, barren, grassless rings dotting the desert of Southwest Africa have been found lurking right at scientists' feet: termites. Known as fairy circles, these patches crop up in regular patterns along a narrow strip of the Namib Desert between mid-Angola and northwestern South Africa, and can persist for decades. The cause of these desert pockmarks has been widely debated, but a species of sand termite, Psammotermes allocerus, could be behind the mysterious dirt rings, suggests a study published today in the journal Science. 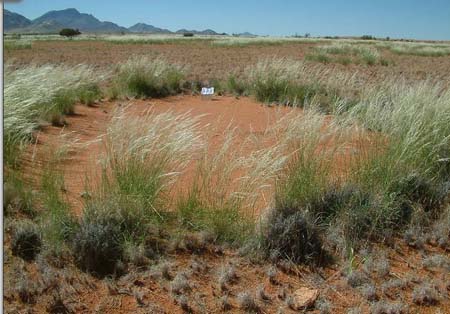 In the sandy desert grasslands of Namibia in southern Africa, mysterious bare spots known as "fairy circles" will form and then disappear years later for no reason anyone can determine. A new look at these strange patterns doesn't solve the wistful mystery but at least reveals that the largest of the circles can linger for a lifetime. Small fairy circles stick around an average of 24 years, while larger ones can exist as long as 75 years. The study sheds little light on why the circles form, persist and then vanish into the landscape after decades.