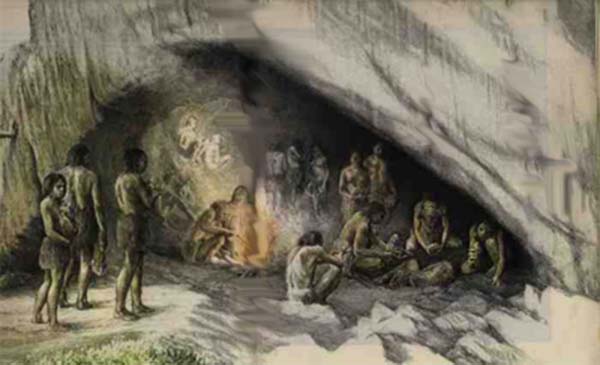 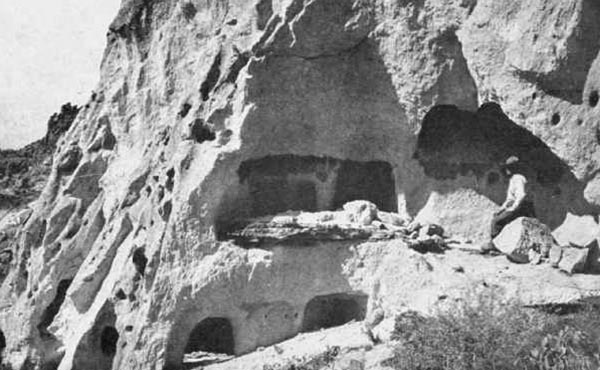 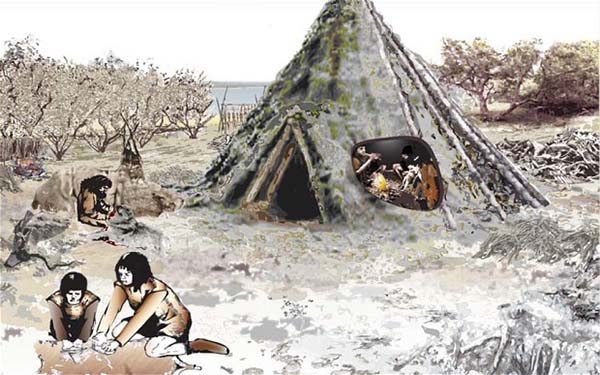 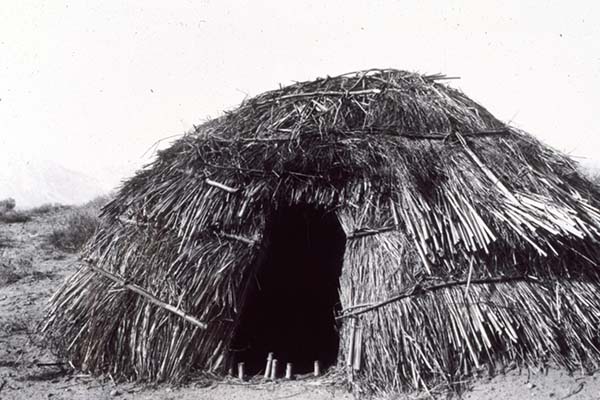 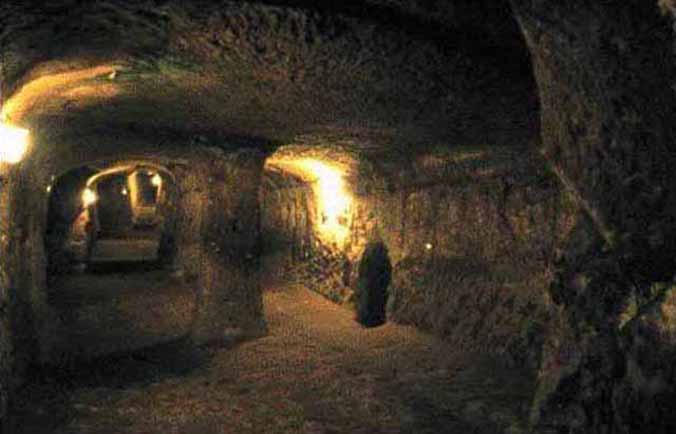 Rock shelter used by speedy early Australians   BBC - November 3, 2016
The speed at which the first Aboriginal settlers spread across Australia has been underlined by the discovery of an ancient rock shelter north of Adelaide. The rock fissure in the Flinders Ranges contains tools and other artifacts that date back to around 49,000 years ago. That means Aboriginal people must have colonized large parts of the continent within a few millennia of their arrival. Dating of the sediments and objects in the cave, which include not just tools, but animal bones, charcoal, ash, egg shells and plant material, reveal that humans were using the site in sporadic fashion over thousands of years. The research team sees periods of frequent use interspersed with what may have been times of abandonment. But what was left on the ground is certainly a boon now to those trying to piece together the chronology and scope of Aboriginal settlement, which likely started in the northwest of the continent more than 50,000 years ago.


Archaeologists discover Britain's 'oldest house'   BBC - August 11, 2010
Archaeologists are claiming to have discovered the oldest house in Britain. The circular structure, found at a site near Scarborough, North Yorkshire, has been dated as being made in 8,500 BC. Described as a "sensational discovery" by archaeologists, this is 500 years earlier than the previous oldest house. The teams from the universities of Manchester and York are also examining a nearby wooden platform, which is being claimed as the oldest example of carpentry in Europe. Nicky Milner, an archaeologist from the University York, says such sites are "incredibly rare" - and that finding such early evidence of settled living gives a new insight into hunter gatherers.


World's oldest building discovered   BBC - March 1, 2000
Previous oldest hut was found in France Japanese archaeologists have uncovered the remains of what is believed to be the world's oldest artificial structure, on a hillside at Chichibu, north of Tokyo. The shelter would have been built by an ancient ancestor of humans, Homo erectus, who is known to have used stone tools. The site has been dated to half a million years ago, according to a report in New Scientist. It consists of what appear to be 10 post holes, forming two irregular pentagons which may be the remains of two huts. Thirty stone tools were also found scattered around the site.

Archaeologists have discovered the remains of what they believe to be Japan's oldest human habitation in a layer of earth about 600,000 years old in Kamitakamori, Miyagi Prefecture. The archaeologists -- from the Tohoku Paleolithic Institute, Tohoku Fukushi University and other institutes -- said Monday they believe that the finding may be one of the oldest in the world.

There are only a few remains of human dwelling structures from the Early Paleolithic period in the world, as early humans such as the Peking Man lived in caves. Similar remains found in Germany are believed to be 400,000 years old. At the site, the archaeologists found several pits into which the pillars for two buildings were likely placed, the archaeologist said.

The latest finding predates by 100,000 years one in Chichibu, Saitama Prefecture, that had been considered the country's oldest. Hiroshi Kajiwara, professor of archaeology at Tohoku Fukushi University, said: "The pits may be similar to the ones in Chichibu. We would like to investigate the findings carefully." The archaeologists found five pits at one location and eight pits at another.

The site with five pits, which measure 15 cm to 20 cm in diameter, showed evidence of a round building measuring 2 meters in diameter, they said. The other site, located 5 meters east, had eight pits measuring 20 cm to 30 cm in diameter, which surrounded a hole in the center. The hole contained seven stone tools. The dwellings are believed to have been built by primitive man, or Homo erectus, who appeared some 1.6 million years ago and likely reached Japan 600,000 years ago at the latest, according to the archaeologists. The buildings could have been used as a place to rest, a lookout for hunting, a place to store hunting tools or to conduct religious rites, researchers said.


Some of the Earliest Homes are discovered in Israel's Jordan Valley

A major archaeological discovery emerged from the Sea of Galilee recently as sea-level fell in the wake of a brutal drought. The receding water revealed the well-preserved remains of the oldest brush huts ever found. The rudimentary homes are 19,400 years old. The prehistoric campsite in Israel's Jordan Valley contained the dirt-packed foundations of six huts, a grave, several hearths, and an area believed to have been used as a garbage dump. Preservation, because it was submerged under water for millennia, was incredible considering its age, said archaeologist Dani Nadel of the University of Haifa.

Radiocarbon dating shows the huts to be among the oldest surviving structures in the world. The floor of one hut yielded a unique array of artifacts, including chipped stone tools, animal bones, and burned fruit and seeds. Excavations near another of the structures revealed the grave of an adult male who was buried with a carved gazelle bone.

The largest hut, an oval some four meters (13 feet) on its long axis, apparently consisted of thick oak branches covered with grass and leaves. No postholes were found. "For the first time," Nadel said, "we have artifacts that tell us about the daily indoor activities of the people that lived here 19,000 years ago."

Early humans may have developed a fondness for oysters on the half shell, say scientists studying stone tools found within fossil reefs near Africa's Red Sea coast. The stone tools, dated to approximately 125,000 years ago, are the earliest evidence of hominids living in a coastal environment and indicate a significant change in early human behavior that helped our ancestors adapt to a changing climate, according to a report in this weekęs Nature.

Although the remains of the toolmakers living on the coast in East Africa have not yet been recovered, the date coincides with the apparent transition from archaic to modern Homo sapiens based on available fossil evidence from other sites in East and South Africa, said project director Robert Walter, a geology professor at the Center of Scientific Investigation for Graduate Education in Ensenada, Mexico. Without bones, researchers canęt be 100 percent sure who made the stone tools, Walter said, but based on fossil remains from that same time, the tool users were anatomically close to modern Homo sapiens, if not fully modern.

Severe climate changes during the last interglacial period may have been enough to push early humans from previously stable interior habitats near the East African Rift Valley to new areas on the coast where they would have found an abundance of edible marine life, Walter said.

Stone tools and fossil remains of anatomically modern humans previously found at Klasies River Mouth and Haroldęs Bay in South Africa indicated a human adaptation to marine environments by 115,000 years ago. The Eritrean tools - handaxes and obsidian blades - indicate that learning to live off the seaęs bounty was a widespread strategy that started 125,000 years ago, and spread from the northeast coast of Africa down to the southern tip.

For proponents of an African origin of modern humans 200,000 to 100,000 years ago, these Paleolithic artifacts open up the possibility that early humans migrated from Africa into Eurasia and Australia by expanding slowly along the coasts of the continents. During periods of low sea levels, these populations could have moved quite quickly, said Chris Stringer of the Natural History Museum, London.

An alternate theory for the geographic origin of modern humans - the multiregional hypothesis - contends that we evolved separately in Europe, Asia and Africa between 100,000 and 40,000 years ago. Paleontological finds, such as the Eritrean tools, combined with further archaeological and biological evidence are necessary to solve the mystery of modern human origins.

Traces of the oldest manmade shelter in sub-Saharan African, built by Stone Age hunters at least 10,000 years ago, have been found in northern South Africa, an archaeologist reported today. Nomadic bushmen used the shelter, located in a field amid waist-high grasses about a half-mile from a river, to hunt game, archaeologist Revil Mason said as the discovery.

Evidence of Stone Age man--tools, traces of fires, gnawed animal bones-- have been found in caves. But this is the first discovery in sub-Saharan Africa of a shelter that Stone Age man actually built himself, said Mason, the retired head of the archaeology research unit at Witwatersrand University in Johannesburg.

The discovery is significant because it helps researchers understand what structures of the period looked like, said Rick Potts, director of the Human Origins Program at the Smithsonian Institution in Washington. A Home Base "The search for a home base in the archaeological record has one of the most important issues in the archaeology of human beings," Potts said in a telephone interview. Potts confirmed that if the remains of the structure are 10,000-15,000 years old, it would be the oldest found in sub-Saharan Africa.

At the site, north of Johannesburg in South Africa's Silicon Valley, the only remaining evidence of the shelter itself were watermelon-sized boulders found in a semi-circle. Mason said the hunters carried the boulders from a field about 100 yards away. Then they probably wedged limbs cut from saplings into the earth and anchored them with the boulders, bending the branches toward the center and lashing their ends together overhead to form a roof. All around the site are primitive stone knives and adzes.

A road crew in southern France on Friday stumbled across a prehistoric cave bearing ancient human skeletons and artifacts. Two workers were clearing the way for the construction of a new highway connecting the cities of Millau and Beziers in the Languedoc region when they discovered the cave Friday about 25 miles west of Montpellie. Skeletons of three adults and a child were preserved in the cave as well as cooking pots, an ax and a vase, which could date from the Neolithic era, 8,000 to 3,500 B.C. The area has been sealed off and work stopped on that part of the new highway. The nation's most famous prehistoric cave is Lascaux in the Dordogne region in south-central France, where magnificent paintings of animals have been preserved.