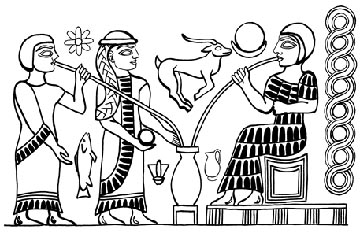 Purposeful production of alcoholic beverages is common in many cultures and often reflects their cultural and religious peculiarities as much as their geographical and sociological conditions. Discovery of late Stone Age jugs suggest that intentionally fermented beverages existed at least as early as the Neolithic period (cir. 10,000 BC).

Wine's first appearance dates from 6000 BC in Georgia. Evidence of alcoholic beverages has also been found dating from 3150 BC in ancient Egypt,[8] 3000 BC in Babylon,[9] 2000 BC in pre-Hispanic Mexico, and 1500 BC in Sudan. Recipes have been found on clay tablets and art in Mesopotamia that show people using straws to drink beer from large vats and pots. The Hindu ayurvedic texts describe both the beneficial effects of alcoholic beverages and the consequences of intoxication and alcoholic diseases.

The medicinal use of alcohol was mentioned in Sumerian and Egyptian texts dating from about 2100 BC. The Hebrew Bible recommends giving alcoholic drinks to those who are dying or depressed, so that they can forget their misery (Proverbs 31:6-7). Read more ...

Traces of the World's First 'Microbrew' Found in a Cave in Israel   Live Science - September 21, 2018
The world's oldest beer may have been brewed for a funeral 13,000 years ago. At a graveyard cave in Israel, archaeologists discovered traces of mashed wheat and barley lining pits carved into the bedrock. The researchers interpreted these residues as leftovers from beer brewing, perhaps part of a funerary feast.


Students recreate 5,000-year-old Chinese beer recipe   PhysOrg - February 9, 2017
A collection of plastic-covered glass beakers and water bottles filled with yellow, foamy liquid stood in front of them on the table, at the end of which sat Li Liu, a professor in Chinese archaeology at Stanford. White mold-like layers floated on top of the liquids. As the students removed the plastic covers, they crinkled their noses at the smell and sour taste of the odd-looking concoctions, which were the results of their final project for Liu's course Archaeology of Food: Production, Consumption and Ritual.


Egyptians Brewed Beer in Tel Aviv 5,000 Years Ago   Live Science - March 30, 2015
Tel Aviv's reputation as a party city for expats might have started 5,000 years ago. During the Bronze Age, Egyptians were making beer in what is today downtown Tel Aviv, new archaeological evidence suggests. When archaeologists were conducting salvage excavations ahead of construction on new office buildings along Hamasger Street, they found 17 ancient pits that were used to store produce. These pits held Egyptian-style pottery that dated back to the Early Bronze Age I, a period that lasted from 3500 B.C. to 3000 B.C.


Origins of Inebriation Revealed   Live Science - May 27, 2014
In prehistoric Eurasia, drugs and alcohol were originally reserved for ritual ceremonies, and weren't used merely to satisfy hedonistic motives, a new study suggests. What's more, given the sacred role of the substances, their use was likely highly regulated and only available to elite citizens. Many Eurasian cultures are known to have an ancient history with psychoactive substances, as evidenced by early written documents. The Greek historian Herodotus, for example, once described the Scythians' (Iranian equestrian tribes) post-funeral purification ceremony involving hemp, which dates back to the fifth century B.C. But written records aren't the only indication of early drug and alcohol use.


Iron-Age brewing evidence found in southeastern France   BBC - June 15, 2011
Archaeologists have uncovered evidence that the occupants of southeastern France were brewing beer during the Iron Age, some 2,500 years ago. A paper in Human Ecology outlines the discovery of barley grains that had been sprouted in a process known as malting; an oven found nearby may have been used to regulate the process. Beer brewing's heritage stretches back to the Bronze Age in China and the Middle East, but this is the earliest sign of the practice in France, where wine-making had already taken hold. The recent find was in Roquepertuse, close to modern Aix-en-Provence, and was excavated in the 1990