Cryonics is the practice of preserving organisms by storing them at cryogenic temperatures where metabolism and decay are almost completely stopped. Viruses, bacteria, sperm/eggs, embryos at early stages of development, insects, and even small animals (small frogs, some fish) can be cryogenically frozen, preserved for an indefinite time (as long as low temperature is maintained) and then thawed and returned to a living state. Large animals or organs (a few centimeters and larger) can not be safely frozen because removing heat via thick tissue by natural thermoconductivity becomes so slow that ice microcrystals grow big enough to damage cell membranes.

An organism held in such a state (either frozen or vitrified) is said to be cryopreserved. Barring social disruptions, cryonicists believe that a perfectly vitrified person can be expected to remain physically viable for at least 30,000 years, after which time cosmic ray damage is thought to be irreparable. Many scientists in the field, most notably Ralph Merkle and Brian Wowk, hold that molecular nanotechnology has the potential to extend even this limit many times over.

To its detractors, the justification for cryonics is unclear, given the primitive state of preservation technology. Advocates counter that even a slim chance of revival is better than no chance. In the future, they speculate, not only will conventional health services be improved, but they will also quite likely have expanded even to the conquering of old age itself (see links at the bottom). Therefore, if one could preserve one's body (or at least the contents of one's mind) for, say, another hundred years, one might well be resuscitated and live indefinitely long. But critics of the field contend that, while an interesting technical idea, cryonics is currently little more than a pipedream, that current "patients" will never be successfully revived, and that decades of research, at least, must occur before cryonics is to be a legitimate field with any hope of success.

Probably the most famous cryopreserved patient is Ted Williams. The popular urban legend that Walt Disney was cryopreserved is false; he was cremated, and interred at Forest Lawn Memorial Park Cemetery. Robert Heinlein, who wrote enthusiastically of the concept, was cremated and his ashes distributed over the Pacific Ocean. Timothy Leary was a long-time cryonics advocate, and signed up with a major cryonics provider. He changed his mind, however, shortly before his death, and so was not cryopreserved.

A cryopreserved person is sometimes called a corpsicle (a portmanteau of "corpse" and "popsicle"). This term was first used by science fiction author Larry Niven, who credits its formulation to Frederick Pohl.

Cryonics has traditionally been dismissed by mainstream cryobiology, of which it is arguably a part. The reason generally given for this dismissal is that the freezing process creates ice crystals, which damage cells and cellular structures - a condition sometimes called "whole body freezer burn" - so as to render any future repair impossible. Cryonicists have long argued, however, that the extent of this damage was greatly exaggerated by the critics, presuming that some reasonable attempt is made to perfuse the body with cryoprotectant chemicals (traditionally glycerol) that inhibit ice crystal formation.

According to cryonicists, however, the freezer burn objection became moot around the turn of the millennium, when cryobiologists Greg Fahy and Brian Wowk, of Twenty-First Century Medicine developed major improvements in cryopreservation technology, including new cryoprotectants and new cryoprotectant solutions, that greatly improved the feasibility of eliminating ice crystal formation entirely, allowing vitrification (preservation in a glassy rather than frozen state). In a glass, the molecules do not rearrange themselves into grainy ice crystals as the solution cools, but instead become locked together while still randomly arranged as in a fluid, forming a "solid liquid" as the temperature falls below the glass transition temperature. Alcor Life Extension Foundation, the world's largest cryonics provider, has since been using these cryoprotectants, along with a new, faster cooling method, to vitrify whole human brains. They continue to use the less effective glycerol-based freezing for patients who opt to have their whole bodies preserved, since vitrification of an entire body is beyond current technical capabilities. The only other full-service cryonics provider in the world, the Cryonics Institute, is currently testing its own vitrification solution.

Current solutions being used for vitrification are stable enough to avoid crystallization even when a vitrified brain is warmed up. This has recently allowed brains to be vitrified, warmed back up, and examined for ice damage using light and electron microscopy. No ice crystal damage was found. However, if the circulation of the brain is compromised, protective chemicals may not be able to reach all parts of the brain, and freezing may occur either during cooling or during warming. Cryonicists argue, however, that injury caused during cooling can be repaired before the vitrified brain is warmed back up, and that damage during rewarming can be prevented by adding more cryoprotectant in the solid state, or by improving rewarming methods.

Some critics have speculated that because a cryonics patient has been declared legally dead, their organs are dead, and thus unable to allow cryoprotectants to reach the majority of cells. Cryonicists respond that it has been empirically demonstrated that, so long as the cryopreservation process begins immediately after legal death is declared, the individual organs (and perhaps even the patient as a whole) remain biologically alive, and vitrification (particularly of the brain) is quite feasible.

Critics have often quipped that it is easier to revive a corpse than a cryonicaly frozen body. Many cryonicists might actually agree with this, provided that the "corpse" were fresh, but they would argue that such a "corpse" may actually be biologically alive, under optimal conditions. A declaration of legal death does not mean that life has suddenly ended - death is a gradual process, not a sudden event. Rather, legal death is a declaration by medical personnel that there is nothing more they can do to save the patient. But if the body is clearly biologically dead, having been sitting at room temperature for a period of time, or having been traditionally embalmed, then cryonicists would hold that such a body is far less revivable than a cryonicay preserved patient, since any process of resuscitation will depend on the quality of the structural and molecular preservation of the brain, which is largely destroyed by ischemic damage (from lack of blood flow) within minutes or hours of cardiac arrest, if the body is left to sit at room temperature. Traditional embalming also largely destroys this crucial neurological structure.

Cryonicists would also point out that the definitions of "death" and "corpse" currently in use may change with future medical advances, just as they have changed in the past, and so they generally reject the idea that they are trying to "raise the dead," viewing their procedures instead as highly experimental medical procedures, whose efficacy is yet to be either demonstrated or refuted. Some also suggest that if technology is developed that allows mind transfer, revival of the frozen brain might not even be required; the mind of the patient could instead be "uploaded" into an entirely new substrate. The current state of neuro-electrical technology does provide limited control of a computer through neuro-electrical stimulus.

The biggest drawback to current vitrification practice is a costs issue. Alcor is currently developing such a storage system. Alcor believes, however, that even before such a storage system is developed, the current vitrification method is far superior to traditional glycerol-based freezing, since the fractures are very clean breaks that occur even with traditional glycerol cryoprotection, and the loss of neurological structure is still less than that caused by ice formation, by orders of magnitude.

While cryopreservation arrangements can be expensive (currently ranging from $28,000 to $150,000), most cryonicists pay for it with life insurance. The elderly, and others who may be uninsurable for health reasons, will often pay for the procedure through their estate. Others simply invest their money over a period of years, accepting the risk that they might die in the meantime. All in all, cryonics is actually quite affordable for the vast majority of those in the industrialized world who really want it, especially if they make arrangements while still young.

Even assuming perfect cryopreservation techniques, many cryonicists would still regard eventual revival as a long shot. In addition to the many technical hurdles that remain, the likelihood of obtaining a good cryopreservation is not very high because of logistical problems. The likelihood of the continuity of cryonics organizations as businesses, and the threat of legislative interference in the practice, don't help the odds either. Most cryonicists, therefore, regard their cryopreservation arrangements as a kind of medical insurance - not certain to keep them alive, but better than no chance at all and still a rational gamble to take.

During the 1980s, the problems associated with crystallization were becoming better appreciated, and the emphasis shifted from whole body to brain-only or "neuropreservation", on the assumption that the rest of the body could be regrown, perhaps by cloning of the person's DNA or by using embryonic stem cell technology. The main goal now seems to be to preserve the information contained in the structure of the brain, on which memory and personal identity depends.

Available scientific and medical evidence suggests that the mechanical structure of the brain is wholly responsible for personal identity and memories (for instance, spinal cord injury victims, organ transplant patients, and amputees appear to retain their personal identity and memories). Damage caused by freezing and fracturing is thought to be potentially repairable in the future, using nanotechnology, which will enable the manipulation of matter at the molecular level.

To critics, this appears a kind of futuristic deus ex machina, but while the engineering details remain speculative, the rapidity of scientific advances over the past century, and more recently in the field of nanotechnology itself, suggest to some that there may be no insurmountable problems. And the cryopreserved patient can wait a long time. With the advent of vitrification, the importance of nanotechnology to the cryonics movement may begin to decrease.

Some critics, and even some cryonicists, question this emphasis on the brain, arguing that during neuropreservation some information about the body's phenotype will be lost and the new body may feel "unwanted," and that in case of brain damage the body may serve as a crude backup, helping restore indirectly some of the memories. Partly for this reason, the Cryonics Institute preserves only whole bodies. Some proponents of neuropreservation agree with these concerns, but still feel that lower costs and better brain preservation justify preserving only the brain.

Historically, cryonics began in 1962 with the publication of The Prospect of Immortality by Robert Ettinger. In the 1970s, the damage caused by crystallization was not well understood. Two early organizations went bankrupt, allowing their patients to thaw out, bringing the matter to the public eye, at which point the problem with cellular damage became more well known and the practice gained something of the reputation of a scam. During the 1980s, the extent of the damage from the freezing process became much clearer and better known, and the emphasis of the movement began to shift from whole-body to neuropreservation. 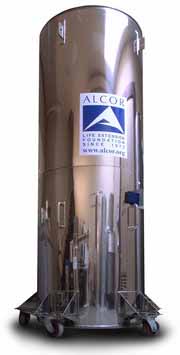 Alcor currently preserves about 60 human bodies and heads in Scottsdale, Arizona. Before the company moved to Arizona from Riverside, California in 1994, it was the center of several controversies, including a county coroner's ruling that a client was murdered with barbiturates by the company's staff, prior to her neuropreservation. Alcor contended that the drug was administered after her death. No charges were ever filed. Wikipedia