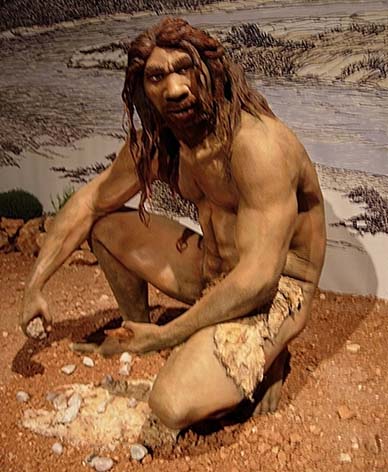 The development of textile and clothing manufacture in prehistory has been the subject of a number of scholarly studies since the late 20th century. These sources have helped to provide a coherent history of these prehistoric developments. Evidence suggests that human beings may have begun wearing clothing as far back as 100,000 to 500,000 years ago. Read more ... 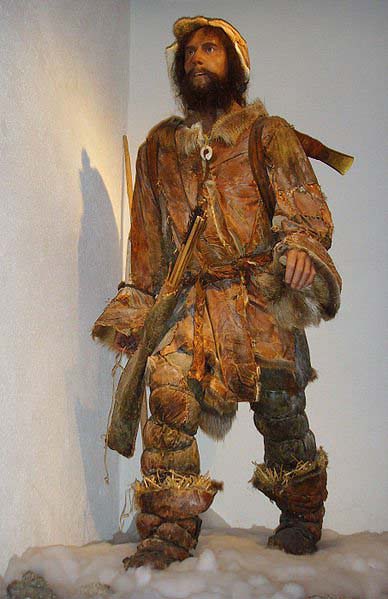 Clothing has come a long way from animal skins laced together to today's fashions that change from year to year yet seem to recycle through time. The fashion industry is always in the news showing us the latest trends season to season. Look at Neanderthal's boots. Do they remind you of today's Uggs?


First Shoes Worn 40,000 Years Ago   Live Science - June 7, 2008
Humans started wearing shoes about 40,000 years ago, much earlier than previously thought, new anthropological research suggests. As any good clothes horse knows, the right outfit speaks volumes about the person wearing it. Now, anthropologists are tapping into that knowledge base, looking for the physical changes caused by wearing shoes to figure out when footwear first became fashionable. Turns out, clothes really do make the man (and the woman), at least when it comes to feet. That's because wearing shoes changes the way humans walk and how their bodies distribute weight. If you wear shoes regularly, as most modern humans do, those changes end up reflected in your bones and ligaments.


Bones reveal first shoe-wearers   BBC - August 24, 2005
Sturdy shoes first came into widespread use between 40,000 and 26,000 years ago, according to a US scientist. Humans' small toes became weaker during this time, says physical anthropologist Erik Trinkaus, who has studied scores of early human foot bones. He attributes this anatomical change to the invention of rugged shoes, that reduced our need for strong, flexible toes to grip and balance. The development of footwear appears to have affected the four so-called "lesser" toes - excepting the big toe. While early humans living in cold northern climates may have begun covering up their feet to insulate them as early as 500,000 years ago, protective footwear comparable to modern-day shoes is thought to be a much later innovation. It has been difficult for archaeologists to determine exactly when humans stopped going barefoot, however, because the plant and animal materials used to make prehistoric shoes is highly perishable.


Woven cloth dates back 27,000 years   BBC - June 14, 2000
Woven clothing was being produced on looms 27,000 years ago, far earlier than had been thought, scientists say. It had been thought that the first farmers developed weaving 5,000 to 10,000 years ago. But Professor Olga Soffer, of the University of Illinois, is about to publish details in the journal Current Anthropology of 90 fragments of clay that have impressions from woven fibres. Professor Soffer revealed some her findings recently when she said that a 25,000-year-old figurine was wearing a woven hat. If confirmed, her work could change our understanding of distant ancestors, the so-called Ice Age hunters of the Upper Palaeolithic Stone Age.

Archaeologists have discovered what the well-dressed Ice Age woman wore on ritual occasions. Her outfit, however, including accessories, doesn't resemble anything Wilma Flintstone ever wore, or, for that matter, any of our carved-in-stone conceptions of "paleofashion."

Instead, the threads of at least some Ice Age women included caps or snoods, belts and skirts, bandeaux (banding over the breasts) and bracelets and necklaces -- all constructed of plant fibers in a great variety of cloth, from twined and basket wear to plain weaves. While styling varied across Eurasia, the finest weaves are "comparable to not only Neolithic but even later Bronze and Iron Age products, or, in fact, to thin cotton and linenwear worn today," Olga Soffer, James Adovasio and David Hyland wrote in an article to be published in Current Anthropology.

The evidence for Ice Age summer fashions comes in part from 80 textile impressions Soffer found on tiny clay fragments in the Czech Republic. The impressions are "the earliest evidence for cordage and textile production in the world and reflect technologies heretofore associated with much later periods," the archaeologists wrote.

Soffer, a professor of anthropology at the University of Illinois and a pioneer in the study of Upper Paleolithic life ways, compared the impressions to the representation of clothing on the so-called "Venus" figurines, which also date to the Gravettian period, roughly 25,000 years ago.

"It suddenly struck us that what we were looking at under the microscope on these little fragments was precisely what was being shown as clothing on some of these 'naked ladies,' " she said, noting that in all likelihood the Ice Age seamstresses also carved the figurines that showed off their "exquisitely detailed" weaving, plaiting and coiling skills.

Among other things, the findings "get our ancestors out of the smelly furs and hides that they've been dressed in in our imagination, and into fine woven clothing -- at least in warm-weather months," said Soffer, lead researcher in the study of women's wear "B.V." = "Before Vogue," as she likes to say.

The new research also provides a new way of thinking about our ancestors, Soffer argues. Up to now we have had "a monotonous image of our deep past," she said, which consists of hide- and fur-wrapped "brave men with lances going after mammoths." But these are the activities of a minority of the population. "Where were the women and children?" Soffer asks. "Where are the old people and the infirm, and what are they doing? Surely a lot more than simply sitting around admiring their brave heroes."

Indeed, the new analysis sheds light on the major role that some women played in late Pleistocene societies. The women who turned out such fine garments, the archaeologists hypothesize, probably enjoyed high status in the society, their wear considered items of great value.