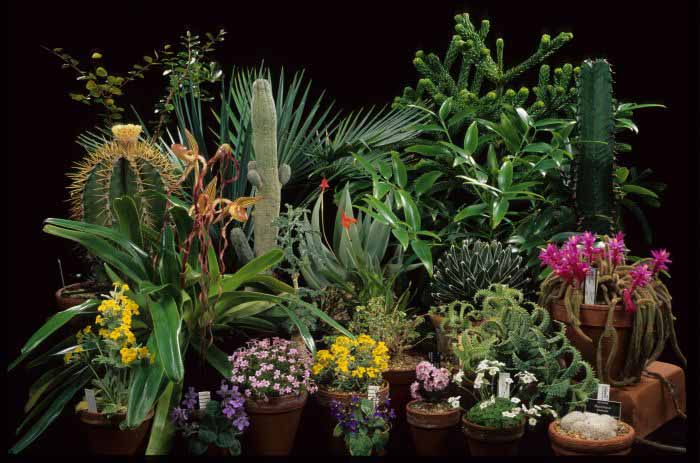 Botany is the branch of biology that deals with plants. It involves the study of the structure, properties, and biochemical processes of all forms of plant life, including trees. As a branch of biology, it is also sometimes referred to as plant science(s) or plant biology. Botany covers a wide range of scientific disciplines that study the growth, reproduction, metabolism, development, diseases, and evolution of plants.

Also included within its scope are plant classification and the study of plant diseases and of the interactions of plants with their physical environment. Over the years various specialized branches of botany have developed, and the principles and findings of botany, moreover, have provided the base on which depend such applied plant sciences as agriculture, horticulture, and forestry.

Botany originated as Herbalism, the study and use of plants for their medicinal properties. The early recorded history of botany includes many ancient writings and plant classifications. Examples of early botanical works have been found in ancient sacred texts from India dating back to before 1100 BC, archaic Avestan writings, and works from China before it was unified in 221 BC.

Modern botany traces its roots back to Ancient Greece, specifically to Theophrastus (c. 371Đ287 BC), a student of Aristotle who invented and described many of its principles and is widely regarded in the scientific community as the "Father of Botany".His major works, Enquiry into Plants and On the Causes of Plants, constitute the most important contributions to botanical science until the Middle Ages, almost seventeen centuries after they were written.

These professionals, in seeking plants useful in medicine, began seriously to observe plants themselves, as reflected in the woodcuts with which their herbal books were illustrated.


In mid-16th century, "botanical gardens" were founded in a number of Italian universities - the Padua botanical garden in 1545 is usually considered to be the first which is still in its original location. These gardens continued the practical value of earlier "physic gardens", often associated with monasteries, in which plants were cultivated for medical use. They supported the growth of botany as an academic subject. Lectures were given about the plants grown in the gardens and their medical uses demonstrated. Botanical gardens came much later to northern Europe; the first in England was the University of Oxford Botanic Garden in 1621. Throughout this period, botany remained firmly subordinate to medicine.

German physician Leonhart Fuchs (1501Đ1566) was one of "the three German fathers of botany", along with theologian Otto Brunfels (1489-1534) and physician Hieronymus Bock (1498-1554) (also called Hieronymus Tragus). Fuchs and Brunfels broke away from the tradition of copying earlier works to make original observations of their own. Bock created his own system of plant classification.

Physician Valerius Cordus (1515Đ1544) authored a botanically and pharmacologically important herbal Historia Plantarum in 1544 and a pharmacopoeia of lasting importance, the Dispensatorium in 1546.[20] Naturalist Conrad von Gesner (1516-1565) and herbalist John Gerard (1545-c. 1611) published herbals covering the medicinal uses of plants. Naturalist Ulisse Aldrovandi (1522-1605) was considered the father of natural history, which included the study of plants. In 1665, using an early microscope, Polymath Robert Hooke discovered cells, a term he coined, in cork, and a short time later in living plant tissue.


In the 17th century, as a result of the earlier revival of learning and of increased facilities for travel and study in Europe and Asia, many more plants became known, and some botanists turned from medical botany to attempts to name and catalog all known kinds of plants.

In the 18th century the greatest figure in botany was the Swedish scientist Carolus Linnaeus. His most valuable and lasting contributions were his careful descriptions of approximately 6,000 species arranged in genera (the same arrangement used today), his collation of the species that he knew with the names and descriptions of previous botanists, and his rules of nomenclature.

He established binomial nomenclature - i.e., the naming of each species by two words, of which the first is the name of the genus to which it belongs and the second is a qualifying word, usually an adjective (e.g., the dog rose is Rosa canina).

Even in this early period, botany was becoming specialized. While many botanists were occupied only with the classes and names of plants, the foundations of anatomy, morphology, and physiology were being laid. The important field of genetics was initiated in the 19th century, principally through the work of the Austrian botanist Gregor Mendel.

Modern botany is a broad, multidisciplinary subject with inputs from most other areas of science and technology. Research topics include the study of plant structure, growth and differentiation, reproduction, biochemistry and primary metabolism, chemical products, development, diseases, evolutionary relationships, systematics, and plant taxonomy. Dominant themes in 21st century plant science are molecular genetics and epigenetics, which are the mechanisms and control of gene expression during differentiation of plant cells and tissues. Botanical research has diverse applications in providing staple foods and textiles, in modern horticulture, agriculture and forestry, plant propagation, breeding and genetic modification, in the synthesis of chemicals and raw materials for construction and energy production, in environmental management, and the maintenance of biodiversity. Read more ... 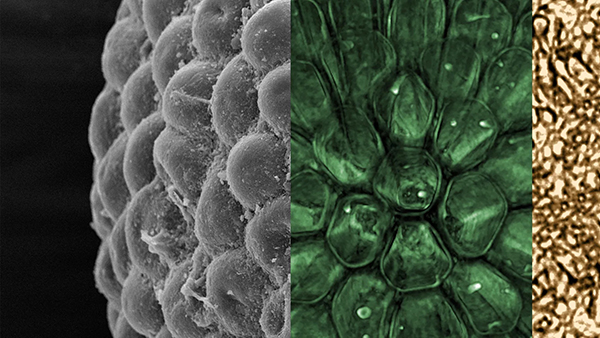 These organisms have survived virtually unchanged through 5 mass extinctions and half a billion years.


The largest known plant on Earth - a seagrass roughly three times the size of Manhattan - has been discovered off the coast of Australia   BBC - June 1, 2022 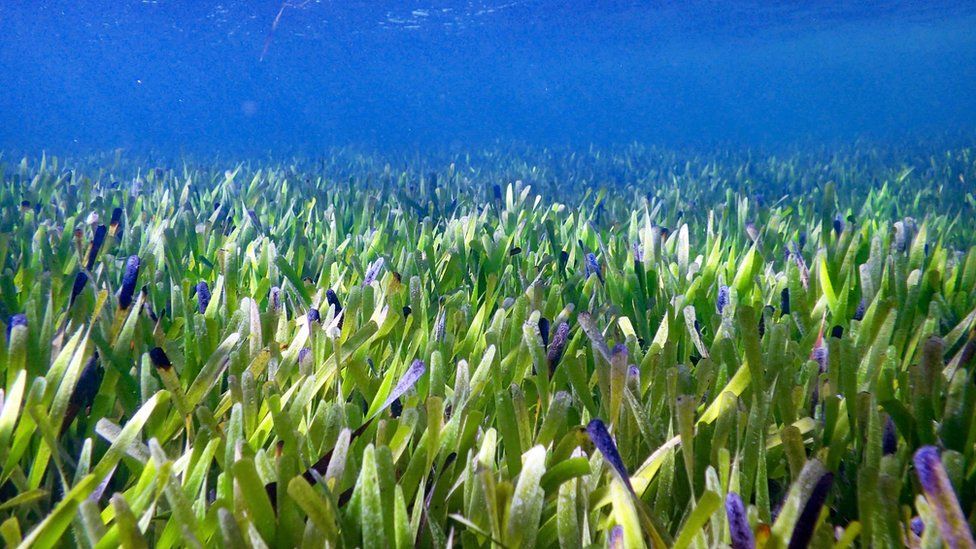 Using genetic testing, scientists have determined a large underwater meadow in Western Australia is in fact one plant. It is believed to have spread from a single seed over at least 4,500 years. The seagrass covers about 200 sq km (77 sq miles), researchers from the University of Western Australia said. The team stumbled upon the discovery by accident at Shark Bay, about 800km (497 miles) north of Perth.


164 million-year-old plant fossil is the oldest example of a flowering bud. The discovery changes what we know about the evolution of flowering plants   Live Science - January 19, 2022
Researchers have uncovered the earliest example of a flower bud in a 164 million-year-old plant fossil in China. The discovery firmly pushes back the emergence of flowering plants into the Jurassic period, between 145 million and 201 million years ago. The fossil, which was uncovered in the Inner Mongolia region of China, is 1.7 inches (4.2 centimeters) long and 0.8 inches (2 cm) wide. It contains a stem, a leafy branch, a bulbous fruit and a tiny flower bud around 3 square millimeters in size. The researchers have named the new species Florigerminis jurassica.


New Evidence Challenges The Idea That Mutations Are Entirely Random   Science Alert - January 13, 2022
It's a common misconception that evolution has a sense of direction Đ a notion that biology nerds around the world are constantly trying to correct. But new research reveals there may be a semblance of truth to this misconception, at least more than we ever realized. While it's not as straightforward as mutation with a purpose, it now appears that not all DNA is equal when it comes to being mutable.


How 'Flower Power' Quite Literally Transformed Earth Millions of Years Ago Creating the world for us to flourish   Science Alert - January 8, 2022
Following the time of the dinosaurs, it might well be that the evolution of flowering plants drove the explosion in the diversity of life on Earth, according to a 2021 paper. Most of the plants we now eat, drink, wear, and build with are of the flowering variety. They're called angiosperms, which roughly translates from Greek as 'seed vessels'.


For The First Time, Researchers Just Watched How Plants Slurp Up Water   Science Alert - August 7, 2021
Plants thirst for water, just as we animals do, but exactly how they slurp it through their tissues has remained a bit of a mystery as attempting to see it happening impairs the process. By applying a gentle imaging technique in a new way physicist Flavius Pascut and the team were able to watch plants' innards at work as they drank in real time.


Scientists Identify New Flower From a Forest That Existed 100 Million Years Ago   Science Alert - December 24, 2020
This strange, extinct flower doesn't just offer clues about the history of floral evolution. According to Poinar Jr., V. pleristaminis and other Burmese amber angiosperm fossils like it may also help to solve an outstanding mystery about the ancient supercontinent Gondwana from which these plants first arose.


Billion-year-old green algae is an ancestor of all plants on Earth   Live Science - February 26, 2020
The oldest green seaweed on record, the ancestor of all land plants, lived about 1 billion years ago, a new study finds. Scientists have discovered the fossils of what may be the oldest green algae ever known. The newfound seaweed - called Proterocladus antiquus - lived about a billion years ago. And even though it was tiny, about 0.07 inches (2 millimeters) in length, the algae had a big role: It could produce oxygen through photosynthesis.


Frozen in time: World's oldest lily found in Brazil grew 115 million years ago and has a fossilized flower and intact cells   Daily Mail - July 12, 2019
The world's oldest preserved lily has been unearthed from a stone quarry in Brazil and dates back to around 115 million years ago. The fossil is exceptionally well-preserved - and includes the plant's roots, a flower and even individual cells. It is though to have originally have grown along the banks of a freshwater lake in what is today the city of Crato in northeastern Brazil.


Earliest records of three plant groups uncovered in the Permian of Jordan   PhysOrg - January 2, 2019
A "hidden cradle of plant evolution" has been uncovered in Jordan. In Permian sedimentary rocks exposed along the east coast of the Dead Sea, a team led by paleobotanists from the University of Mźnster discovered well-preserved fossils of plant groups bearing characteristics typical of younger periods of Earth history. The Permian began some 300 million years ago and ended around 250 million years ago.


Researchers unlock secrets of plant development   PhysOrg - August 23, 2018
Researchers have discovered an internal messaging system that plants use to manage the growth and division of their cells. These growth-management processes are critical for all organisms, because without them, cells can proliferate out of control as they do in cancers and bacterial infections. Plants use this messaging system to survive under harsh conditions or to compete successfully when conditions are favorable. It tells them when to grow, when to stagnate, when to flower, and when to store resources all based on the prevailing conditions. Understanding how it all works could enable innovations in agriculture, forestry and conservation as climate change takes hold.


Stomata - the plant pores that give us life -arise thanks to a gene called MUTE, scientists report   PhysOrg - May 7, 2018
Through photosynthesis, they use sunlight and carbon dioxide to make food, belching out the oxygen that we breathe as a byproduct. This evolutionary innovation is so central to plant identity that nearly all land plants use the same pores - called stomata -to take in carbon dioxide and release oxygen. Stomata are tiny, microscopic and critical for photosynthesis. Thousands of them dot on the surface of the plants. Understanding how stomata form is critical basic information toward understanding how plants grow and produce the biomass upon which we thrive.


Plants colonized the Earth 100 million years earlier than previously thought   PhysOrg - February 20, 2018
For the first four billion years of Earth's history, our planet's continents would have been devoid of all life except microbes. All of this changed with the origin of land plants from their pond scum relatives, greening the continents and creating habitats that animals would later invade. The timing of this episode has previously relied on the oldest fossil plants which are about 420 million years old.