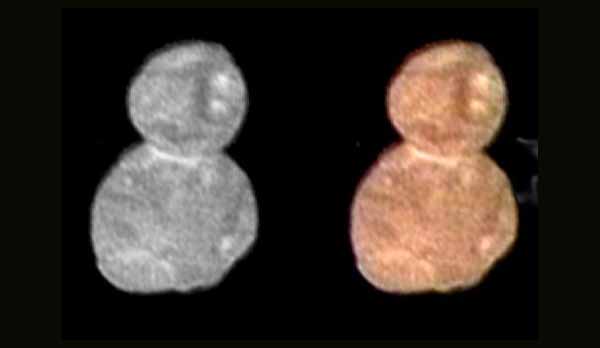 Ultima Thule is a trans-Neptunian object located in the Kuiper belt. It is a contact binary, with estimated dimensions of 31 by 19 km (20 by 10 mi), consisting of a larger body ("Ultima") three times the volume of the smaller ("Thule"). With an orbital period of 298 years and a low inclination and eccentricity, it is classified as a classical Kuiper belt object. Due to its distant location, it is suspected to have not undergone significant gravitational perturbations and to be only moderately cratered. With the New Horizons space probe's flyby on 1 January 2019, 2014 MU69 became the farthest object in the Solar System visited by a spacecraft, and is believed to be the most primitive, both bodies being planetesimal aggregates of much smaller building blocks. It was discovered on June 26, 2014 by astronomers using the Hubble Space Telescope as part of a search for a Kuiper belt object for the New Horizons mission to target in its first extended mission; it was chosen over two other candidates to become the primary target of the mission. Its nickname, a Greco-Latin term for a "place beyond the known world", was chosen as part of a public competition in 2018. Read more 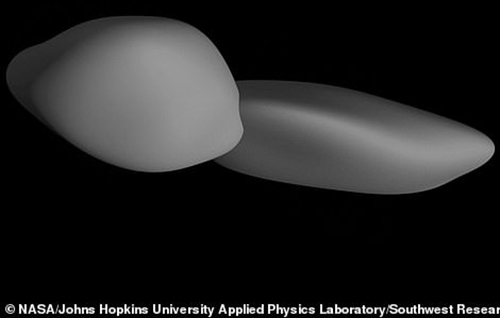 As the world celebrated the start of 2019, scientists with NASA's New Horizons spacecraft partied with them. But the bigger celebration came just over 30 minutes later, when New Horizons made history with the flyby of Ultima Thule, a mysterious object 4.1 billion miles (6.6 billion kilometers) from Earth in the Kuiper Belt, home to frozen relics left over from the birth of the solar system. It's the farthest flyby of an object in our solar system; and the second rendezvous for New Horizons, which visited Pluto in July 2015.


Ultima Thule is really two objects that form a space 'snowman'   CNN - January 3, 2019
NASA revealed clearer images of Ultima Thule, the object at the edge of the solar system that the New Horizons spacecraft took pictures of during its flyby on New Year's Day. Ultima Thule looks just like a red snowman. Studying Ultima Thule is a look back in time because it is part of the Kuiper Belt, which is a remnant of the original disk from which the sun and planets formed.