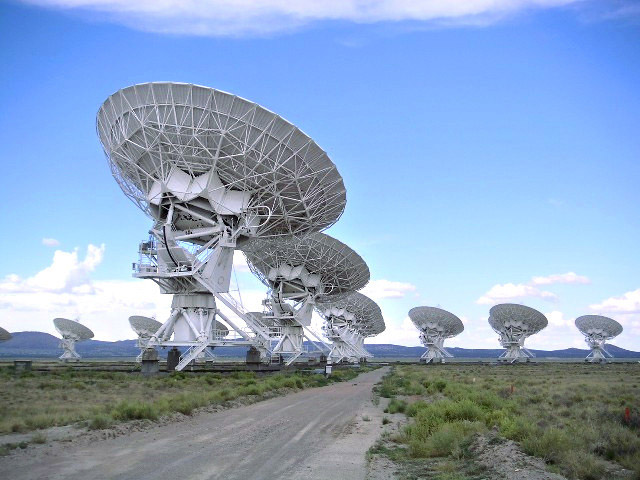 Radio astronomy is a subfield of astronomy that studies celestial objects at radio frequencies. The first detection of radio waves from an astronomical object was in 1933, when Karl Jansky at Bell Telephone Laboratories reported radiation coming from the Milky Way. Subsequent observations have identified a number of different sources of radio emission. These include stars and galaxies, as well as entirely new classes of objects, such as radio galaxies, quasars, pulsars, and masers. The discovery of the cosmic microwave background radiation, regarded as evidence for the Big Bang theory, was made through radio astronomy.

Radio astronomy is conducted using large radio antennas referred to as radio telescopes, that are either used singularly, or with multiple linked telescopes utilizing the techniques of radio interferometry and aperture synthesis. The use of interferometry allows radio astronomy to achieve high angular resolution, as the resolving power of an interferometer is set by the distance between its components, rather than the size of its components. Read more 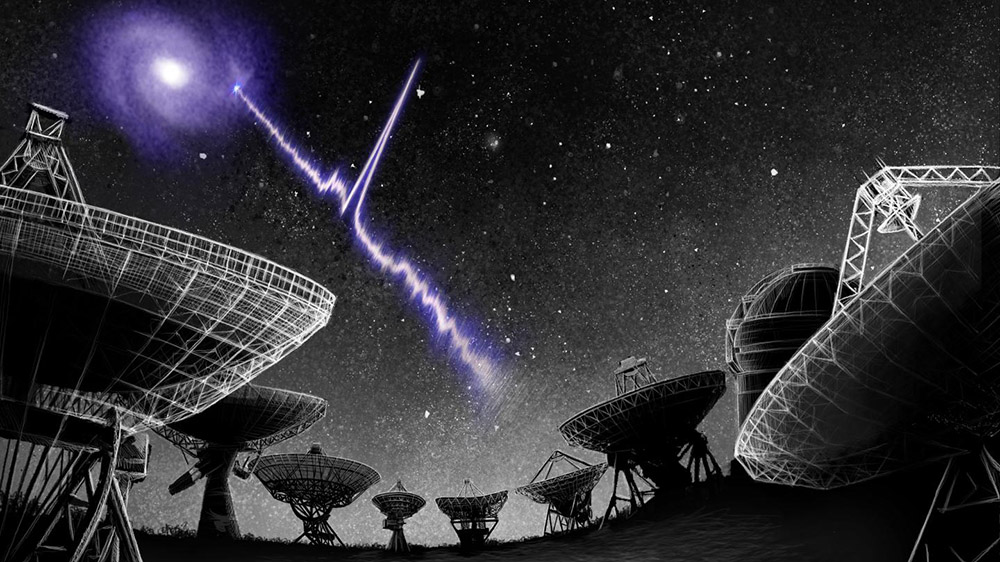 In radio astronomy, a fast radio burst (FRB) is a transient radio pulse of length ranging from a fraction of a millisecond to a few milliseconds, caused by some high-energy astrophysical process not yet understood. Astronomers estimate the average FRB releases as much energy in a millisecond as the Sun puts out in 3 days. While extremely energetic at their source, the strength of the signal reaching Earth has been described as 1,000 times less than from a mobile phone on the Moon.

The first FRB was discovered by Duncan Lorimer and his student David Narkevic in 2007 when they were looking through archival pulsar survey data, and it is therefore commonly referred to as the Lorimer Burst. Many FRBs have since been recorded, including several that have been detected to repeat in seemingly irregular ways. Nonetheless, one FRB has been detected to repeat in a regular way: particularly, FRB 180916 seems to pulse every 16.35 days.

Most FRBs are extragalactic, but the first Milky Way FRB was detected by the CHIME radio telescope in April 2020.

In June 2021, astronomers reported over 500 FRBs from outer space detected.

When the FRBs are polarized, it indicates that they are emitted from a source contained within an extremely powerful magnetic field.The exact origin and cause of the FRBs is still the subject of investigation; proposals for their origin range from a rapidly rotating neutron star and a black hole, to extraterrestrial intelligence.

In 2020, astronomers reported narrowing down the source of fast radio bursts, which may now plausibly include "compact-object mergers and magnetars arising from normal core collapse supernovae".

The localization and characterization in 2012 of FRB 121102, one of the three repeating sources, has improved the understanding of the source class. FRB 121102 is identified with a galaxy at a distance of approximately three billion light-years and is embedded in an extreme environment.

The first host galaxy identified for a non-repeating burst, FRB 180924, was identified in 2019 and is a much larger and more ordinary galaxy, nearly the size of the Milky Way. In August 2019, astronomers reported the detection of eight more repeating FRB signals.

In January 2020, astronomers reported the precise location of a second repeating burst, FRB 180916. One FRB seems to have been in the same location as a known gamma-ray burst.

On 28 April 2020, a pair of millisecond-timescale bursts (FRB 200428) consistent with observed fast radio bursts, with a fluence of >1.5 million Jy ms, was detected from the same area of sky as the magnetar SGR 1935+2154. Although it was thousands of times less intrinsically bright than previously observed fast radio bursts, its comparative proximity rendered it the most powerful fast radio burst yet observed, reaching a peak flux of either a few thousand or several hundred thousand janskys, comparable to the brightness of the radio sources Cassiopeia A and Cygnus A at the same frequencies. This established magnetars as, at least, one ultimate source of fast radio bursts, although the exact cause remains unknown. Further studies support the notion that magnetars may be closely associated with FRBs.

On October 13, 2021, astronomers reported the detection of hundreds of FRBs from a single system

A Bizarre Radio Signal From Deep Space Has Been Detected Beating Like a Heart   Science Alert - July 13, 2022

A new radio signal from deep space is once again challenging our understanding of these mysterious phenomena. Not only is this new fast radio burst, named FRB 20191221A, another extremely rare repeater, but it's not even that fast: the radio flashes received across intergalactic space are three seconds in duration, about 1,000 times longer than average. 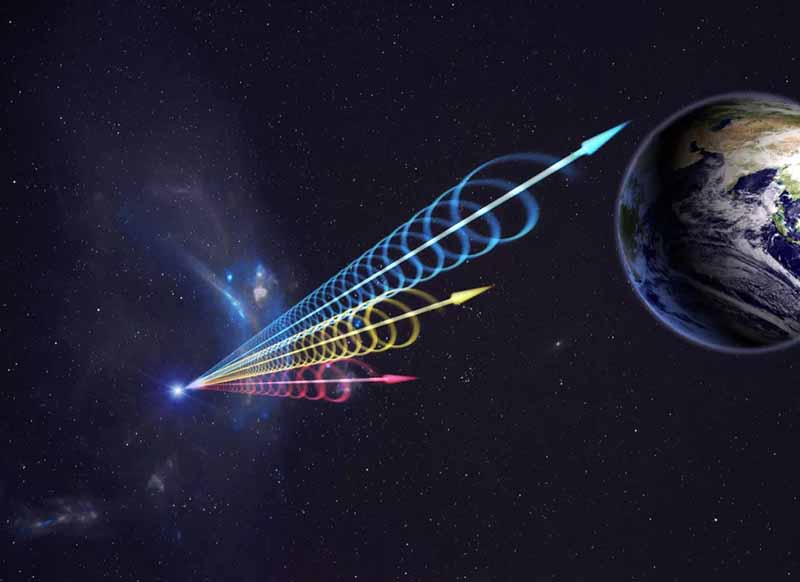 Astronomers have used two of the world's largest radio telescopes to discover the second-known example of a new type of fast radio burst (FRB) - the mysterious, extremely powerful explosions of radio waves that pulse through space thousands of times a day. The new FRB, called FRB 190520, is strong evidence that multiple celestial objects could be the source of these enigmatic signals. The new object is the second detected that not only produces repeating FRBs, but that also emits a constant source of weaker radiation in between eruptions.


Physicists Have Found a Way to Simulate The Beginnings of Fast Radio Bursts   Science Alert - May 25, 2022

Fast radio bursts are one of the biggest cosmic mysteries of our time. They're extremely powerful but extremely brief explosions of electromagnetic radiation in radio wavelengths, discharging in milliseconds as much energy as 500 million Suns.

Located in the Okanagan Valley outside of Penticton, British Columbia, there is a massive radio observatory dedicated to observing cosmic radio phenomena. It's called the Canadian Hydrogen Intensity Mapping Experiment (CHIME), a cylindrical parabolic radio telescope that looks like what snowboarders would call a "half-pipe". This array is part of the Dominion Radio Astrophysical Observatory (DRAO), overseen by the National Research Council (NRC).

Originally, the observatory was meant to detect radio waves from neutral hydrogen gas in the early Universe. Today, it is used for other objectives, such as detecting and studying Fast Radio Bursts (FRBs). Since it became operational, CHIME scientists have been busy sorting through terabytes of data to pinpoint signals, often finding several in a single day. To assist with all this data-mining and coordinate CHIMEs efforts with other facilities worldwide, scientists from McGill University have developed a new system for sharing the enormous amount of data CHIME generates. The first FRB, the famous Lorimer Burst, was detected in 2007 by West Virginia University astronomer Duncan Lorimer and his colleagues using the Parkes Radio Telescope. Since then, these transient radio pulses that often last mere milliseconds have been a source of mystery and intrigue to astronomers. Before CHIME became operational in 2018, astronomers had detected only a few dozen FRBs. Since then, CHIME has been responsible for detecting over 1000 signals!


First Radio Emission Received From a Planet Outside of Our Solar System   Mysterious Universe - December 19, 2020 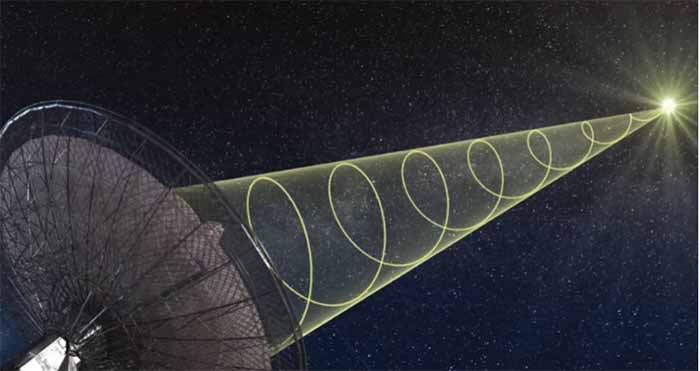 Astronomers May Have Detected The First Radio Signal From an Exoplanet   Science Alert - December 19, 2020

Mysterious radio signals from deep space detected   BBC - January 9, 2019
Astronomers have revealed details of mysterious signals emanating from a distant galaxy, picked up by a telescope in Canada. The precise nature and origin of the blasts of radio waves is unknown. Among the 13 fast radio bursts, known as FRBs, was a very unusual repeating signal, coming from the same source about 1.5 billion light years away. Such an event has only been reported once before, by a different telescope. Knowing that there is another suggests that there could be more out there. And with more repeaters and more sources available for study, we may be able to understand these cosmic puzzles - where they're from and what causes them. The telescope only got up and running last year, detecting 13 of the radio bursts almost immediately, including the repeater. 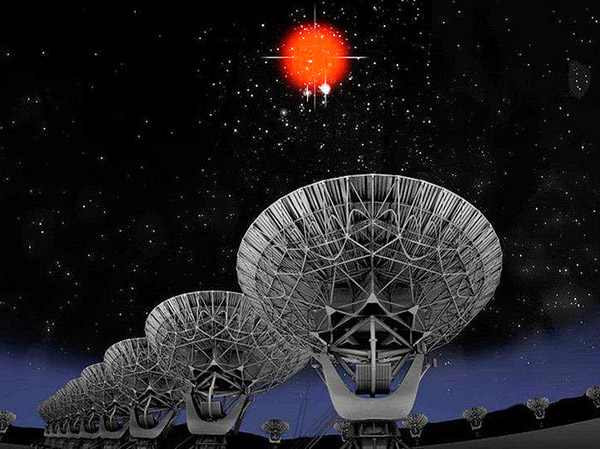 As the name suggests, Fast Radio Bursts (FRBs) are short-lived - but powerful - pulses of radio waves from the cosmos. Their brevity, combined with the fact that it's difficult to pinpoint their location, have ensured their origins remain enigmatic. Outlining their work at a major conference, astronomers say they have now traced the source of one of these bursts to a different galaxy. It's an important step to finally solving the mystery, which has spawned a variety of different possible explanations, from black holes to extra-terrestrial intelligence. There are more theories for what these could be than there are observed bursts.