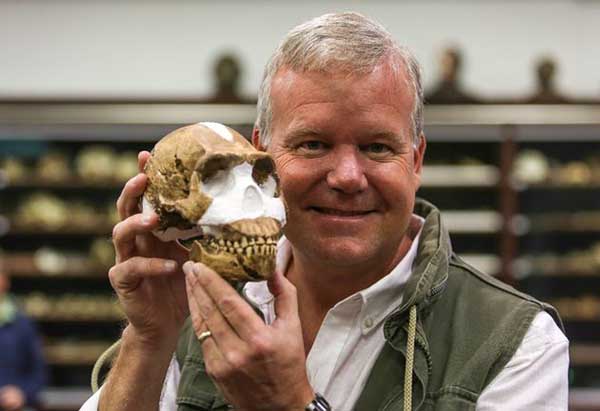 Homo naledi is a species of the tribe Hominini, extant during the late Pliocene or early Pleistocene epoch, between roughly 3 and 2 million years ago. H. naledi was discovered in 2013 in Rising Star Cave in South Africa. The remains of fifteen individuals were found during the initial investigation, and scientists believe more remain. The fact that the bones were disposed of together suggests possible ritualistic behaviour in the species.

H. naledi stood approximately 150 centimetres tall, and analysis of its skeleton suggests it stood upright and was fully bipedal. However, the species' brains were markedly smaller than modern Homo sapiens, measuring between 450 and 550 cubic centimeters. It is believed the bones may have belonged to members of a family, as their features are strikingly similar.


Homo naledi: Hands, feet suggest 'jack of all trades'   BBC - October 6, 2015
The human ancestor Homo naledi was something of an all-rounder, able to move efficiently on the ground but also adept at climbing in trees. Scientists have just published a second batch of papers on the creature whose remains were sensationally found deep inside a South African cave. The scholarly articles focus entirely on naledi's hands and feet. Its feet were clearly those of a walker while the hands had curved fingers to grasp and hold on to branches. But the hands also show a remarkable level of modernity that is only really evident in late Homo species, such as today's humans and our now extinct cousins, the Neanderthals.


<Homo naledi: New species of human ancestor discovered in South Africa   CNN - September 10, 2015
When an amateur caver and university geologist arrived at Lee Berger's house one night in late 2013 with a fragment of a fossil jawbone in hand, they broke out the beers and called National Geographic.