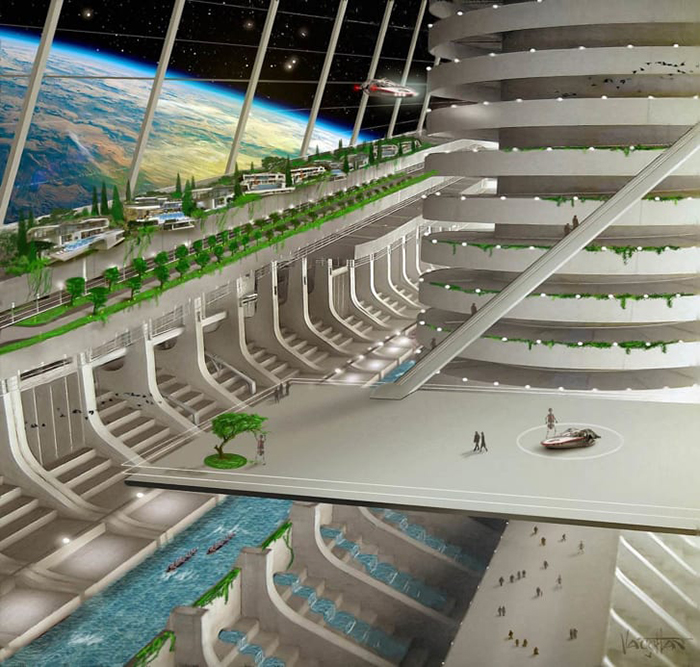 Asgardia Nation is an interesting undertaking that eventually hopes to have a colony in orbit - but it is very expensive. There are money and other issues happening affecting the project.

The first space nation is already in trouble: Billionaire founder of 'Asgardia' says he faces earthly problems over taxes, currency and who should lead   Daily Mail - August 30, 2017
Ambitious plans to launch a 'space nation' called Asgardia already appear to be running into very Earth-like problems. Hatched by an international group of scientists and backed by a Russian billionaire, the floating nation is set to take its first step into space later this year with the launch of its maiden data satellite. However, the team behind the plan are having difficulties organizing his new country - including how the political system will work and what currency will be used.


Asgardia, officially known as the Space Kingdom of Asgardia, is a proposal for a nation announced on October 12, 2016 by Igor Ashurbeyli, the founder of the Aerospace International Research Center and Chairman of UNESCO's Science of Space Committee. The proposed nation intends to access outer space free of the control of existing nations, and to be recognized as a nation state.

Asgardia intends to launch a series of satellites into orbit, and has announced that the first will be delivered to space by Orbital ATK in September 2017 as part of an International Space Station resupply mission. It will be a CubeSat measuring 10x10x20cm at a weight of 2.8kg, will be manufactured and deployed into orbit by NanoRacks, and has been named Asgardia.

The nanosatellite will be a file storage device pre-loaded with things like family photos supplied by the first 1,500,000 members, with subsequent data being uploaded or downloaded using the Globalstar satellite network. That it is being boosted to space and then deployed by US companies on a NASA-funded mission means that the satellite will fall under US jurisdiction.

Asgardia intends to partner with a non-signatory to the Outer Space Treaty (OST), perhaps an African state such as Ethiopia or Kenya, in the hopes of circumventing the OST's restriction on nation-states claiming territory in outer space. The satellite is expected to have a lifetime of 5 years before its orbit decays and it burns up on reentry.

Often described as a billionaire, Ashurbeyli has said that he is currently solely responsible for funding Asgardia, and that members will not be funding the planned first satellite launch. Although the cost has not been made publicly available, NanoRacks have said that similar projects cost $700,000. The project intends to move to crowdfunding to finance itself. Sa'id Mosteshar, of the London Institute of Space Policy and Law, says this suggests that Asgardia lacks a credible business plan. A company, Asgardia AG, has been incorporated, and members can buy shares in it. Read more