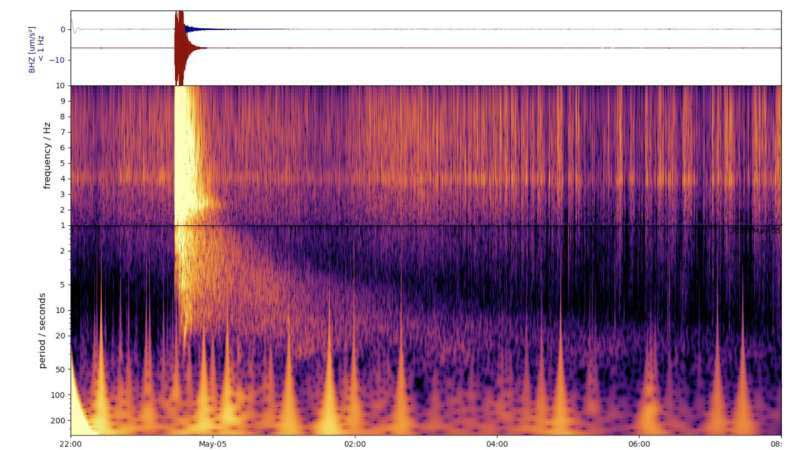 'Monster' Quake on Mars Is The Biggest Ever Recorded on Another Planet, NASA Says   Science Alert - May 11, 2022
In terms of seismic events on the red planet (or indeed any other planet besides Earth), this is the biggest one recorded so far: the NASA InSight lander has recorded a 'monster' of a marsquake, which is estimated to have hit magnitude 5 on the scale used on Earth.


NASA's InSight records monster quake on Mars   PhysOrg - May 10, 2022
NASA's InSight Mars lander has detected the largest quake ever observed on another planet: an estimated magnitude 5 temblor that occurred on May 4, 2022, the 1,222nd Martian day, or sol, of the mission. This adds to the catalog of more than 1,313 quakes InSight has detected since landing on Mars in November 2018. The largest previously recorded quake was an estimated magnitude 4.2 detected Aug. 25, 2021.


Why Is NASA Looking for 'Marsquakes'?   Live Science - November 26, 2018
With a design inspired by the older Mars lander Phoenix, this next-generation machine will extend its robot arms and place a seismometer - a device that measures quakes - onto the surface of Mars. If all goes well, for two Earth years (one Mars year), it will listen for vibrations that happen beneath the surface of the planet, to answer some fundamental questions about how rocky planets, including our own, formed. But what are marsquakes, and why are NASA scientists hunting for them?

Marsquakes, just like earthquakes, are vibrations that move through the ground. But the way these quakes form on the Red Planet may be fundamentally different from how they form on Earth. And it turns out that these differences could help scientists better understand what early Earth looked like.

Mars doesn't have a fragmented outer shell like Earth does. So how does it still have quakes? Well, it turns out, other phenomena can also cause these seismic waves, such as the stress of a slightly shrunken surface caused by planetary cooling, the pressure of magma pushing up toward the surface or even meteorite impacts, according to NASA.